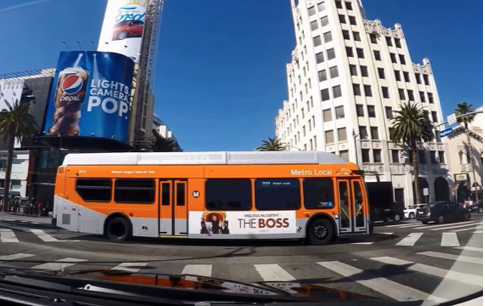 TRANSPO WATCH--To most of us, building a new highway, a new rail line, or a new bikeway (or any other mobility-oriented project) involves something that combines benefits to our Economy, Environment, and Quality of Life.  Such a project should allow for greater mobility/freedom, and perhaps enhance the ability of ALL of us to financially benefit … hence the need for public funding.

For example, we can debate the suitability of finishing our carpool lane network on the 405 freeway, but the upgrades to the on/off ramps and the potential of more buses on that carpool lane did, and does, potentially help us all.

And, for those who remember, we've finally finished the long-overdue 21st century upgrades to the 405 freeway and its connections to the 101 freeway that not long ago were bemoaned by Caltrans as being nowhere in sight. So for those who have a good memory and can keep it together, we've actually done some great things.

And we can repeat our efforts to put long-awaited and vital projects in our rear-view mirror while being able to tackle new projects once considered impossible to do--but there will be blowback if we let our transportation efforts get hijacked by do-gooders, self-serving profiteers, and short-sided thinking:

Once we get past the rhetoric about Millennials eschewing cars because they love the environment, we reach a more accurate view of the problem:  driving really sucks.  The stress, the money, and the time wasted all combines for a jaw-dropping decrease in the quality of one's life.

Hence we want more options--but we don't have any room for more freeways in the urban core of Los Angeles, so the need for a rail option is critical, and it must be cost-effective.

And let's get real, and intellectually honest:  we've got lots of "transit champions" who go everywhere in their cars.  We've also got lots of environmentally-aware Millennials and Baby Boomers who realize that (gasp!) they still need a car to get around ... particularly if one has a family.

Hence the benefits of a High Desert Corridor that utilizes the public resources of LA and San Bernardino Counties, and the private sector, to establish a freeway, a high-speed rail right of way between the CAHSR and Las Vegas, energy lines and a bikeway.  Something for everyone, because everyone will pay for it.

2) Passenger rail lines, as with all infrastructure, must be paid for and maintained.

Believe it or not, there are metrics that the federal government uses when it tries to predict the most cost-effective transportation projects.  Not just the total costs but the cost per passenger/user are factored in (or at least calculated with an educated guess).

That said, politics too often eclipse math and science.  The most expensive passenger rail lines are often the most expensive--as in, they're cheaper to build in suburban/middle-sized cities, but don't have that many passengers.  New York City and L.A. are excellent to build but more expensive because they're large and already built up.

Furthermore, maintenance has to also be considered, and so far only LA has really focused on funding both New Starts and maintaining old lines.  Yet the Blue Line is one of the most heavily-used lines in the nation, and even the Green Line is pretty well-used (and, of course, the Expo and Gold Lines are impressive compared to other cities).

But the same is true for freeways and roads, and the contempt we're seeing from too many towards repairing car-oriented infrastructure is as inappropriate as those who disdain improving our passenger rail lines.

3) Transportation is NOT for Social Engineering, Overdevelopment, or to House the Homeless.

I've not made any bones about my past and present service for my Neighborhood Council or for the "world of transportation".  I lean towards safety, security, cost-effectiveness, and a transportation/planning effort that's comprehensive and benefits the majority who pay for it.

Vision Zero is a great idea, but it's showing "zero vision" if it thrashes the rights of the majority who pay for our transportation system.  The need for Class I bikeways along the Expo Line and flood control channel for long-term distances, and the need for safe and excellent access to business destinations is critical, but beating up on car motorists isn't the answer.

Case in point: while the naysayers of the Venice Blvd. road diet are entirely guilty of organizing too little too late, they probably have an excellent chance of winning a lawsuit should they make one against the City.

Venice Blvd. is a secondary highway, and placing bikeways on freeways and secondary highways poses grave risks to commuters of all modes, to say nothing of slamming a square peg into a round hole just because it "feels right".

I will continue to advocate for a safe and protected bike lane that still establishes three car lanes and encourages parking structures to free up the woefully-outdated and cost-ineffective current parking lanes on Venice Blvd.

Bike routes that are on safe residential streets are also good for secure, long-distance bicycle commutes, particularly during rush hour.

And on another level, safety and security is an issue.  Crime and the homeless using public transportation and public venues as a place to set up shop is NOT appropriate in a civilized society paid for by taxpayers.  And NO, this doctor (who treats the poor and homeless every day) writing this piece understands the plight of the homeless, perhaps more than most reading this.

So the Orange Line bike lane path becoming a homeless mecca, and not allowing its users to feel safe, is a BIG problem.  Much of the reason Mar Vista and Del Rey rejected an extension of the Ballona Creek/river channels as a bikeway route was because of this threat.

A big problem with my/our goal at the Mar Vista Community Council to establish more first-rate bus shelters with LED signage to announce oncoming buses and protect from the elements is because of the risks of homeless living in those shelters, and the drastic actions of cities like Anaheim to prevent homeless from living in bus shelters is proof that this problem is very real.

It's up to the reader to conclude whether I am plagued with a lack of compassion or benefited by a healthy dose of common sense and science, but I do mean well for all interested parties.

And for what it's worth I've never been paid a dime for any of my efforts ... although I wish I could say the same for those with ulterior motives or agendas that fly in the face of what is meant to be The Public Good.