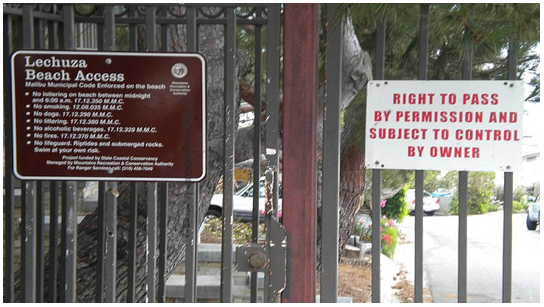 GELFAND’S WORLD--We are the west coast -- accent on that word coast. What makes California different from Nebraska and Colorado is that we have an ocean. We have sea cliffs, beaches, and kelp beds you can explore underwater. We even have the remains of a shipwreck that you can walk right up to, at the base of a local cliff. Californians take pride in the fact that the beach and the water belong to all of us. But it's not a done deal in all places.

As a recent op-ed by Chad Nelsen explains, our ability to make use of our shoreline is not always guaranteed. That's because of those who have the money to (illegally) block our access. Nelsen's discussion refers to a beach in Northern California, but we have had the same conflicts in southern California for decades. The fight for coastal access is important to hikers, surfers, divers, photographers, and those who would simply like to enjoy a bit of solitude.

Here is the story of Martin's Beach as told by Chad Nelsen:

"The small cove in San Mateo County known as Martins Beach, just south of Half Moon Bay, was used regularly by the public for at least a century – until 2010, when the Silicon Valley billionaire and co-founder of Sun Microsystems Vinod Khosla locked a gate on the only road that provides public access to it.

"Khosla had bought 89 acres of coastal property surrounding Martins Beach two years before. He had been warned by San Mateo County and the California Coastal Commission – before and after buying the property – that he would be required to keep the public access open. Public access to Martins Beach, and to all land seaward of the mean high tide line in California, is guaranteed in the state’s constitution and mandated within the Coastal Act of 1976. Khosla closed it anyway, and he has kept it closed despite personal pleas and a legal order to reopen it."

There are two points to understand. One is that you have the right to be on the beach or in the ocean. Technically, the right is limited to the places below the mean high tide line, but if you are in that area, the guy who owns a house up the beach has no right to throw you out. This is not at issue legally, even though it has been common practice for rich property owners to attempt to bully people who are wandering past their homes in the Malibu area.

The other point is that the Coastal Act was instituted to (among other things) protect and preserve the public's access to the Pacific ocean and to the beach.

We've had some bruising battles here in the Los Angeles area. The most famous case involved David Geffen, who finally allowed public access to the beach after a years-long legal battle.

Up north, there is the current battle that stars billionaire Vinod Khosla. Interestingly enough, Khosla has enjoyed a reputation as a friend to environmental causes. In the case of Martin's Beach, he's not trying to damage the environment by building a condominium community or a marina. In a way, he is protecting the beach from the use of humans. But the Tidelands Act and the Coastal Act were not designed to prevent all human visitation of the coast. They were designed to provide for controlled human use. For purposes of our discussion, the laws were meant to balance the interests of the public who would like to visit the beaches with the interests of those who own the immediately adjacent properties.

If you read Nelsen's op-ed or the links he provides, it is obvious that Khosla has been moderately effective in confusing the issues legally. Is he required to provide access on precisely the same road that has been used for the past century? Is there or is there not a public right to use that road (an easement) that has been created due to uninterrupted usage?

These may be interesting questions to legal junkies, but the reality is that courts have ordered that the public be allowed to enter Khosla's property in order to have access to Martin's Beach, and Khosla has not obeyed.

So here is my question: Why haven't local authorities in San Mateo County and here in Los Angeles County gone to court and asked that the land owners be held in contempt and thrown in jail until they obey the court? I suspect that Geffen would have settled a lot earlier if there had been personal risk. There would not be protracted stalling over Martin's Beach if Khosla were under the same risk.

Perhaps this sort of action would ultimately end up in the Supreme Court since it potentially involves Fifth and Fourteenth Amendment considerations. But at least then we would have a defined mechanism for protecting the public's rights.

In the meanwhile, the Coastal Commission is flexing its muscles through a new state law which allows the Commission to levy fines. Perhaps a multimillion dollar fine will be successful in the more egregious cases. The Commission has already fined one Malibu property owner more than four million dollars. Whether this approach would work with billionaires is another question.

On a different note, we have the failure of local government to take advantage of ready opportunities to make beaches and tidelands available as a public asset. Two rather different examples are within a couple of miles of each other within the San Pedro area. One is the place known to locals as the sunken city. The other is the old Boy Scout camp on the beach next to Cabrillo bay.

The sunken city is a small area in which a section of cliff slid down towards the ocean. What is left is a small rocky area along the shore and a sort of peninsula with a paved road, markedly tilted, a little bit offshore. It is a local curiosity that draws dozens of visitors at a time, but is technically illegal to enter. The city has fenced it off from the public, using the excuse that the city would face liability should someone be injured. The argument seems forced and frankly a little silly. One might ask why the city still allows us to operate motor vehicles on public roads. In any case, sunken city is officially closed to the public.

There is an area within Cabrillo Beach which used to be under a 30 year lease to the Boy Scouts of America. It remains in legal limbo. The city could reclaim its land, pay the Boy Scouts for the improvements (at a value considerably depreciated from the original cost, say a million dollars or so) and make it available to the public. There would be some cost to operating it, but it would be similar to operating other venues such as public swimming pools and golf courses. Getting the Cabrillo Beach location available to public access won't even require fighting the billionaires. Compared to Martin's Beach, this should be an easy decision.

(Bob Gelfand writes on science, culture, and politics for CityWatch. He can be reached at amrep535@sbcglobal.net.)