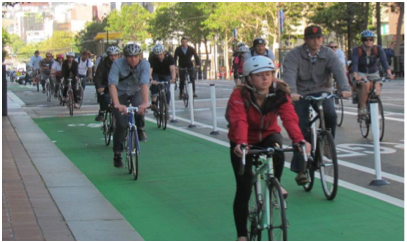 ROAD DIET OVERDOSE, PART 2-The City has been sued – again! This time it is due to its desire to expose children to toxic fumes while they are exercising. See HELP and CCLA v City of Los Angeles, BS 157813. Previously, these groups have prevailed in the Hollywood Community Plan case and in the Target case. Both times the City lost because it refused to follow the law.

Governance by litigation is dumb, but some people never learn, which is why Los Angeles is being governed that way. In addition to the two above cases, there is also the Gower & Hollywood Project where the court ruled against the city; the $1.3 billion Americans with Disability case where the federal courts ruled against the City; the current federal lawsuit about the misappropriation of millions of dollars in HUD funds; the Millennium Towers case where Judge Chalfant threw out the project; the Hollywoodland case which the city lost at trial court and the appellate level; and finally, the 5929 Sunset case where the court ordered all the tenants to vacate.

Why is the Garcetti Administration once again forcing the public to sue the City? Because the Administration wants to deny medical science: bike lanes in major thoroughfares pose a health risk to our children. Thankfully, not all councilmembers agree with the Mayor that giving cancer to kids is a wise thing.

If we pumped exhaust fumes into the gym during a high school basketball game, people would be outraged. When the City places bike lanes on major thoroughfares where auto emissions are the most toxic, the Garcetti Administration cheers, “right on.”

We have a City Administration which is so insistent that our children have maximum exposure to toxic auto emissions, that for over two years, it has opposed any research into moving those bike lanes to less toxic locations.

HELP’s and CCLA’s lawsuit is over the Garcetti Administration’s refusal to conduct any studies into the safest places to locate bike lanes. Scientific evidence from around the globe shows that major streets are the worse places to build them.

According to an NIH, US Library of Medicine, June 14, 2011 article, “…Nevertheless, individual commuter cyclists may still be exposed to increased levels of air pollution because they are often in close proximity to vehicle emissions. In particular, increased minute ventilation during cycling may result in substantial increases in inhaled doses of fine (= 2.5 µm in aerodynamic diameter) particulate matter (PM2.5) and ultrafine (= 0.1 µm in aerodynamic diameter) particles (UFPs) because vehicle emissions are a major source of these pollutants (Int Panis et al. 2010; Thai et al. 2008; Zuurbier et al. 2010). Furthermore, although few studies have examined the acute health effects of air pollution exposures among cyclists, time spent cycling in traffic was associated with an increased risk of myocardial infarction in a case-crossover study conducted in Germany.”

Will the Garcetti Administration even consider studying the harmful health impacts to our children? Absolutely not. No studies will be allowed.

Why is the Garcetti Administration so adamantly opposed to these studies? Why would he not want to know how much better it would be to put bike lanes on side streets? The reason is easy to discern. This administration believes that the function of bikes lanes is to make traffic congestion worse. Even if children deeply inhale fine particulate matter into their lungs, it’s a small price to pay in the war on the demon car.

As most people realize, Garcetti not only has been waging war on single family homes, (except for his family’s and those of other trust fund babies,) but also has declared war on the personal car. Thus, anything that makes operating a vehicle in Los Angeles more difficult is good. Road Diets, which are made by adding bike lanes to major streets, make auto travel less efficient. Unfortunately, they also increase toxic auto emissions by slowing down cars and causing more stop-and-go traffic.

Each time the Garcetti Administration is sued, we find the same hubris being displayed: the refusal to follow the law. With the Target store in Hollywood, for example, the city thought it could avoid undertaking an Environmental Impact Report [EIR], but the courts, right up to the Supreme Court, rejected Garcetti’s position.

Immediately after that loss, his Administration made the same error, thinking it could build the illegal Target Store by amending the Specific Plan, SNAP, without conducing an Environmental Impact Report (EIR). La Mirada, CCLA and others told the city that it may not ignore the law. It had to conduct an EIR. An EIR study, however, would allow citizens to present facts to explain the harmful impacts of adding a Subarea F to SNAP. Also, the public would learn that Target is free to build a store in Hollywood and it is the Garcetti Administration that refuses to give them a permit. The court agreed that the City needs to follow the law and conduct an EIR when amending SNAP.

Who knows what Judge Hogue will rule about bike lanes and whether the City can legally expose thousands of children to the most concentrated toxic fumes without conducing an EIR? Maybe she believes cancer is good, that adversity builds character. Maybe she will rule that ignorance trumps science, and thus, Angelenos do not need to know about safer alternatives. On the other hand, Judge Hogue may think that the City should follow the law. Under CEQA, there is a fair argument that the City should conduct an EIR into the adverse health impacts of constructing bike lanes in major streets.

The Bike Lane lawsuit boils down to this: Which is better ignorance or knowledge? The Garcetti Administration has chosen ignorance. We trust that Judge Hogue will chose knowledge.

HELP/CCLA presented over twenty studies similar to the following: