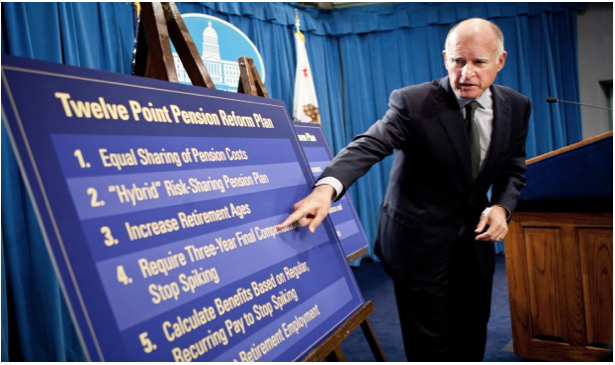 LOOMING PENSION PAIN--The Jerry Brown administration last week released its revised May budget and, lo and behold, it has finally decided to (kind of, sort of) tackle the state’s massive and growing level of unfunded liabilities – i.e., the hundreds of billions of dollars in taxpayer-backed debt to fund retirement promises made to the state’s government employees.

It’s best to curb our enthusiasm, however. The governor didn’t have much of a choice. This was the first state budget that is compliant with new accounting standards established by the Governmental Accounting Standards Board that requires states to more properly account for retiree medical and benefits beyond pensions.

Because of those new standards and low investment returns, the state’s unfunded liabilities (including the University of California retirement system) soared by an astounding 22 percent since last year. But even this new estimate of $279 billion in liabilities is on the optimistic side. Some credible estimates pin California state and local governments’ pension liabilities at nearly $1 trillion, based on more realistic rate-of-return predictions.

The pension system invites eyes-glazing-over debates about the size of the liability. That’s because debts are calculated on guesswork about future investment earnings. The California Public Employees’ Retirement System (CalPERS) recently voted to lower its predicted rates from 7.5 percent a year to 7 percent. The lower the predicted rate, the higher the liabilities, which is why CalPERS and the state’s unions are so bullish on Wall Street.

CalPERS’ latest investment returns were below 1 percent, but the agency insists there’s nothing to worry about and no need to do the unthinkable (reduce future benefit accruals for current employees.) That’s the same CalPERS, of course, that in 1999 assured the Legislature that a 50-percent retroactive pension increase wouldn’t cost taxpayers a dime.  I suppose CalPERS was right. It didn’t cost a dime, although it did cost many billions of dollars. Their returns were then yielding 13.5 percent a year, and CalPERS figured the heyday would go on forever.

The other reason to be skeptical of the Brown administration’s commitment to solving the problem can be found in the May revise itself. The budget “includes a one‑time $6 billion supplemental payment” to CalPERS, according to the Finance Department. “This action effectively doubles the state’s annual payment and will mitigate the impact of increasing pension contributions due to the state’s large unfunded liabilities.”

Where is the extra $6 billion coming from in a budget that supposedly is so pinched that the governor recently signed a law raising annual transportation taxes by $5.2 billion?

Simple. The state is borrowing the money to pre-pay some of its debt. “The additional $6 billion pension payment will be funded through a loan from the Surplus Money Investment Fund,” according to the budget summary. “Although the loan will incur interest costs (approximately $1 billion over the life of the loan,) actuarial calculations indicate that the additional pension payment will yield net savings of $11 billion over the next 20 years.”

In other words, the state will be borrowing the money at fairly low interest rates and then investing the money and earning, it hopes, higher rates. The difference will help pay down some of those retirement debts. Even the well-known pension reformer, Sen. John Moorlach, R-Costa Mesa, lauded the administration for embracing that idea.

But it’s something of a shell game. It should work out well, provided the markets do as well as the state expects. In doing this, however, the state is taking out new debt that will need to be repaid. There’s no free money here. A number of localities have embraced a similar strategy with pension-obligation bonds, which are a form of arbitrage, in which the government is borrowing money and betting on future market returns.

This gimmick is similar to the one people will embrace in their personal lives. Are those credit-card debts crushing the family budget? Then borrow money from the home-equity line of credit at 5 percent and use it to pay down the 10-percent credit card loans. It makes sense, but it doesn’t deal with the real problem of excessive consumer spending.

“This is the Band-Aid,” said Dan Pellissier, a former aide to Gov. Arnold Schwarzenegger and well-known state pension reformer. “The surgery everyone is trying to avoid is on the California Rule – changing the benefits public employees receive in the future.”

When it comes to pensions, everything comes back to that “rule,” which isn’t a rule but a series of court precedents going back to the 1950s. In the private sector, companies may reduce pension benefits for their employees in the future. An employee can be told that, starting tomorrow, she will accrue pension benefits at a lower rate. The California Rule mandates that public employees, by contrast, can never have their benefit levels reduced.

That limits options for reform. In 2012, Gov. Brown signed into a law the Public Employees’ Pension Reform Act (PEPRA), which promised to address the pension-debt problem by primarily reducing benefits for newly hired employees. A reform that affects new hires will reduce contribution rates but won’t make an enormous difference until they start retiring.

“Gov. Jerry Brown’s attempt at pension reform has failed,” opined Dan Borenstein, in a recent East Bay Times column. The reason: the rapidly growing pension debt. “The shortfall for California’s three statewide retirement systems has increased about 36 percent. Add in local pension systems and the total debt has reached at least $374 billion. That works out to about $29,000 per household.”

CalPERS rebutted Borenstein by arguing that he “greatly oversimplifies and needlessly discounts the real impact that Governor Brown’s pension reform has had since it took effect in January 2013.” The pension fund insists, “PEPRA already is bending the pension cost curve – and will keep doing so with greater impact every year going forward.”

Yet the growing liabilities and the administration’s latest budget plan suggest that whatever minimal cost savings PEPRA is achieving aren’t nearly enough. Of course, union-controlled CalPERS’ goal isn’t protecting taxpayers or the state general fund – it is to enhance the benefits of the state workers whose pensions it manages.

As Calpensions explained, that $6 billion of borrowed money doubles the amount of general-fund dollars that the state is paying to deal with pension obligations. Meanwhile, as the state borrows money to pay that tab, it raises taxes to fund transportation. If Brown and the Legislature had trimmed pension costs, it would not have needed to raise gas taxes and the vehicle license fee. And the problem reverberates for local governments, too.

The May revise also showcased the same old issue with the administration’s priorities. Los Angeles Times columnist George Skelton noted that “Brown’s entertaining rhetoric itself made him sound, as usual, like a skinflint, a penny-pinching scold. But the introductory document could have been written by Bernie Sanders, if not Depression-era Socialist Upton Sinclair, the losing 1934 Democratic candidate for governor who ran on the slogan ‘End Poverty in California.’”

The budget championed myriad big-spending programs, including higher pay for public employees. So the state has been spending like crazy, but can’t manage to deal with its pension problem – at least not without borrowing money to temporarily paper over its growing debt.

All these games are about avoiding dealing with the obvious fact that California’s public-employee pensions are absurdly generous, filled with costly and anger-inducing features (spiking, double-dipping, liberal disability retirements, etc.) and unsustainable.

In 2011, the state’s official watchdog agency, the Little Hoover Commission, argued to the governor that “Public agencies must have the flexibility and authority to freeze accrued pension benefits for current workers, and make changes to pension formulas going forward to protect state and local public employees and the public good.” Six years later, the governor is still just chipping away at the edges by embracing gimmicks.

(Steven Greenhut is a contributing editor to the California Policy Center, on whose website this piece originally appeared. He is Western region director for the R Street Institute. Write to him at [email protected].) Prepped for CityWatch by Linda Abrams.