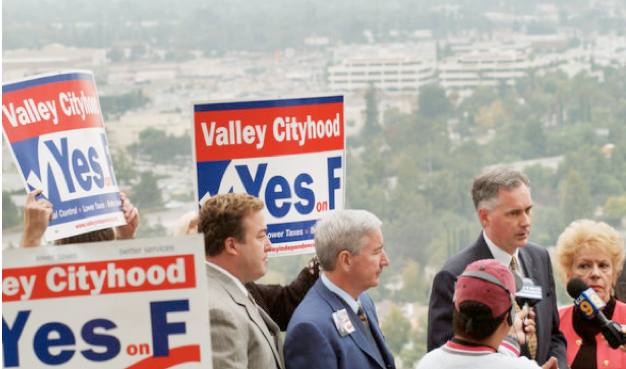 15 CANDLES---(Editor’s Note: It has 15 years since Los Angeles certified its first Neighborhood Council … Wilmington Neighborhood Council … in December of 2001. The ’15 Candles’ campaign celebrates the occasion, looks back at the early days and considers the future of LA’s NCs. Jerry Gaines served on the Appointed Reform Commission and remembers how it all began.)

The City of Los Angeles experienced a renaissance in its governance structure during the last half of the 20th Century, brought on in part by events related to the desire by parts of the 461 Square Mile city to secede from Los Angeles. Economic, social, cultural, and political forces interacted to kick start action to “break up” the entrenched power of the city’s existing government structure.

The general belief was that the downtown government power drew economic benefits from areas such as the San Fernando Valley and the Harbor without returning desired economic growth and support in those parts of the city. The progressive history of Los Angeles led to a weak Mayor, and defused power among the City’s 15 Council Members, the City’s Controller, and the various city department heads and commissions.

The result after months of public hearings and debates held by the two dueling commissions led the respective Chairs to seek a unified Charter to present to the voters, realizing there was little chance separate work products could get majority support from the voters. This effort was successful as the voters approved the Unified Charter by over 60%. In effect the Elected Charter Reform Commission (like the House of Representatives) and the Appointed Charter Reform Commission (like the Senate) came together to craft the new Charter.

Aside from the defining the power of the Mayor and Controller as well as oversight of the city’s department heads and commissions, efforts were made to address the grass roots frustrations between the various communities and the central government. Seven Area Planning Commissions and a Neighborhood Council System were part of the restructuring of the city governance program to craft improved interaction between the central government and the diverse communities throughout the 461 square miles of the city.

In regard to crafting the neighborhood council system, I and other interested parties such as Greg Nelson (later a former department head of DONE), and Dr. Raphael Soneshein (Appointed Commission Executive Director) traveled to other cities to study adopted neighborhood council systems. St. Paul, Minnesota and Portland Oregon had experience with such systems. Work was then done to draft a section of the Unified Charter (Sec. 900) to build a framework for such a system. After voter approval, this led the City Council to adopt an ordinance on May 25, 2001 to set in motion the system of establishing neighborhood councils.

Over the past fifteen years efforts have been made to evaluate and modify various elements of the neighborhood system. The intent for those of us framing the program was for local neighborhood councils to in effect simulate in concept a New England style of town hall council with a goal of each of them representing some 20,000 to 40,000 residents. They were defined as advisory (not quasi judicial, etc.) so that membership could include stakeholders from those living, working, owning property or other defined interests with a nexus to the local community.

There have been challenges for sure, focused on relationships between the formal government oversight (DONE) and local autonomy of neighborhood councils to address diverse community interests. The framers intent was to facilitate a grass root line of communications to the formal city policy makers (elected and appointed). We included an early warning system requirement (Sec. 907) to help here. Also budget input was required (Sec. 909). And DONE was to be stand alone (Sec. 913).

Observations on my part indicate that there has been optimism from many observers engaged with the neighborhood council system, notwithstanding challenges in city finances, specific local political polarized issues, and the learning curve for new members volunteering civic service to this aspect of LA City governance. The more recent establishment of the Leadership Academy led by the Cal State Los Angeles Pat Brown Institute (headed by Dr. Raphael Sonenshein ) is a sign of a broader effort to bring interested stakeholders into an opportunity to contribute to the betterment of local communities. The annual gathering of delegates coming together has demonstrated engaged interest in taking ownership of seeking solutions to specific community issues and learning from each other. Collaboration with trust is a way to solving civic issues, whether it is within a city block, a defined neighborhood, or the city of some four million in population.

(Jerry Gaines served on the Los Angeles City Appointed Charter Reform Commission, one of two commissions responsible for creating neighborhood councils. This is one in a series of stories and videos on Los Angeles Neighborhood Councils 15th birthday.) Edited by Doug Epperhart.