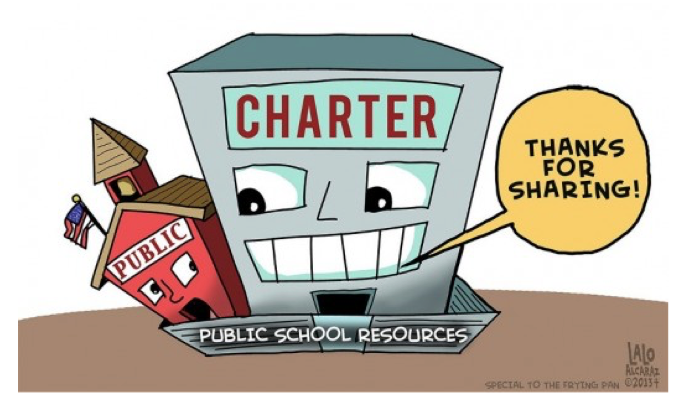 EDUCATION POLITICS-The pro-privatization LA School Report (LASR) spun a school board committee meeting report last month to say that just about everybody in LAUSD wants charter schools to be included in a universal enrollment system. This was alarming since universal enrollment is an urgent priority of the charter lobby.

“Common enrollment is a big Walton idea to put charters on the same footing as public schools,” education historian and national treasure Diane Ravitch told me in an email.

Whether they call it universal enrollment, common enrollment, unified enrollment, or OneApp, charters want to piggyback on the establishment. Always insisting that they are “public schools,” they want to be viewed that way by every parent, “regardless of zip code.” Similar enrollment systems in New Orleans and Denver were funded by the pro-charter Walton Family Foundation.

Yet the headline to the meeting recap cheered, “All sides push for earlier inclusion of charters as LAUSD readies its Universal Enrollment site.”

This caused a bit of a stir because the article said that even the privatizers’ nemesis, UTLA, was on board.

“One of the committee members, Robin Potash, a teacher representing UTLA, said it was important for the district to include charter schools in the list of options and to do it faster than their present timeline….“We all know there are many new charters opening in the district and they should be included as soon as possible,” Potash said. “These are all our students and they should be listed as options.”

Given that universal enrollment is such a boon for charters, could it be true that there is consensus among the California charter lobby, the UTLA representative and all three LAUSD board members on that committee?

I called UTLA’s Robin Potash to find out if LASR quoted her accurately.

She explained that her comments at the meeting came after a rosy presentation by the LAUSD School Choice department. (You can watch here.)

One LAUSD staffer said it was like a shopping cart. “What this will allow parents to do now is a one stop shop.”

We’re “hoping to increase the equity and access,” said another.

That resonated with Potash. She said her school, located in South Central LA, has four co-located charters impacting it. She was hopeful that the inclusion of charters in LAUSD’s enrollment application would also bring some much needed oversight of them.

Potash was looking for solutions to a problem that is so common that the ACLU issued a report last year admonishing the one in five California charter schools that were found using discriminatory enrollment practices, according to the report. The NAACP found discriminatory enrollment by charters to be such a significant problem that it called for a national moratorium on charter expansion until that and other issues were corrected.

Maybe including charters in LAUSD’s enrollment process would be a way of making them more accountable for using the standard enrollment methods employed by district schools. At least that’s what Potash hoped.

Last year, California’s State Senate Education Committee held a hearing about charter oversight. The committee was asked to push school districts for common enrollment for the same reasons Potash thought it might help.

In testimony to the committee, Silke Bradford, the Director of Quality Diverse Providers for Oakland Unified School District, suggested that a common enrollment system like New Orleans uses, would go a long way toward providing the oversight and accountability that charters need. You can watch her testimony here.

She said for charter schools to be “pure public schools,” a term she coined to distinguish charter schools that are using public funds transparently from those that are not, they have to do better about including all students. Specifically, she asserted that the increased oversight of a common enrollment system would prevent exclusionary enrollment because all parents would get applications rather than just the parents handpicked by a particular charter or those savvy enough to navigate a complex system. She said charters would no longer counsel out students who proved challenging or expensive to educate. She also thought it would give foster students a better shot at enrolling. Left on their own, charters set application deadlines before foster youth are placed in homes.

To be clear, Bradford is a charter oversight authority -- a former Green Dot Charter School administrator -- who was asking the State Legislature to push districts to enact common enrollment in order to help hold charters accountable for their failure to provide equitable access.

It should not be surprising, then, that someone would sit through a presentation about the wonders of universal enrollment and conclude that it could help provide some oversight that charters are currently lacking.

Plus, LAUSD’s School Choice department was so convincing. You can watch their presentation here.

So it seems the policy makers are all in. What does the research say?

Let’s visit the petri dish -- or swamp -- of charter takeover, New Orleans. Researcher and author, Mercedes Schneider previously examined the New Orleans’ unified enrollment experiment, “OneApp”, in July 2013. That post might have been the most in-depth review of the topic at the time. She said the selective enrollment has continued under OneApp.

In fact, four years later, we now know that inequity is worse in New Orleans than it was before implementation of the common enrollment system, according to a Stanford University study.

In an email, Dr. Adamson told me, “The common enrollment approach is a major cornerstone of how schools end up selecting students (instead of the other way around). This usually occurs through a variety of loopholes (some schools maintaining neighborhood, sibling, or other preferential treatment), lack of equal access in the stratification by race and class in terms of access to higher performing schools.”

You can read the full report here.

Even a Walton funded report conceded problems. It quoted a parent as saying, “They make us believe that we actually have a choice and we’re involved in the process of picking our children’s school, but ultimately, if the computer didn’t pick your [lottery number], it doesn’t matter.”

Last year, when Oakland Unified School District was considering common enrollment, Dr. Adamson was joined in a panel discussion by Julian Vasquez Heilig, the head of Cal-State Sacramento’s education leadership PhD program. He also chairs the education committee of the NAACP of California and is a board member of the pro-public school Network for Public Education co-founded by Diane Ravitch. His blog is called Cloaking Inequity.

Dr. Vasquez Heilig said, “We know a lot about what happens with common enrollment from New Orleans.”

“OneApp is disingenuous because there are alternative pathways,” into the higher performing schools, he said.

He summed up the lessons learned in New Orleans this way: “They’re last or nearly last in every single education indicator.”

The research on New Orleans provides extensive evidence about the consequences of unified enrollment. LAUSD officials should do their homework before implementing such a system in the second largest school district in the country.

Concerned about LAUSD's Universal Enrollment? E-mail, call or write your school board member:

(Karen Wolfe is a public school parent, the Executive Director of PS Connect and an occasional contributor to CityWatch.) Edited for CityWatch by Linda Abrams.