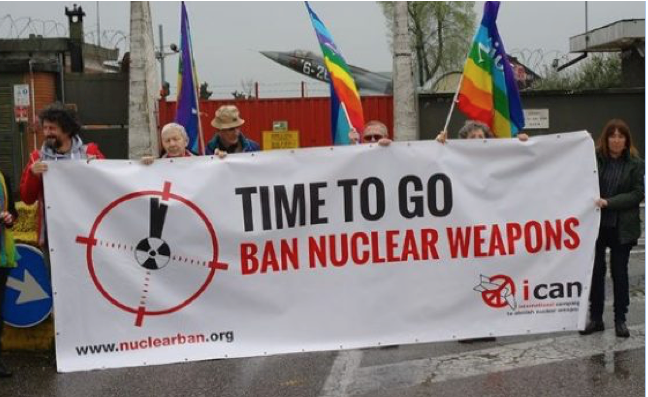 TAX DAY: THE NUCLEAR OPTION-"Don't tell me what you value. Show me your budget and I'll tell you what you value," said former Vice President Joe Biden, quoting his father. He knew that a budget reflected the values and priorities of our nation. Each April our country funds its priorities. Ultimately, as the Rev. Jim Wallis has said, "Budgets are moral documents."

Each year Physicians for Social Responsibility Los Angeles calculates how much money the United States spends on nuclear weapons programs for the current tax year. The Nuclear Weapons Community Costs Project has identified that for tax year 2016 the United States spent $57.6 billion on nuclear weapons programs. California contributed more than $7 billion to this amount while Los Angeles County sent approximately $1.8 billion to the federal coffers to fund weapons that can never be used. In Flint, Michigan, where we have allowed our children to be poisoned by lead in their drinking water, $9 million was spent. In the nation’s poorest county, Buffalo County, South Dakota, they spent more than $142,000 on nuclear weapons.

Every dollar spent on nuclear weapons is a dollar taken from programs that support the health and well being of our country, our communities, and our loved ones. These are critical funds that we can never get back.

The Trump administration is proposing a dramatic increase in the budget for nuclear weapons while simultaneously proposing a dramatic decrease for social and environmental programs. This is in addition to the nuclear grand bargain of the Obama administration's proposed buildup of our nuclear arsenal to the tune of $1 trillion over the next three decades. This is the opening salvo as other countries follow suit in this new nuclear arms race.

Having grown weary of our actions and failure to meet our legally binding commitment to work in good faith toward the abolition of nuclear weapons, the non-nuclear nations are refusing to be held hostage by the nuclear states any longer. Taking their future into their own hands the vast majority of the non-nuclear nations will complete negotiations at the United Nations this July on an international nuclear ban treaty that will outlaw nuclear weapons just as all other weapons of mass destruction have been banned. This will leave the United States and other nuclear nations once again in breach of international law.

Fortunately, a world under constant threat of nuclear apocalypse either by intent or accident is not the future that has to be. But change will not happen on its own. Each of us has a role to play. Ultimately it will take the people of the United States to awaken from our trance and join the rest of the world in demanding that our leaders work to abolish nuclear weapons and to redirect these expenditures to secure a future for our children and address the real needs of our country.

The time for action is now.

(Robert Dodge is a family physician practicing full time in Ventura, California. He serves on the board of Physicians for Social Responsibility Los Angeles serving as a Peace and Security Ambassador and at the national level where he sits on the security committee. He also serves on the board of the Nuclear Age Peace Foundation and Citizens for Peaceful Resolutions. He writes for PeaceVoice. This piece appeared most recently in CommonDreams.org.)  Prepped for City Watch by Linda Abrams.