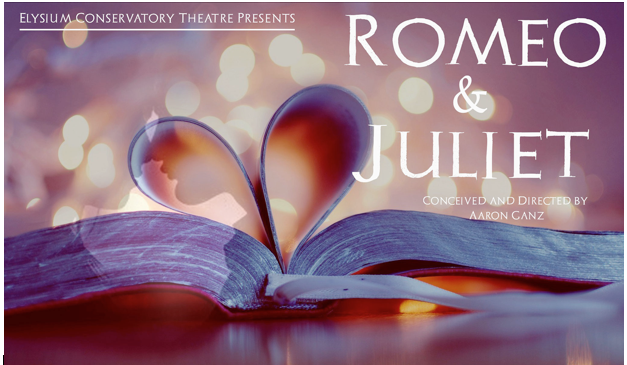 GELFAND’S WORLD--Everyone remembers how Romeo and Juliet ends. But suppose that by the final scene you know Juliet well enough to really care so that you are deeply bothered by her death. That's what the Elysium Conservatory Theatre is trying to accomplish in its new production of Romeo and Juliet. To a considerable extent, they succeed. Director Aaron Ganz and leading lady Ria Gaudioso have developed a Juliet who is a lot more than the traditional rendering of a sweet but rather passive girl who falls (note the verb) in love with her Romeo. The ECT takes another tack.

This Juliet is young and, as we know, subject to a stifling family system. But when she sees Romeo, she knows what she wants. She explains to Romeo that he is to take her seriously or not at all.

This stronger version of Juliet is present -- has always been present -- in Shakespeare's lines, particularly in the famous balcony scene. It's merely a matter of diction and intonation whether Juliet is personified as the more medieval lady or the vigorous spirit of a more modern age. The personality of the character is communicated through how the lines are spoken, and this Juliet speaks to Romeo as one equal to another. She understands that he will officially be her lord and master when they are wed, but there is a strong tone of emotional equality on her part. 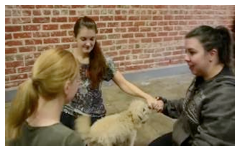 It's not uncommon for theatre companies to try to be novel by staging an old play in a modern setting, say Peleus et Melisande on the Malibu beachfront. Audiences don't generally care much, one way or the other, as long as the director doesn't mess with the music or the words. But ECT goes the other way 'round, staging Romeo and Juliet in traditional costume and devoid of extraneous settings, but letting the characters explore more modern themes even as they go through the old sturm und drang.

It's a matter of how the lines are spoken. To the more modern Juliet, the following is less dreamy-eyed singsong than serious warning and serious offer:

If that thy bent of love be honorable,

By one that I'll procure to come to thee,

Where and what time thou wilt perform the rite;

And all my fortunes at thy foot I'll lay,

Romeo is played athletically and engagingly by Gerard Alvarez, who hails from Gloucestershire in England and studied in Bristol and London. Interestingly, he alone among the cast members speaks with any kind of noticeable British accent. After a while, the audience fails to notice.

This performance carries on an ECT tradition of mixing operatic and balletic elements with the more traditional spoken theatre. The cast functions as characters and chorus alternatively. Melissa Ortiz does Shakespeare's narrative recitations and, in addition, musical numbers which support the dramatic intention, although these modern songs are not present in the original Shakespearean text. As to her performance, If writers still used the term dulcet tones, that's the description I would use.

Another point: As director Ganz explained, there are a couple of characters who are usually left dangling in typical productions. You might say that they are present merely to be disliked and to provide plot points. Tybalt usually functions mainly to be killed by Romeo, thereby causing Romeo to be exiled by the authorities. Paris usually functions merely as the parentally chosen suitor that Juliet abhors, and as such is the instrumentality by which Juliet is rejected by her own parents.

This production gives Paris (played by Christopher Lyons) a little scene of his own. In the moment of Juliet's agony -- when she has to deal with the fact that her secret husband Romeo has been exiled from Verona -- Paris is brought in to woo her. The ECT production gives Paris a musical number at this point. He breaks into "Wise men say, only fools rush in" but not as Elvis, just as a man in love, singing a song. Paris goes on with, "But I can't help, falling in love with you" and so on. The actress playing Juliet has to play the part of a young girl who is repulsed, but is trying to camouflage her true feelings. This scene, for all its oddity, actually works as intended. It is a different, deeper Juliet who emerges -- Paris finishes his number with a flourish, and Juliet is left to be talked into the subplot that leads accidentally to Romeo's death and her own suicide.

Charlotte Spangler ably stays in character as Juliet's nurse, being at times a devoted nag and at other times the personification of sorrow, all in all a compelling performance. Neyssan Falahi is originally French-Swiss, and has the sort of tall, muscular looks that should be worth tv parts, combined with the ability to put on a swaggering air. As Mercutio, he gets one of the best known lines in the history of theatre, "A plague on both your houses," as he realizes that he is dying from a sword wound after one of the senseless street battles that the Montagues and Capulets love to start. This being Shakespeare, that curse becomes prophecy, as audiences have learned for the past four hundred years.

Newcomers include Rob Miller as Friar Laurence, Giulia Blandino as Gregory, and Christina Gardner as Lady Capulet. ECT has rewritten the Tybalt character as female, played with aggression and speed of foot by Kate Slinger. She seems to get a kick out of playing the role, but transposing a Shakespearean swordsman who picks street fights into a female role seems to conflict with the theme of patriarchy as it ensnares Juliet. Other newcomers include Francesca Gomez, Will August, Justin Powell, Brian Raetz, and Tim Roberts as Sampson, Montague, Capulet, Benvolio, and Peter respectively.

This production is the opening of ECT's new playhouse on South Palos Verdes Street in San Pedro. As you might expect for such a new theatre, there are some growing pains. The new playing surface is a cavernous rectangular space that still sports unadorned concrete floors and extended walls. As such, it suffers from a bit of reverberation that at some points obscured the dialog. I suspect that something as simple as positioning a few sound-absorbent flats during performances will get things under control.

At the same time, having a big room allows for big room performances. When Juliet's father bellowed his anger, you could feel it in a way that wouldn't have been possible in the previous space. ECT continues to carry on the immersive theater approach (as it did before) to some extent.

The new space seems less appropriate to that approach, and for whatever reason, there was less direct interaction with the audience compared to previous productions. At one point, however, cast members pulled audience members from their seats to join in a dance number. There's always something unexpected with this group.