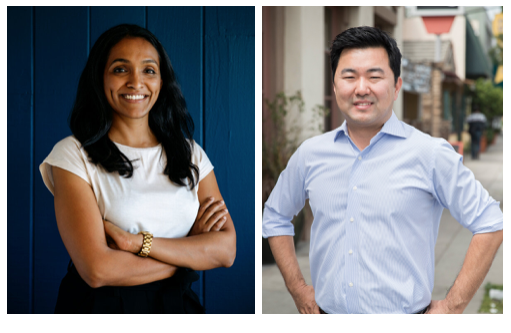 The Recall David Ryu movement began soon as he took office due to his opposition to the legitimate interests of the people who live and vote in Council District 4.

That recall was step one in a long term plan to rid City Hall of corruptionism.  Many of those who began the Ryu recall knew that the likelihood of a recall itself was not great, but the real objective was to prevent his re-election if he continued to follow Garcetti.  While Ryu was never as bad a Garcetti’s Mini-Me Mitchie O’Farrell, he sold out all of CD 4. His voting recorded showed that Ryu fully participated in LA’s deterioration and the burgeoning Homeless Crisis.

While former City Council member and County Supervisor Zev Yaroslavsky is probably Los Angeles’ most prescient political forecaster, he is wrong on why Raman won.  It was not that homeowners favor leftist Wokerism. The Recall Ryu Campaign had provided a sustained organizing vehicle for CD 4 voters dissatisfied with Ryu’s following Garcetti.  Had Ryu ignored to the pundits, he would have realized that the election was actually the Recall’s fruition.  He could not count on automatic re-election.

Step Two is Raman’s recall.  Back in 2015, it was predicted that if Ryu did not stop his subservience to Garcettism and he continued to participate in the criminal vote trading system, whoever replaced him would also need to be recalled.  This time, however, the recall needs to actually press for her early removal.

The Homeless Crisis was Manufactured

Ryu helped create the Homeless Crisis by his persistent support for the destruction of Rent Controlled Apartments (RSO units) so developer could build market rate projects.  This has been occurring large scale for well over a decade, but homeowners did not see the suffering of poor people nor did they give a damn.  Too many homeowners believed that people were homeless because they wanted to be or because they were lazy or they were drug addicts.  It’s part of the Calvinist Culture that GOD preordains certain people to be saved and the rest are damned.  Being wealthy is a sign that you were saved; homelessness is GOD’s will. Now that the homeless are living in the good folks’ neighborhoods and the parks, the good might wonder, “Why am I subjected to this bad stuff? Doesn’t GOD love me any more?”

Homelessness is caused by racist white people living in detached single family homes.  The LA Times, in contrast, seems to favor the theory that it’s laziness and drug addiction.  Whether it is Judge Woker, the LA Times or Nithya Raman, the solution is the same: destroy single family homes!

Sacramento is pushing bills to end the evils of single family homes by allowing a developer to buy any home, tear it down and put up a multi-unit apartment complex.  How will this reduce homelessness? It’ won’t.

Garcettism Has Turned LA Into a Nightmare

By destroying rent controlled apartments, tens of thousands of people were thrown onto the street.  The housing market is segmented by what people can afford.  Tearing down $500/month apartments and building a complex with $2,000 units leaves poor people no place except the streets.

No Rent Controlled Apartment is Ever For Rent

Most people do not realize that in LA there are no rent controlled apartments for rent. The moment an RSO unit is vacant, it become market rate. If the former tenant paid $750 and the landlord can get $1,500.00, that’s the new rent – not the old $750.  Over time, RSO units have restrictions limiting the amount of rent increase so that after several years, an RSO unit can benefit a low wage earner.

There has not been a huge jump in mental illness. Thus, mental illness cannot be causing the homelessness crisis.  What occurs is that when a person with mental disabilities loses his/her RSO unit, he/she often is unable to get organized to earn enough money for a market rate unit.  Meanwhile, others who have been made homeless can figure their way out of homelessness.  Over time the result is that an increasing percentage of the homeless have serious mental issues as they are the ones who become chronically homeless and increasingly hostile.  If every homeless person with mental illness were magically zapped away from LA, our annual increase in homeless would remain the same as long as we destroy RSO units.

Just because someone calls himself a businessman does not really mean he knows jack about how economic and social forces interact with any business. The Buy Low Sell High maxim is true, but it is more complicated that buying up RSO units since they are cheap.  Like a fish which snaps on a fancy lure, too many developers snapped up RSO units ignoring the fact that the buying public soon would not want expensive cramped apartments.  The Dorm Style life wears thin about the age 25 when the Single Millennials start to become Family Millennials.  The developers believed all the ballyhoo that Millennials would forever shun the American Dream of owning a detached home in favor dwelling in high rises where one haas to do down four flights to let the dog go pee rather than opening the door to the backyard The harbinger which developers should have heeded was that Millennials would buy homes just for their dogs years before starting a family.

Developers bought low and are stuck with a glut of empty housing. What’s worst than buying high and selling low? Buying low and not selling at all.

Then the Big Scam Came Crashing Down

Grade school math showed that luring developers by subsidies to replace low income housing via SB 1818 and other laws was nutzy-koo-koo.  They had this farkata idea that if they let developers ignore building codes and built too high, have deficient off street parking and no lot set backs, that the developers could make enough money from the market rate units to pay for the low rent units. They discovered that ignoring building codes to build dreck was not a smart selling point.  The new mixed-use projects remained empty; yet they built more while the exodus of Family Millennials accelerated.  Supply side can work if and only if one builds what people want.

The developers are stuck with a glut of apartments in bad neighborhoods with increasing crime often perpetrated by the same people whom the developers had thrown onto the streets to build the fancy-smancy units.

They’ve discovered that a single family home is cheaper to buy than an entire rent controlled apartment.   Buying R-1 homes in Windsor Square or Los Feliz allow the developer to buy into a low crime area.  Thus, they figure that they only need wipe out R-1 zoning and everything will be copacetic.  If you’re opposed, then you’re a racist.  They claim it is only equitable that we all atone for the sin of racism unless you’re a developer. Then it’s A-OK to make millions of dollars destroying single family neighborhoods.

In 1915, the city’s civil engineers proved  that densification in the Basin was a bad idea, but after the Community Redevelopment Agency was formed in 1948, Angelenos ignored the evils of densification.  As LA deteriorated under Garcetti’s Manhattanization, the city lied about how great it was growing.  Everyone ignored Judge Goodman in January 2014 when he said Garcetti was using f”atally flawed data” to the extent he subverted the law. The lies continue, saying Hollywood has grown to 206,000 residents and we must build for 264,000 ppl, when the population has fallen to 195,729 people from 198,228 in 2020

The attack on the single family home will utterly destroy the American Dream for Los Angeles, and Nithya Raman is one of the loudest of the ramble clamoring for our demise.

If they destroy R-1 zoning, housing prices will rise at first as developers will pay above market value of a family home.  Increased housig costs will price more Family Millennials out of LA.  Former R-1 areas with apartment complexes in their midst will be less desirable and prices will fall. Homeowners will demand downward assessment of property taxes and tax revenue will fall. City’s wall Street debit have zoomed upwards as it will have spent billions on subsidizing the affordable apartments and more unwanted mass transit.  As the developers go BK, the city will still have to pay off Wall Street for the affordable bonds and the mass transit construction and its increasing deficits.