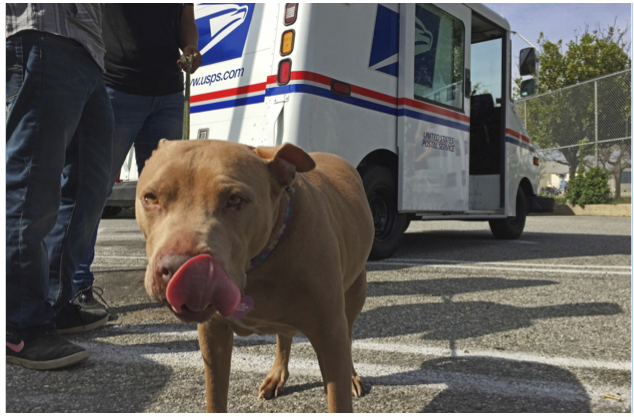 ANIMAL WATCH-On April 6, 2017, the U.S. Postal Service announced that dog bites to mail carriers in Los Angeles soared to #1 in the country in 2016, with a total of 80 attacks.

This was a 43% increase from 2015, when Postal workers in LA incurred only 56 total bites.

Looking back to 2011, GM Brenda Barnette’s first year at LA Animal Services, there were only 44 bites for the entire year, almost one-half of the current rate. Los Angeles is definitely catapulting in the wrong direction.

This is not only a danger to the public, but also to LAAS Animal Control Officers who suffer serious bites and risk other injuries attempting to avoid attacks. In 2015, Director of Field Operations Mark Salazar announced at a Harbor Neighborhood Council meeting that workers' compensation claims for LAAS had risen 350%.

Reports of loose dogs (categorized as "dogs-at-large") -- owned or strays -- need to be addressed when complaints are received by the department and before the first bite occurs, in order to keep residents and service employees (including mail and package delivery) safe. The primary function for which municipal animal control agencies were established under State law was to insure the impounding of stray (loose) dogs for public health and safety. This was prompted by rabies epidemics.

Dogs are territorial and, when allowed to roam streets and neighborhoods, their "territory" is expanded. If the dog is aggressive by nature and, especially if it is also an unaltered male, it is statistically far more likely to pose a serious threat to the community.

However, "Dogs-at-large" (running loose or escaped from yards) are No. 18 on the priority list authorized by Brenda Barnette for her field officers.

Although animal attacks are a #2 priority, officers state that they are so busy that they rarely arrive at a dog-bite scene before the victim has been assisted by LA Fire Department and/or transported for medical care. They also confirm that attacks happen almost daily in Los Angeles, including the maiming or killing of someone's beloved pet.

According to Assistant GM Dana Brown, there are still only 50 Animal Control Officers working 24/7 from six shelters to serve 469 square miles with almost 4 million residents and their pets. Eight officers are on long-term leave or restrictions and 25 positions are vacant. She explained at the April 11 Commission meeting, that they had only been able to start four new ACO's during the past two years because of a “glitch” in the hiring process.

Adding to this is the failure to replace the 2001-2003 fleet of dangerously malfunctioning animal control trucks that the city's fleet manager told Councilman Paul Koretz publicly in 2015 were already "falling apart." Assistant GM Brown admitted at the meeting that there had been "miscommunication" in the ordering of the 17 new trucks authorized. She added that now the department is facing budget cuts and the extra funding to correct the errors in the functional design might not be available.

GM Brenda Barnette admits she does not keep stats on dog bites/attacks in the city. There is widespread speculation that this is to evade revealing the actual frequency and severity. It could also be a tactic to avoid filling LA’s shelters with aggressive dogs that might need to be euthanized and, thus, destroy the myth of the “No Kill” city.

This is very disturbing not only because LA stakeholders paid over $44 million in taxes, and $230,000 for the GM's salary in 2016, but also because victims of attacks or those who are threatened by menacing dogs have nowhere else to turn for help except LAAS.

Equally if not more alarming is that no one in City government seems to care.

On April 11, five days after the widely publicized USPS report, the Board of Animal Services Commissioners met. This is a Board of five volunteer residents appointed by the Mayor and designated by the City Charter as head of the Los Angeles Animal Services Department, with the General Manager setting policy.

Not one of the Mayor's appointees mentioned the upsurge or dangers of increased dog bites -- not even to request it as a future agenda item.

The Commission, GM Barnette and a room populated with representatives from various city departments, including the offices of the Mayor and City Attorney, were there to discuss feral cats and a proposed city-funded TNR (Trap/Neuter/Release) program to allow free-roaming, unowned, unsocialized cats to be released into neighborhoods citywide.

This plan hinges on the successful results of Mayor Eric Garcetti’s tax-funded $800,000 Environmental Impact Report (EIR) by the City’s Bureau of Engineering, which they hope will show that a Trap/Neuter/Release (TNR) program that results in tons of cat feces and urine excreted on streets and yards of residential areas; the spread of parasites and diseases such as toxoplasmosis; and rampant destruction of birds and other small mammals by colonized cats all over the city will not have a negative impact on communities.

WHY USPS “DOG-BITE” STATS ARE IMPORTANT

The USPS annual dog-bite statistics during “Dog Bite Prevention Week" are headlined in media reports and TV news across the country as a significant indicator of neighborhood safety.

Any increase should be regarded as warning of a deficit in enforcement and/or effectiveness of the officials in charge of animal control, along with the elected or appointed representatives who seek positions with the responsibility for guarding the public’s interest and welfare.

Expecting government officials and agencies to be concerned about injuries inflicted by dogs, which can be as damaging as those incurred during robberies or gunshots or car accidents, is not asking for a special favor.

The lack of reaction by GM Brenda Barnette and the entire political hierarchy of Los Angeles to the USPS alarming report of increasing dog-bites -- while they focus on releasing feral cats into communities with no regard for homeowners' opinions, or impact on quality of life, or public health and safety -- is just another indicator of Los Angeles' lack of leadership and systemic disconnect with reality.

The feral cat issue was fast-tracked to the Personnel and Animal Welfare Committee for discussion and further approval on Tuesday, April 19, with no discussion of the USPS dog-bite report on the agenda.