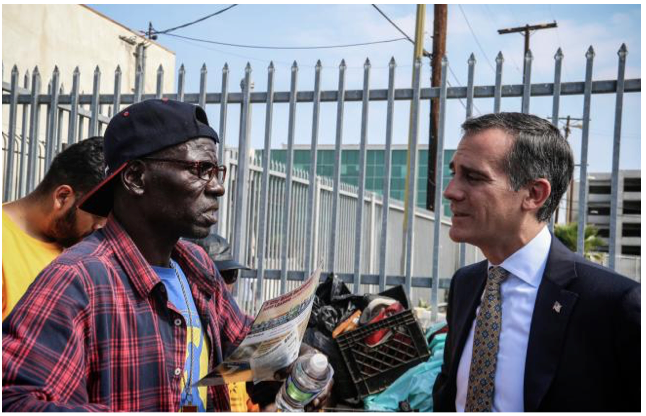 MCDONALD REPORT--In the nation’s second largest city, Los Angeles Mayor Eric Garcetti and the City Council have quietly perverted a much-needed housing program for homeless men, women, and children. And affordable housing advocates and the Los Angeles Times are not sounding the alarm. (Photo above: Mayor photo-oping with the homeless.)

Los Angeles is currently facing one of its worst homeless crises in recent memory. It’s so bad, the Times reported, that LA has the highest number of unsheltered homeless people in the entire United States.

As a 2013 mayoral candidate, Garcetti told an audience of affordable housing advocates that he would end homelessness. Now, in 2017, he essentially backed off that campaign promise, saying that homelessness was a “long-term crisis” that needed “long-term solutions.”

One of those solutions was a $1.2 billion bond initiative to build homeless housing, known as Measure HHH. Voters overwhelming approved it in November 2016.

Another was a kind of pilot project for Measure HHH, known as the Affordable Housing Opportunity Sites (AHOS) program. It will utilize several city-owned properties on the Westside and in Lincoln Heights and South L.A., among other locations, to build more housing.

The LA Times has described AHOS as a program that will build “permanent supportive housing,” which specifically caters to the homeless and provides important services.

The paper also reported that Garcetti and the City Council “spent months developing plans for converting as many as 12 city-owned sites [through the AHOS program] into housing for the city’s homeless residents.”

To get LA’s liberal voters to vote down Measure S, Garcetti and council members repeatedly said the initiative would stop the city from building homeless housing through the AHOS program.

In a January interview on the local ABC TV affiliate, for example, Garcetti said that “nine out of the 10 (AHOS) properties, the city’s going to build housing for the homeless on, couldn’t be built if Measure S gets passed.”

City Hall politicians regularly linked the AHOS program to homeless housing — and to Measure HHH, which voters expect Garcetti and the City Council to use for homeless housing, not something else.

But only weeks after Measure HHH was approved on November 8, the betrayal of the homeless — and LA voters — was well underway at the hands of Garcetti, the City Council, and the City Administrative Officer.

In December 2016, the City Council approved the final details of the AHOS program, which was organized by the City Administrative Officer with much input from the City Council and mayor. It had turned into something startlingly different from what City Hall politicians had been promising — and what the LA Times had been describing.

The City Administrative Officer also recommended that it enter into negotiations with developers who have proposed a “mix of supportive, affordable, and market-rate units.” Again, the City Council approved.

On December 7, 2016, at the City Council’s Homeless and Poverty Committee, Yolanda Chavez, a top official with the City Administrative Officer, revealed another disturbing fact.

Chavez talked as if everything was perfectly okay. Councilman Marqueece Harris-Dawson, chair of the homeless and poverty committee, said nothing. Affordable housing advocates, who were present, also kept mum.

Instead, advocates had only good things to say about the AHOS program — perhaps because they wanted city contracts to build AHOS projects.

The LA Times was unconcerned, casually reporting that the “city initially planned to offer the [AHOS] sites for supportive housing, which would include on-site services. But the recommendation released Thursday said proposals could include affordable housing, mixed-income housing, market-rate housing and occupant-owned housing as well.”

The fact that a homeless housing program, which Garcetti and City Council members touted as a vital first step to address LA’s homeless crisis, could now build market-rate housing did not alarm the LA Times in the least.

All this is happening in a city run by liberal Democrats (Garcetti and Wesson included) in what’s considered to be one of the top progressive bastions in the U.S. — with the left-leaning LA Times supervising.

Today, Angelenos remain largely uninformed about the specifics of the AHOS program. LA politicians quietly, and hurriedly, pushed it through; the LA Times never raised an eyebrow; and affordable housing advocates took a powder.

City officials are currently sorting through the proposals for projects that will make up the AHOS program. With complete certainty, permanent supportive housing will not be built at every city-owned property — five sites in Lincoln Heights, which is represented by Councilman Gil Cedillo, have already been designated for “mixed-income” housing.

As a result, the city’s use of Measure HHH money for the AHOS program will not go entirely to homeless housing, and homeless men, women, and children will not receive the full amount of housing and services that Mayor Eric Garcetti and the City Council had promised.

Instead, an affluent professional, the only person who can afford market-rate housing in L.A., may land a nice pad on city-owned property in increasingly gentrified Lincoln Heights or near the beach on the Westside. It’s the very definition of a scandal.

(Patrick Range McDonald, an award-winning investigative journalist, worked on the Measure S campaign as senior researcher and website editor. This perspective was posted most recently at washataw.com.)