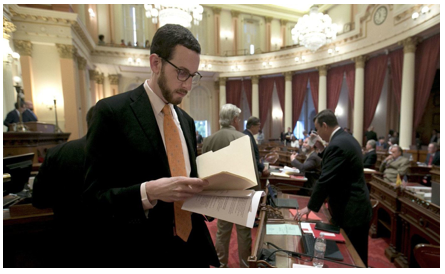 DEEGAN ON LA-Mansionization could be seen as kid’s stuff by some, compared to what’s being proposed in Sacramento -- in SB827 -- that’s being called a “transit-rich housing bonus bill.”

In it, newly-minted State Senator and bill author, Scott Wiener (SD11) of San Francisco, is calling for a menu of exemptions for developers that build within a 1/2 mile radius of a major transit stop, or a 1/4 mile radius of a high-quality transit corridor.

If your single-family home or duplex is up to a half-mile away from a transit corridor or hub, this could mean looking out your window at an intrusively high building -- up to 85 feet (approximately eight floors) – blocking your view of everything and contributing to the destruction of the character of your neighborhood.

The draconian element of Wiener’s proposed legislation is that he wants the law to apply to all California cities. He says that charter cities, like Los Angeles, cannot be excluded from his proposed state law. However, a charter city like ours may be able to declare the sovereignty that its charter status guarantees and refuse to implement the bill, if ever passed.

Being a charter city, as approved by Los Angeles voters in 1924, allows voters to determine how their city government is organized and, with respect to municipal affairs, enact legislation different than what is adopted by the state. This gives charter cities the supreme authority in municipal affairs, including land use, that will trump a state law governing the same topic.

Wiener’s office declined to comment when asked by CityWatch, “What mayors have been consulted about this proposal, and what were their reactions about this proposal for their cities?” If Senator Wiener had shared his plans with any of California’s big city mayors and asked for feedback, there’s no trace of any of them speaking out publicly.

For communities, this bill could be more of a nightmare than mansionization was. The provisions that would affect our city could include giving developers a “transit-rich housing bonus” in what the State Legislative Analyst calls a housing “opportunity bonus.”

Wiener’s bill would authorize a “transit-rich housing project,” defined as a residential development project -- the parcels of which are all within a 1/2 mile radius of a major transit stop or a 1/4 mile radius of a high-quality transit corridor -- to receive a “transit-rich housing bonus” in which a project awarded a “housing opportunity bonus” would be exempt from various requirements. These would include exemptions for:

The proposed bill has a long way to go before being signed by the Governor -- possibly the new governor who will be elected in November, if the bill isn’t killed or compromised before that.

Who is State Senator Wiener?

A local paper recently ran a profile on this former San Francisco County Supervisor (San Francisco’s equivalent of a city councilmember) who was elected in November 2016:

Enacting a new law is a long process, and this one is just at the beginning stage. Introduced on January 3, 2018, it was referred to the Legislature’s Transportation and Housing, and Governance and Finance committees on January 16.

You can contact your state representative to let them know you have an interest, pro or con, in SB827.

(Tim Deegan, is a civic activist whose DEEGAN ON LA weekly column about city planning, new urbanism, the environment, and the homeless appears in CityWatch. Tim can be reached at timdeegan2015@gmail.com.) Edited for CityWatch by Linda Abrams.