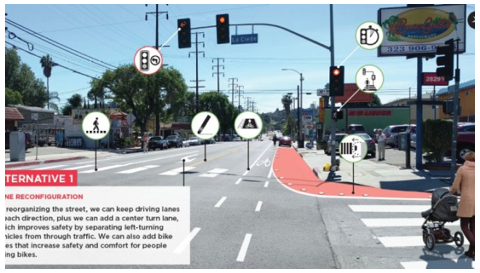 ALPERN AT LARGE--Vision Zero (and, to a very large degree, Great Streets) are first-rate, meritorious efforts that have the ability to improve and save lives.  There is no reason why every neighborhood council and city council throughout the nation and world shouldn't adopt part or all of those initiatives.

Which is why the Mar Vista Community Council (MVCC) fought for years to do just that--come up with designs and beautification plans for a stretch of Venice Blvd labeled as Downtown Mar Vista (Venice Blvd between Inglewood and Centinela). 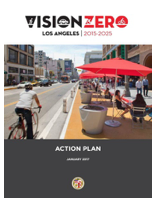 It was NOT hard at all to convince my neighbors and peers, who had their own courageous and spirited efforts, to fight for ways to encourage traffic control, make businesses more attractive and accessible, and to pay for both sidewalk and median beautification...as well as work with the CD11 office to repave and fix up the critical alleyway accessing the Farmers Market in Downtown Mar Vista.

Fifteen years of blood, sweat, tears, discussion, and time from our families came to a crashing halt when a sudden reconfiguration of Venice Blvd occurred--ostensibly to save the lives of bicyclists, but which has created blind turns and a lack of visibility that has forced more than a few bicyclists to avoid those protected lanes.

The response when that issue is raised?  SHUT UP--you don't care about the lives of bicyclists.

I guess it doesn't matter that a critical bicycle plan that encourages more protected bike paths and lanes throughout the Westside, and linking to Mar Vista, has been developed by bicyclist Ken Marek and other bicyclists and community organizers to come up with a safer, and better, plan than what currently exists...because the MVCC and its leaders ALWAYS wanted safety for bicyclists.

And the response when we demand that those trained in laws related to the Americans with Disabilities Act (ADA) be included in revisiting crosswalks created with Venice Blvd. reconfiguration in Downtown Mar Vista?

The response is, of course, to SHUT UP--you don't know what you're talking about, everything is better, we're looking into it, and you probably never cared about pedestrians, anyway.

And the response when alternative courses of action are suggested to reduce speeds and promote safety on Venice Blvd. (you know, after fifteen years of discussing and looking into just that, and after repeatedly REJECTING the bike/bus-only lane idea)?

SHUT UP--Venice Blvd. isn't supposed to be a speedway.  It's a place to go to, not just a place to drive through (which, of course, is an expression that the MVCC and its community organizers originally coined, and one which we THOUGHT we were on our way to fixing that problem).

Vision Zero is, at its heart, a great idea for new urban beautification/safety efforts for the 21st Century.

We don't need mean streets, we need green streets--but with safety for all parties, and not one which turns regions and neighboring residential streets into cut-through traffic nightmares, and which threatens the viability of local businesses.

That Mayor Eric Garcetti and LADOT "Vision Zero" guru Nat Gale are nowhere to be found after ramming this down Mar Vista's (and, recently, Playa Del Rey's) collective throat is just dreadful.

That Councilmember Mike Bonin now faces a recall and the once-united community of Mar Vista has been divided as "density warriors", stooges for rich/removed overdevelopers, and zealots who have little to do with representing the needs of everyday/majority bicyclists and pedestrians take over the region is just as dreadful.

From the CD11 office on down, we've been split and divided by those who have HIJACKED an otherwise praiseworthy Vision Zero concept into some very misguided efforts.

Let's bring back the "vision" into Vision Zero.

Let's stop conflating bad reconfiguration efforts, and efforts slammed through with very little warning and with lots of Orwellian misrepresentations of the reality occurring on Venice Blvd., into something that has to be promoted as "pro-safety" or "pro-bicyclist" or "pro-saving lives" when nothing could be farther than the truth.

And let's STOP those who have hijacked Vision Zero for their personal gain or ego trip into something that has unfairly and cruelly split the community.  Mayor Garcetti might be our mayor, but Nat Gale of the LADOT is not...and Nat Gale doesn't have the right to hurt the community and split us the way he has.

I urge all parties to step back, realize we all have very similar goals (with the exception of a very agenda-driven few), and focus on what we were doing for fifteen years before Mayor Garcetti and Nat Gale shoved Mike Bonin and Mar Vista into traffic and put us into the untenable situation and circumstances for which we are all now suffering.