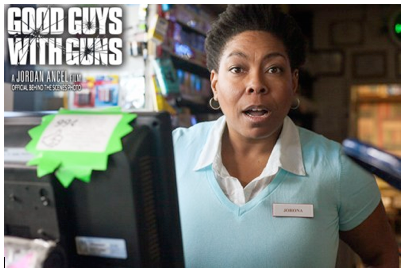 GELFAND’S WORLD--We've now completed the first weekend of the San Pedro International Film Festival, aka Spiff.  The fun part of a film festival, certainly this one, is the chance to see a lot of short films -- both documentaries and fictions -- by young and unknown artists. The abundance of decent quality short films raises an interesting question: In the absence of a movie theater circuit that shows these films, how does a mass audience experience them? It turns out that there are a couple of answers to this question, neither of them being entirely satisfying. There are a lot of well-made stories that deserve to be seen on the big screen by a live audience.

Spiff ran the short fiction Good Guys With Guns on opening night. Suppose there's a robbery in a convenience store and everybody else in the store and in the parking lot is packing a handgun and starts shooting at something or somebody. Filmmaker Jordan Ancel tries to answer this question in an ultrashort film that is wry but noir. NRA types won't like this one.

In another wry but angry fiction, Save Our Snowmen contemplates a world in which all the different Frosties are deserting their posts and heading north to a snowman sanctuary in order to escape the increasing levels of warmth which are taking over the places they once were. It's a satirical take on the reality of global warming.

I should interrupt this travelogue to point out something. In the old days, short works were shot on film (as opposed to modern video technology) and a lot of documentaries showed the deleterious effects of using cheaper formats such as 16 mm and even Super 8 film. A lot of documentary filmmakers skipped the use of the more expensive color film and limited what they did to black and white.

This generation has access to inexpensive but high quality digital video, which competes reasonably well with the high quality color film that was used by major studios in the old days. In recent years, filmmakers have been mentioning shooting on a camera built by Red (yes, that's the name of the company). A couple of filmmakers I spoke to this year mentioned shooting on a Sony A7S, which is basically the size of any other hand held digital camera. The result is a fully high definition image which is not quite up to the Red standard, but still looks pretty good even on the 51 foot wide screen at the Warner Grand Theatre.

Another film about the disaster of global warming is the documentary Joshua Tree: Threatened Wonderland. You can now see it on Vimeo, which provides one of the answers to our original question about what to do with all these short films.

Chee Wei Tay was doing a corporate film shoot in Texas when he had a day off. As he explained, the choice was either to laze in the hotel or go shoot some footage. He spent the day documenting an animal sanctuary that rescued a pair of turkeys. You can catch some of his work on the internet including The Rescue.

Chapman University has a film school that has been sending its students to Africa to do documentaries as part of their education. Haven documents an orphanage in Malawi, a country with a heavy mortality from HIV and the resultant orphan population of about half a million. Gabriella Pinel spoke of her experience in working on this film. The crew spent most of a week on site interviewing the students and teachers, then returned home to work on editing the more than 100 hours of footage into the 15 minute documentary. It was interesting to hear one of the students explain that he would like to become a civil engineer. You don't hear that very often, even in the United States.

Haven, like so many other documentaries, carries an underlying message that all of those people in far off countries that we don't think about are human too. The direct message to the viewer is to empathize. There is an additional value in such documentaries because they record the historical reality of people who are not generals or making speeches at the United Nations.

Homecoming, the work of Roxanne Messina Captor, introduces us to women who have served in the American military. It is a sympathetic look at women who define themselves as warriors, who spend time away from their families, and who (too often) come home physically wounded or with PTSD. The filmmaker would like to expand this into a feature length documentary. As she explained, every one of the people she showed represents a story to be told. This film may produce mixed feelings among the Viet Nam era generation, but the likeability of its subjects is not in question.

What should we do with all these quality short films? There is the internet, but that isn't the big screen. In conversation, the filmmakers pointed out that there is a film festival circuit, and they can apply for their films to be seen. That doesn't seem entirely acceptable either. I would like to see (as the next technological marvel) the chance to see these films the way they are meant to be seen. Perhaps virtual reality technology will provide the answer.

Dreams I Never Had is an unexpected luxury, that jewel in the rough that you hope to stumble across. It has as its subject matter the exploitation of a middle eastern girl who has been contracted by her parents to work as a servant in an American home. In this case, the Americans are themselves immigrants from the same country. These parents are trying to raise their own children within their own culture while meanwhile expecting them to compete academically in their upscale school in a wealthy California suburb. That leaves the girl Layla, who has been brought into the United States (somewhat fraudulently it turns out) by the mother. Layla was, for all intents and purposes, purchased from her parents to work more as a slave or indentured servant than as a member of the American family. She is abused and exploited by the two offspring and by the mother. She is also denied the chance to go to school.

What was interesting about this film is the way the storyline is structured and, in keeping with that storyline, what is omitted.

We can summarize the temporal sequence fairly simply: Layla is brought into the U.S. at the age of 12 or 13. Over the next five or six years, she works in the family home but is not permitted to leave (at least not often), develops a school girl crush on an equally young undocumented boy who works as a gardener, gets raped by the son and threatened by the daughter, runs off with the boyfriend to escape her abusers, gets caught in an INS raid, and becomes a free and legalized American.

You might notice that there is a big gap in the storyline. Just what occurred to her after her capture by the INS that led to her legal status? That's just one of several such omissions. To my mind, these omissions add to the film rather than detract.

At one time, experimental filmmakers loved playing around with something called the jump cut. They would simply omit part of a sequence -- one moment the main character is walking down the street and then, instantaneously, he is somewhere else. After a while, audiences figured out that this was just a way of skipping extraneous movements.

In Dreams I Never Had, the filmmaker is doing the equivalent of jump cutting, but in this case by omitting extraneous plot elements instead of routine movement. Time is also rearranged a bit, as the film begins on a flash-forward to a criminal trial -- the mother is being tried for illegally importing Layla and for holding her against her will.

Thus the director and film editor have signaled from the very beginning that there is some sort of happy ending -- or at least a tolerable ending -- in that the criminal acts will be called out in a court of law. This tactic compresses and bends the story arc substantially, since the audience gets to avoid the slow establishment of the idea that the law will eventually catch up with the parents. This film avoids the cops and robbers part of the story entirely. We know from the beginning that the police and prosecutor will get to the right place, and that's all we need to know.

That's a lot for an opening scene to establish, but it works. At this point, the film jumps back to the beginning of the story. The family is at home and their servant girl is doing their bidding.

The film goes back and forth between the trial and Layla's everyday life and eventually to a few moments when Layla begins to become aware of what American life could be for her if she could escape her imprisonment.

Let's consider some plot elements that have been left out. In a more expensive version of this kind of film, we would be introduced to some sympathetic law enforcement officer who would gradually track down the existence of the servant girl and ultimately bring the miscreants to justice. Likewise, the girl's life following being captured by the INS is simply omitted. We understand that they have initially misidentified her as an illegal from south of the border, but we don't know much else because the story jumps. The director and film editor handle this with a simple title shot explaining that it is now three years later. It is a brave move on the part of the story tellers to skip shooting a series of scenes in which Layla is freed and rehabilitated.

I'm going to hazard a guess here. These plot elements were probably omitted because they could be left out -- likely for financial reasons -- without losing the main theme of Layla's story. The film's message is human redemption through patience, struggle, and love. To extend the storyline to all the ancillary elements would have added to the cost and length of the finished product without adding to the exploration of the main characters.

This film shows the virtue of sticking to the point, a virtue presumably motivated by the necessity of staying on budget. Routine plot elements that by now have become cliches have been left out.

What was left was the human element. Newcomer Fidelia Grace as the servant girl stands out through her convincing and well controlled performance. Iyad Hajjaj not only directed the film but also played the father sympathetically. Golsa Sarabi played the domineering mother in a characterization that doesn't have a lot of nuance but managed to portray a manipulative woman who is trying to be a good mother to her own children while being entirely insensitive to Layla's humanity -- a Lady MacBeth without the charm, effectively portrayed.

Malcolm McDowell and Robin Givens are the name performers as the judge and prosecutor respectively. Either could have been replaced with some other actor, but they look good on the poster. There are a few uses of artistic license (since when does a prosecutor in a criminal trial get to call the defendant as a witness against herself?) but they don't do a lot of harm.

The lesson of this first weekend of the film festival is that there are a lot of moving, quality films -- both shorts and feature length -- that deserve being shown on the big screen.