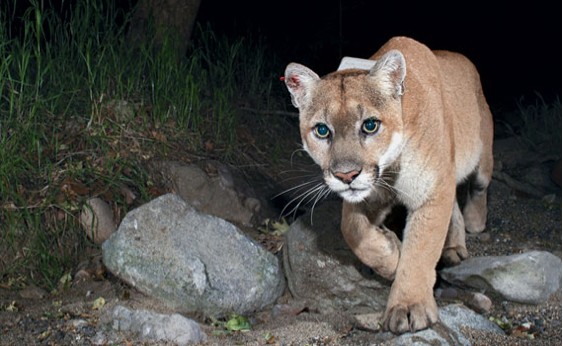 DEEGAN ON LA-Move over Magic. Step aside CT3. Bono, go to the back of the room. All you one-name celebrities -- meet your match and more: P-22, LA's iconic Puma (also known as a Mountain Lion or Cougar), a popular “extreme survivor” who lives in the Griffith Park hills. He’s even been honored with his own official day by a Mayoral and City Council Decree -- October 22 is P-22 Day in LA.

Like any high-profile Hollywood star, he has his own movie, “The Cat That Changed America.”

His wardrobe is sparse but chic: a GPS radio-collar that he has worn since 2012, tracking him throughout the day and night, so we’ve got a pretty good idea of where he hangs out and how restricted his turf really is. In the past 15 years, National Park Service biologists have tracked 50 local mountain lions to understand where and how they live -- or die -- which leads to the need for “Wilderness Crossings” for P-22 and other wildlife creatures like him. These crossings can make it possible for isolated mountain lion populations to reconnect, possibly saving them from extinction.

Why is P-22 LA’s coolest cat? "His story does a good job at summarizing various conservation issues facing our local predators and native wildlife. He's had to survive many urban dangers that have each individually killed a great deal of pumas and other local wildlife species,” explains Miguel Ordeñana, Citizen Science Coordinator and Wildlife Biologist at the Natural History Museum. He adds, P-22 is “living in a world-renowned area. His story touches all the cool landmarks in Los Angeles such as the 405, the 101, the LA Zoo and Griffith Park itself which is home to the famous Hollywood sign and the Observatory, all very relatable to people.”

Another dimension to his celebrity status is his ancestry that reaches back to the pre-ice age era, pretty remarkable when “old” in Los Angeles is generally measured in decades. Beth Pratt-Bergstrom, California Regional Executive Director of the National Wildlife Federation, explains, “P-22 is a symbol [dating back to] the ice age, roaming Griffith Park with a symbol of our time: the Hollywood sign. He eats deer that graze on lawns on the Forest Lawn cemetery where celebrities are buried -- not your usual habitat for a mountain lion. He's a very wild and ancient animal within our modern world. A juxtaposition you don't normally see. This is why people respond to P-22. He captures the imagination.”

Like many celebrities, P-22 was “discovered,” not in the traditional way aspiring actors get noticed, but by stealth, caught by a remote camera as he wandered through Griffith Park five years ago. The Griffith Park Connectivity Study  had installed cameras in the park to learn how mammals move about the park. P-22’s image was captured and a star was born as his story of survival became known by tracking his movements.

Griffith Park is just one of the wilderness areas offering creatures like P-22 the same essentials that humans need: food, shelter, and a good mate. There are many more habitats in the Santa Monica Mountains, but navigation to and through them is a challenge due to infill in the mountains, including road systems, housing, and ultimately, the toughest barriers to surmount, the major freeways like the 101 and the 405. Linking these habitats is a challenge to man and mammal alike. Hence, the need for “wildlife crossings.”

Man’s newest contribution to our wildlife’s mobility challenge is building a wilderness bridge -- a planned crossing over the ten-lane Ventura Freeway, a project that should be completed by 2022. It will likely be the largest such urban wildlife crossing in the world and enable P-22 to safely cross the 101. This will give P-22 and others a chance to roam in the valley, meet “the neighbors,” and maybe find a mate.

The proposed Liberty Canyon Wildlife Crossing over the Ventura Freeway at Liberty Canyon in Agoura Hills will “link protected habitats on each side of the freeway together, allowing mountain lions and other wildlife the access to green space they need to survive, and will be the largest such crossing in the world,” says the National Wildlife Federation. It is partnered with the Santa Monica Mountains Fund and many other stakeholders in a fundraising campaign “to protect Southern California’s mountain lions, and to advocate for the critical habitat linkages they require to ensure a healthy future for people, mountain lions and other wildlife in this highly urbanized landscape.”

The “face” of the campaign is P-22, who the National Wildlife Federation’s Pratt-Bergstrom says, “is a natural poster-boy for the campaign. He’s a handsome, lonely bachelor and all of a sudden people got why wildlife crossings were needed -- they could relate to his plight of needing to move around to mate and to survive. Freeways have fragmented his and other cats’ habitat in the Los Angeles area and they are threatened with extinction. Crossings are very tangible, and will make a difference to mountain lions and other animals, and also be a monument to our dedication to wildlife. People can see it as they drive on the freeway, it captures the imagination, and there is something rewarding about knowing we helped get animals safely across the freeway.”

The downside of his celebrity may be loneliness and disappointment. “A female to mate with doesn’t seem likely in the future,” says Pratt-Bergstrom, “although I never say never with wild animals. But he is trapped, surrounded on all sides by freeways and development, and was lucky to survive his journey to Griffith Park. Most of his relatives lose their lives trying to cross the roads, so the odds are he’ll remain a lifelong bachelor.”

Understanding the nature of P-22’s journey helps personalize his experience and underlines the need for the wildlife crossing. “P-22 made a journey that crossed 101 and 405. We retraced this route last year over four days leading up to P-22 Day on October 22, and will again this coming P-22 Day (October 22, 2017). I don’t know how he made it without getting killed last year with all the road crossings and cars. I don’t know how he did it. The journey was extraordinary to reach his now home range of eight square miles, which for a normal adult male would usually be 200-250 square miles. Not every cat would have made that journey,” says Pratt-Bergstrom.

A growing city severely impacts biodiversity. "We continue to put lots of pressure on nature," says the Natural History Museum’s Miguel Ordeñana. “Griffith Park is one of the biggest city parks in the country and a unique urban wildernesses in the city. However, it is not managed by the city for wildlife. The city does not have a biologist on staff to manage this important park and other city-owned natural resources. As a result, it is managed solely for recreation, entertainment, and profit, placing a lot of pressure on the park as a vulnerable wildlife oasis. The park’s popularity combined with the city's lack of resources to manage and protect wildlife (limit off-trail hiking, keeping dogs on leashes, etc.) puts the park at risk for being loved to death.

"The obstacles he's overcome and continuing to face are indicative of what the local mountain lion population is going through. They could be extinct in 50 years if the wildlife crossings are not built and habitat connectivity is not improved."

Ordeñana concludes: “People buy homes, not knowing they need to share the environment, which is a recipe for conflict, especially when people decide to live in prime real estate on the boundaries of urban wilderness areas. Out-of-towners are unaware we have these big cats. Better outreach is needed to increase their awareness and stewardship of their natural surroundings.”

Uniquely, the City of Los Angeles’ public officials and private citizens have embraced and fallen in love with P-22. Says NWF’s Pratt-Bergstrom, “If this mountain lion showed up in any other state it would have been shot or removed immediately. I applaud Los Angeles leaders for coming down squarely on the side of native wildlife. And once this project is completed, the LA area will be a model worldwide -- the site of the largest wildlife crossing in the world, a wildlife bridge re-connecting the Santa Monica Mountains ecosystem over 10 lanes of the 101 freeway.

“It’s pretty cool when a city can celebrate a mountain lion living in its midst and is willing to help build this bridge. When the Mayor and City Council passed a declaration making October 22 officially P-22 Day they took a leadership position and set an example for cities all over the world and the country about coexisting with wildlife.”

How to Get into Action and Join the P-22 Movement:

See the movie: there will be a free screening of “The Cat That Changed America”  at the TLC Chinese on Hollywood Boulevard, on Saturday, August 26 at 3 p.m.

Help support the building of the Liberty Canyon Wildlife Crossing.