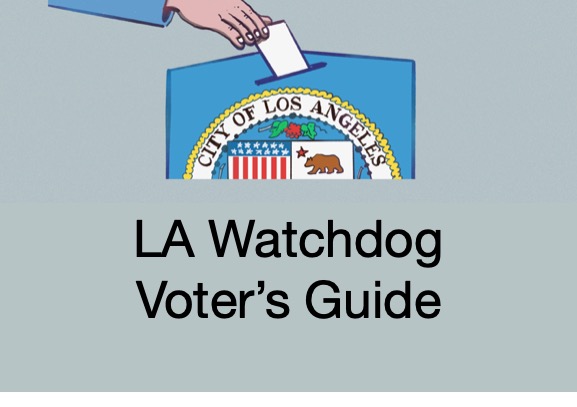 LA WATCHDOG - The LA Watchdog’s Voters Guide for the June 7th primary focuses on the local elections: the City, the County, and the Los Angeles Unified School District.

It also covers selected statewide offices and is passing along recommendations on Superior Court Judges that were provided by a knowledgeable insider.  There is no information on the races for the State Legislature or the US Congress or Senate.

Mayor: Rick Caruso for Mayor.  He is independent of the political machine that controls City Hall and is not owned by the public sector unions.  He has also had experience with troubled organizations, including the LAPD, DWP, and USC.  Karen Bass is an insider and will do little the right the ship.

City Controller: David “Ty” Vahedi has extensive experience in conducting civil and criminal investigations and audits for numerous public agencies.  He is independent of City Hall. Do not vote for Councilman Paul Koretz who is endorsed by most of the City Council, the people he is charged with overseeing, and the inexperienced Kenneth Mejia, inexplicitly endorsed by The Times despite his inappropriate remarks about Biden and others.

The Los Angeles Times has swung way to the left.  If its endorsements for the City Council were elected, it would result in a number of inexperienced councilmembers, efforts to defund the police, the densification of neighborhoods, budget havoc, and mission creep. Rather than vote for radical change, we may be better off with the devils we know.

CD 1: Gil Cedillo, the incumbent, is an experienced politician and, while not perfect by any means, he is preferable to community organizer and progressive Eunisses Hernandez who has been endorsed by The Times.

CD 3: Scott Silverstein is an attractive alternative to Bob Blumenfield, but he is a long shot because Blumenfield is the incumbent and has a huge financial advantage.

CD 5: Sam Yebri is independent of City Hall and is fiscally responsible.  Katy Yaroslavsky is a woke progressive, having worked for Supervisor Sheila Kuehl.

CD 7: Monica Rodriquez is the incumbent and has a huge financial advantage over Elisa Avalos, the only other candidate.

CD 9: Curren Price, the incumbent, is in a tight race with Dulce Vasquez.  While she is in inexperienced and slightly more progressive than Price, she has more energy and ideas than Price.  A tossup.

CD 11: Traci Park, a lawyer from Venice, supports the police department and ending encampments on City streets and parks.  Erin Darling, endorsed by The Times, and Greg Good, a LAANE supporter, are too woke and inexperienced to cope with the issues involving Venice and the surrounding area.

CD 13: Mitch O’Farrell, the incumbent, is the devil we know.  He has been beholden to developers of the Hollywood Millennium and other controversial high rise developments in Hollywood.  However, Mitch has provided good constituent services.  The contenders are too progressive, including Kate Pynoos, who worked for Mike Bonin and is endorsed by The Times, and Hugo Soto-Martinez, a woke union organizer. Both are not supportive of the Police Department and oppose the anti-camping ordinance.

CD 15: Danielle Sandoval is a Neighborhood Council Budget Advocate, is endorsed by The Times, and independent of City Hall, unlike the well-funded Tim McOsker, a City Hall insider.

Measure BB: No.  While this measure would grant business located in the City appears to be a no brainer, it will add to the City’s costs and distort the market for goods and services.  There are concerns about favoritism and corruption. The voters will most likely approve this politically motivated measure.

The Times endorses Maria Brenes (District 2). Her major opponent is endorsed by UTLA, a huge negative for the financially stressed District.

District 3: Henry Stern wins the LA Watchdog’s vote.  While he is backed by a number of public sector unions, his primary opponent is State Senator Bob Hertzberg, a professional politician who is too friendly with developers and favors numerous bond measures and new taxes.  The Times has endorsed Lindsay Horvath, but she is a the woke mayor of West Hollywood.

Sheriff: Robert Luna is recommended.  The current sheriff, Alex Villanueva, is too controversial.  Luna is not affiliated with the Sheriff’s office unlike the other candidates, has run the Long Beach Police Department for seven years until he retired in December after 36 years of service, and has been recognized by regional and national police organizations.   Luna is endorsed by The Times and Daily News.

Assessor: Jeffrey Prang has done an excellent job and deserves to be reelected.

Governor: Gavin Newsom is the favorite. Long shots include Michael Shellenberger (no party preference), who received a favorable writeup in The Wall Street Journal, and State Senator Brian Dahle, the Republican candidate.

Controller: Ron Galperin.  As City Controller, he has done an excellent job, developing audits that were not well received by City Hall, especially the one that exposed the excessive cost of permanent supportive housing for the homeless.  He will maintain his independence from the Legislature and the Governor.

Superintendent of Public Instruction: Tony Thurmond is the incumbent, but does not deserve our vote.  He is for amending Prop 13 and opposes charter schools.  Lance Christensen is endorsed the Republican party and the Daily News, but not has raised any money.

Here are the Republican Party’s endorsements.

And the Democrat Party’s endorsements.