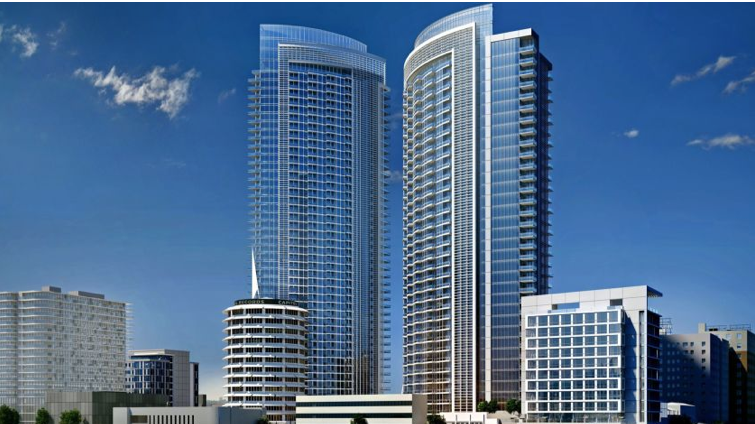 LA WATCHDOG--One of Mayor Eric Garcetti’s Back to Basic tenets was to “increase transparency and civic engagement.”

But this is not the case when it comes to the $1 billion Millennium Hollywood, now rebranded as the Hollywood Center Project.

In 2013, the New York City developers, Millennium Partners, working with Councilmen Eric Garcetti, Jose Huizar, and Mitch Englander, “persuaded” the Herb Wesson led City Council to more than double the size of this megadevelopment, boosting Millennium’s profits by hundreds of millions of dollars.

The City Council approved the up zoning of this 1.2 million square foot project despite the vehement opposition of the surrounding Neighborhood Councils whose stakeholders were concerned about increased traffic congestion.  The community also objected to the out-of-character twin towers (39 and 35 stories) that would exceed the existing height limits in Hollywood by over 200 feet. The City Council also ignored the fact that the development was on the active Hollywood Earthquake Fault and that Caltrans was concerned about the adverse impact on the Hollywood Freeway and its on and off ramps.

Of course, it helped that Millennium Partners spent over $4 million on lobbyists, lawyers, campaign contributions, and contributions to other pet projects such as the controversial 44 acre Hollywood Central Park that will cover a portion of the Hollywood Freeway and promised almost $20 million in community benefits.

However, in 2015, Superior Court Judge James Chalfant ruled that the Millennium’s Environmental Impact Report (“EIR”) was deficient, essentially blocking the project.  The community won, or so it thought.

On April 15, 2020, the developers filed a new EIR.  But how will opponents be able to comment on this 12,000-page opus when they are confined to their homes because of Garcetti’s Stay at Home order?  As part of their effort to ramrod this deal through the planning process, Garcetti, his director of Planning, Vince Bertoni, and local czar, Councilman Mitch O’Farrell, have refused, despite numerous requests, to extend the 45 day comment period that ends on May 31.

While the Millennium has reconfigured the project, not much has changed.  The proposed 1.2 million square foot development is still on an active earthquake fault. The twin towers (46 and 35 stories) will dwarf all the other buildings in the area.  Congestion will only be worse now that numerous luxury high rise developments have been erected in Hollywood.  Caltrans will still have major objections.  And Millennium will still reap hundreds of millions of dollars in additional profits.

But what has changed is that there is an “ongoing federal criminal investigation into public corruption throughout the City of Los Angeles related to multiple suspected pay-to-play schemes.”

The Millennium has always had “scent of swindle” about it.  And this stench is augmented by the unwillingness of O’Farrell and Garcetti to extend the deadline for comments to the EIR and Millennium’s failure to disclose how it has greased the skids.

We have two simple recommendations for Mayor Garcetti and the Nury Martinez led City Council that are consistent with his policy of transparency and civic engagement.

One, extend the public comment period for the EIR for 90 days after the Stay at Home order is lifted.  That will allow the public and other governmental agencies to have an opportunity to comment intelligently on the 12,00-page EIR.

Two, the Planning and Land Use Management Committee should hold open and transparent hearings on this $1 billion megaproject, its impact on Hollywood and the surrounding neighborhoods, and the developers’ relationships with the City.  Importantly, O’Farrell, who has benefitted from developer campaign contributions, should not have the final say.

Angelenos deserve an open and transparent government, not one where pay-to-play real estate deals are concocted behind closed doors.