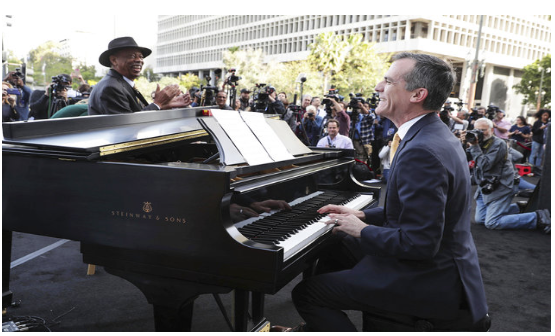 LA WATCHDOG--Last week was not a good one for Mayor Garcetti.

Measure EE, LAUSD’s $500 million parcel tax, failed to win even a majority of the votes despite the full-frontal support of Mayor Garcetti and an $8 million war chest funded by self-serving public sector unions and his billionaire buddies looking for special treatment from the political establishment.

The City’s homeless count increased by 16%, to over 36,000 people, despite outlays of more than $1 billion over the last two years.

LA has turned into a landfill as 228 tons of garbage are dumped illegally on our streets and alleys each week because our reactive City is not capable of enforcing the laws.

And then there is the possibility of dangerous diseases (typhus, typhoid fever, black plague) at City Hall and Skid Row because of the unsanitary conditions associated with illegal dumping and the homeless using our streets and alleys and City Hall grates as bathrooms.

But the coupe d’gras was the front page, spot on article in Sunday’s California Section by Los Angeles Times columnist Steve Lopez, Welcome to Garcetti’s LA: Heaps of Trash, Hordes of Rats, and Very Little Leadership, where he said, “We’re in troubled waters on a ship without a captain, and though there might be a few pretenders on the bridge, nobody trusts them.”

But left unsaid is … ‘what happens when the music stops?’.

From the time that Garcetti became mayor in 2013, revenues will have increased by $2 billion, or 45%.  This includes a $400 million, 6.4% increase for the upcoming fiscal year.

Despite this surge in revenues, our lunar cratered streets are still some of the worst in the county. Our parks and their toilets are a disgrace.  Our urban forest is being neglected despite its massive environmental benefits. And the list goes on.

The City tells us they have eliminated the Structural Deficit.  That is true, assuming you do not count such inconvenient details as employee raises over the next four years and the proper funding of the $10 billion Deferred Maintenance budget and the $15 billion unfunded pension liability.

So, what happens when our debt fueled economy stumbles and fails to deliver the hefty revenue increases that the City is anticipating?

Will the City tell the police, firefighters, and civilian workers that their projected raises of $600 million will be put on hold?  Or will the City continue to neglect the homeless, allow our streets and alleys to be garbage dumps, divert revenue from our streets, parks, and urban forest, and underfund its pension plans?

To paraphrase Steve Lopez, do you trust Garcetti, a “kitten trying to do the job of a lion,” to captain the good ship Los Angeles and its 4 million passengers through turbulent seas to a safe harbor?