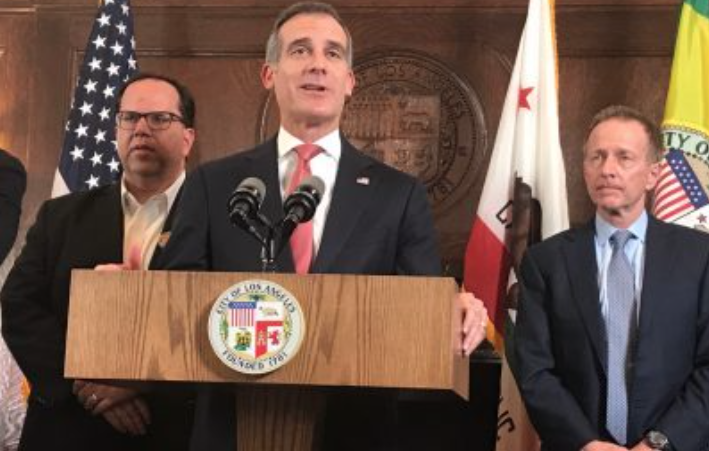 While the political pundits will slice and dice why this “Leap of Faith” measure failed to get even a majority of the vote, much to the surprise of Mayor Eric Garcetti and the political establishment which spent $8 million promoting Measure EE, the fact is that the voters do not trust LAUSD to be responsible stewards of our hard earned cash. Instead, the voters are demanding that LA Unified, the Board of Education, United Teachers Los Angeles, and the political establishment clean up their acts by embracing the many needed reforms before they ask us to approve any tax increases.

The first step is for LA Unified to submit a multiyear financial plan to the Los Angeles County Office of Education by July 1 (as required by law) showing that the District is solvent and is able to maintain adequate reserves.  The County has expressed concern on numerous occasions that LAUSD is spending more than it receives from the State and Federal governments and is using one-time revenues to cover on-going operating expenses.

If LAUSD is deemed not to be solvent, the County can take over the District.

LA Unified needs to develop realistic strategic, operating, and financial plans that are more than aspirational.  These plans must focus on student outcomes and safety and take into consideration the real world and the demographics of its student body, including the declining birth rate of its constituent families.

The District must also accommodate the desire of students and their families to attend higher achieving charter and magnet schools, contrary to wishes of UTLA, the combative teachers’ union.

LA Unified needs to “right size” its operations because the student population has dropped by more than a third, from 750,000 to less than 500,000 students.  This includes the Beaudry bureaucracy and staffing levels at the schools.  While this may be difficult given the political and financial muscle of its unions, what is more important: the students or the unions?

The District needs to develop a plan to either sell or lease its underutilized and surplus properties.  This will not only provide funds to reduce its outstanding debt, but eliminate the expense and overhead required to maintain the properties.

LAUSD must also come to grips with its unsustainable pension and post-retirement medical plans that are demanding an increasing share of the budget, crowding out basic services for the students. Together, these two plans have an unfunded liability of $22 billion, more than double its annual budget.

LA Unified must improve the transparency and oversight of its finances and operations, not just of the incremental funds as was offered up in Measure EE.

One alternative is to reach out to the City’s charter authorized Neighborhood Councils and establish an independent Oversight Committee, following in the successful example of the Department of Water and Power.

There were also numerous other recommendations contained in Superintendent Ramon Contines’ November 2015 Independent Financial Review Panel report that “warned of a looming financial disaster for LAUSD.”  This was followed up by a report in June of 2018 by the Reason Foundation, A 2018 Evaluation of LAUSD’s Fiscal Outlook, Revisiting the Findings of the 2015 independent Financial Review Panel.

LAUSD has a long way to go to establish trust with the voters, especially given poor student outcomes, its Structural Deficit, the expenditure of $12.5 million for the special election, and the $1 million spent by the LA Unified on “educational outreach.”

Unfortunately, trust in City Hall has reached new low point. We were misled about Measure EE.  We are seeing a growing homeless population despite the outlay of billions.  Our streets and alleys are dumping grounds for tons of garbage and human waste.  And rats, fleas, and disease are occupying DTLA.

LA Unified has a difficult road, but a policy of increased openness and transparency will help earn the trust of the voters.  But it will take time.