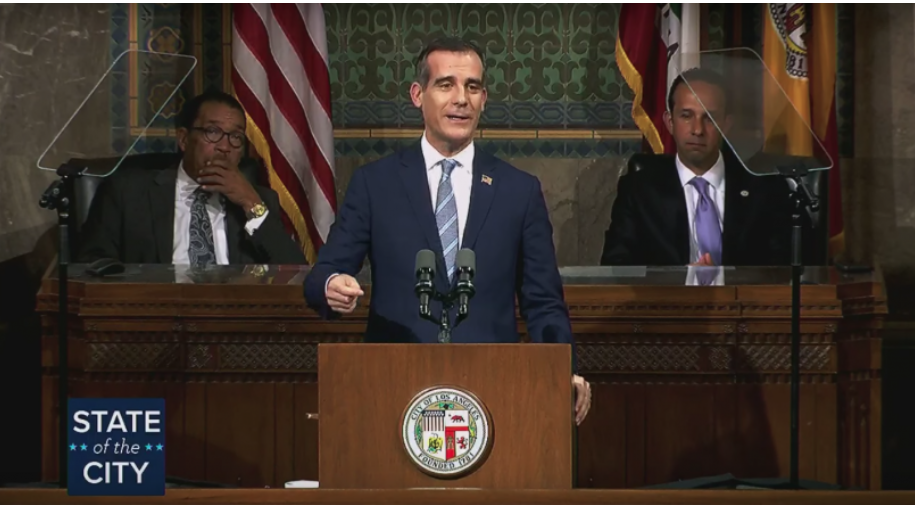 Garcetti is expected to focus a significant portion of his address on homelessness and climate change.

He will also address education and the need for voters to approve Measure EE, the $500 million parcel tax that will allow LAUSD to pay its ever-increasing pension contributions and fund salary increases for the teachers.

But will the Mayor address the City’s Structural Deficit which is expected to exceed $1 billion a year for the next four years?

While the City’s Four-Year Budget Outlook eventually shows a surplus of $100 million, this does not consider raises for the City’s civilian employees, the police, and fire fighters.

The Outlook does not provide for adequate funding to maintain and repair the City’s streets, sidewalk, parks, and the rest of its infrastructure.

The Outlook assumes an overly optimistic investment rate assumption of 7¼% which allows the City to short change its two underfunded pension plans by an estimated $500 million a year.

And all this assumes a robust economy, increased City revenues, and a strong stock market. But what happens if the spaghetti and meatballs hit the fan?

Do not expect any realistic solutions to the City’s Structural Deficit and the implied Intergenerational Theft where today’s liabilities are dumped on the next generations of Angelenos.