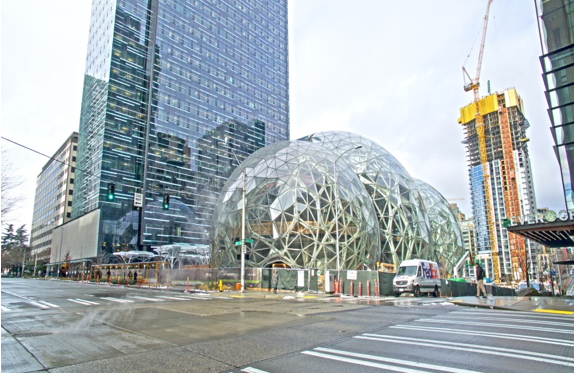 LA WATCHDOG-APRIL 1, 2018--According to a secret memo prepared by the office of Mayor Eric Garcetti, Amazon has reached a preliminary agreement with the City, the County, and the State to locate its second corporate headquarters (“HQ2”) in the city of Los Angeles, primarily in the area surrounding the Union Station transportation hub and the nearby Los Angeles River.

Over the next nine years, Amazon will hire as many as 50,000 employees with an annual payroll of over $5 billion, an average of more than $100,000 per employee.  Amazon has committed to spending over $5 billion in capital expenditures, in large part on more than 8 million square feet of Class A office space.  The company has also indicated that it will aid in the revitalization of its portion of the Los Angeles River, help finance nearby affordable and market rate housing for its workers, develop permanent supportive housing for up to 2,000 homeless veterans in DTLA, and work with LAUSD on mentoring programs.

HQ2 will be a huge catalyst for DTLA and the surrounding area, including Boyle Heights, Lincoln Heights, the Arts District, and many other neighborhoods that are within a 10 mile radius.  The multiplier effect of Amazon’s investment will also result in tens of billions of additional investment in the City and the County and create an estimated 50,000 new well-paying jobs.

Importantly, Amazon’s decision to locate HQ2 in the City of Los Angeles was strongly influenced by the massive amount of human capital that resides in the nation’s second largest metropolitan area.  This includes not only software engineers, but the creative types associated with Hollywood and our burgeoning arts community, our excellent university system, and the well-established business community.

Of course, Amazon’s decision was influenced by generous incentives from the City, County, and State, estimated to be in the range of $5 billion over the next ten years.  While the details of the specific incentives are contained in an appendix that is under lock and key, we do have a broad understanding of the tax incentives and abatements that are being offered to the company.

Governor Brown and the leaders, both Democrat and Republican, of the State Senate and Assembly have agreed to designate the area surrounding Union Station and the nearby river parcels as an Enterprise Zone. The company will then be eligible for very generous New Employment Tax Credits.

The State has also agreed to waive the burdensome CEQA (California Environmental Quality Act) for this massive development. At the same time, Amazon has agreed to a number of environmental initiatives, including carbon neutrality (net zero emissions).

The State, along with the City, County, and Metro, have agreed that the build out of HQ2 would not be subject to any sales taxes.

The State has also tentatively agreed to exempt existing Amazon employees from capital gains tax on any existing gains in the Amazon stock price, including those from stock options.  This exemption does not apply to Jeff Bezos, Amazon’s founder and CEO and considered to be the world’s richest man with a net worth in excess of $100 billion (all self-made).

The City, County, and Metro, have also agreed to sell selected parcels of land at very favorable prices to Amazon, including the Twin Towers.  They have also agreed to form an Enhanced Infrastructure Financing District where the incremental property taxes (other than those involving LAUSD) will be invested in the Amazon development area.

Importantly, the City and the County will use its power of eminent domain to buy needed parcels, including the 125 acres Piggyback Yard on the east side of the River and selected sites in Boyle Heights and Lincoln Heights suitable for multifamily housing.

The City and the County have also agreed that the HQ2 development and the related housing developments will not be subject to the City’s linkage fee.  Furthermore, Amazon will not be required to enter into a Project Labor Agreement or Prevailing Wage arrangements, saving an estimated $1 billion.

The City has also agreed to waive its Gross Receipts Business Tax for the first twenty years of operation.  And the Department of Water and Power will also waive the City Utility Tax (12.5%) and assist Amazon in reaching its carbon neutral objective and saving water, including the capture of storm water.

While the details of tax abatements and incentives will be revealed over time, especially as they are vetted by the public and legislative bodies, we do not need to engage in bashing the incentives, Amazon, its billionaire CEO, Mayor Garcetti, and political establishment for these giveaways. Rather, we should be thanking the political establishment and focusing on the multiple benefits that HQ2 is bringing to our City and the metropolitan area.  The $5 billion in incentives are a worthwhile investment that will revitalize DTLA and the surrounding area and send a message that LA is world class city and is open for business.