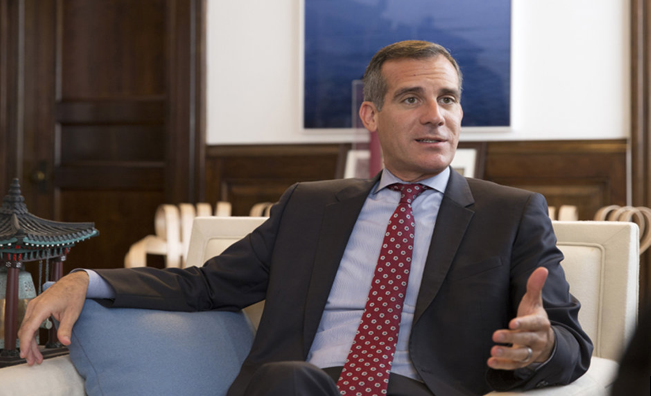 LA WATCHDOG--“Resilience is a value that guides everything we do in Los Angeles, because we know that the decisions we make today will shape the future our children and grandchildren will inherit. The Resilient Los Angeles plan will help us strengthen our infrastructure, protect our economy, make our institutions more inclusive, and create safer neighborhoods.” - Mayor Eric Garcetti

If only Mayor Eric Garcetti paid as much attention to the devastating impact of the City’s long term financial and budget problems on the next two or three generations of Angelenos as he does to the environment and his political aspirations.

And if only Mayor Garcetti would implement the ten simple budget recommendations of the Neighborhood Council Budget Advocates that address the Structural Deficit, the deferred maintenance of our infrastructure, the unfunded pension plans, and Intergenerational Theft, the dumping of today’s obligations on future generations of Angelenos.

In 2013, one of Garcetti’s Back to Basics Priority Outcomes was for the City to “Live Within Its Financial Means.”  But once again, a Garcetti promise turned out to be nothing but hot air.

On April 20, Garcetti will go public with his so called “balanced” budget for the next fiscal year, telling us how hard he and the City Council worked to eliminate a projected budget deficit of $250 million.  But these heroics are pure baloney as the City should be generating surpluses as revenues have increased by $1.4 billion (31%) since he became mayor.

This so called “balanced” budget is held together by duct tape as it relies on cutting services and programs to fund generous raises for the police and civilian employees, higher pension contributions as a result of lowering the investment rate assumption to a still optimistic 7.25%, and the insidious automatic step increases in salaries.

This budget will not address the City’s Structural Deficit (where expenditures, primarily personnel costs, increase faster than revenues) that will result in a river of red ink for many years into the future.

Nor will it address the City’s unfunded pension liability of $15 billion (71% funded) and the fact that the City’s two pension plans are being short changed by $400 to $500 million a year because of the City’s reliance on an overly optimistic investment rate assumption of 7.25%.

Nor will the budget tackle the deferred maintenance backlog of more than $10 billion as the City’s streets, sidewalks, parks, trees, buildings and facilities, and the rest of its infrastructure have been neglected for years in order to fund ever increasing salaries and benefits demanded by the campaign funding leadership of the City’s public sector unions.

Over the past years, the Neighborhood Council Budget Advocates (www.ncbala.com), representing the City’s 97 Neighborhood Councils, have made a series of budget recommendations that have been ignored by the Mayor and the Paul Krekorian led Budget and Finance Committee.

This year, the Budget Advocates made the following ten budget recommendations, beginning in November and culminating with its 2018 White Paper (Who’s In Charge? And Will They Act on Our Ten Simple Recommendations).

Increase transparency into the City’s budget and finances by holding monthly town hall meetings at times convenient to the City’s residents such as weekends or after 7 PM on weekdays.

Mandate that labor contracts or other agreements entered into will be revenue neutral within the term of each contract/agreement, i.e., will not increase the budget gap or result in further diminution of services.

Develop and implement a ten-year financial plan based on realistic and dynamic assumptions that eliminate the Structural Deficit, provide for the maintenance and repair of the City’s infrastructure, pay for the City’s out-of-control litigation costs, and begin to reduce the unfunded pension liability.

Develop a comprehensive plan to repair and maintain our streets and the rest of the infrastructure, including our sidewalks, parks, and urban forest.  Accidents on City streets and sidewalks that need repair account for a substantial portion of the City’s litigation costs.

Benchmark the efficiency of the City services, beginning with Public Works, Recreation and Parks, Building and Safety, and General Services.

Outsource to private contractors 50% of the repair and maintenance of our streets and sidewalks and compare the results with City-staffed crews.  Work performed by independent contractors must be supervised to ensure quality and that the work is on time and on budget.

Build the Reserve Fund and Budget Stabilization Fund to an amount equal to 10% of the General Fund, a level recommended by the City Administrative Officer and the State of California. Unappropriated balances are not considered reserves.  [Note: The Government Finance Officers Association suggests reserves equal to 17% of the General Fund.]

Develop a capital expenditure plan that addresses the expansion of the Convention Center, the improvement of the Civic Center, the revitalization of the Los Angeles River, compliance with the Clean Water Act, and the modernization of the City’s Management Information Systems and IT infrastructure.  Funds should be allocated directly to capital costs as part of the City Budget and not be swept back into the General Fund.

Establish an independent Office of Transparency and Accountability to oversee the City’s finances and ensure fiscal responsibility.  This recommendation was first made to the LA 2020 Commission, a body established at the suggestion of City Council President Herb Wesson.

Do Mayor Garcetti and the Herb Wesson led City Council have the political will to implement these easy to understand budget recommendations that have the potential to eliminate the Structural Deficit, repair our infrastructure, fund the City’s two pension plans, and mitigate Intergenerational Theft?

If not, we need to show our frustration / anger by voting against any proposed tax increases that the City, County, and State put on the ballot for our approval.  This will send a clear message to the Mayor and the City Council that we do not support Intergenerational Theft and want Garcetti to honor his pledge that the City of Los Angeles will “Live Within its Financial Means.”