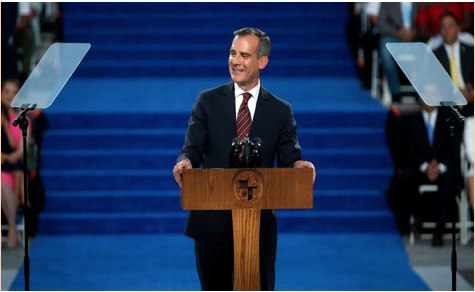 LA WATCHDOG--In his second inaugural speech that would make any upwardly mobile politician proud, Mayor Eric Garcetti took credit for the City’s economic recovery and promised us a glorious and prosperous future. But he was short on the details.

According to Garcetti’s press release, “He began his first term by navigating the City through the end of the Great Recession with ambitious steps that helped to bring billions of dollars of investment to the City, create nearly 160,000 new jobs, and slash the unemployment rate in half.”

This sounds like the kid who thinks he hit a triple, but was actually born on third.

Over the last five years, the US economy has been on a roll, lifting all boats, so much so that the City’s General Fund increased by $1.3 billion (28%) since Garcetti became Mayor on July 1, 2013.

Despite record revenues, the City still has a Structural Deficit as Garcetti and the Herb Wesson led City Council are staring at a budget deficit next year of $100 million.  But this does not include additional expenses for pensions, labor contracts, streets, and affordable housing.

According the City’s Official Statement for its issuance of Tax and Revenue Anticipation Notes, the City’s contribution to its two underfunded pension funds will increase by $138 million if the Trustees lower the investment rate assumption to 7¼% from 7½%.

Even then, the rate still does not reflect the real world as CalPERS is projecting a return of 6.2% over the next ten years.  This implies an even larger unfunded pension liability that is currently north of $20 billion according to Moody’s Investor Service, the bond rating agency.

The labor contracts with the Police Protective League representing almost 10,000 officers and the Coalition of LA City Unions representing over 15,000 employees expire on June 30, 2018. These new contracts will probably add $50 to $75 million a year to the City’s payroll.

We are now looking at a $300 million shortfall for next year.

At the same time, the City dinged the Pavement Preservation Plan for $19 million to help balance the City’s budget, one that is held together by bubble gum and aggressive assumptions.

While affordable housing is one of the Mayor’s priorities, it is not a budget priority.  Rather, he is urging the City Council to pass a linkage fee on new residential and commercial development that will raise close to $90 million.  Of course, this fee will increase the cost of housing, a minor detail as far as City Hall is concerned since the cash is lining their pockets, but not so minor for developers, investors, renters, and home buyers.

Of course, there other big ticket issues that the City is ignoring, including the maintenance of our parks, libraries, and urban forest; its storm water master plan; and its information technology and management information systems.  There is also no funding to offset the lowering of the business unfriendly gross receipts tax.

While “smooth at the podium” Garcetti’s rhetoric and goals make for great sound bites and headlines, they are just that if there are not adequate resources to fund his ambitious programs.

As a first order of business, Garcetti and the City Council need to take their heads out of the clouds and focus on eliminating the Structural Deficit (where personnel expenditures increase faster than revenues) and develop a “fiscally responsible spending plan” that supports Garcetti’s Back to Basics priority goals of a safe, prosperous, livable, sustainable and well run city that lives within its financial means.

To quote the Los Angeles Times, “Los Angeles cannot be a progressive, transformed city if it can’t pay the bills. The mayor and City Council need to get real on the city’s finances.”