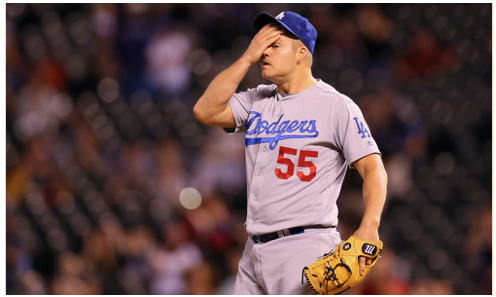 LA WATCHDOG--At the All Star break, our Los Angeles Dodgers have the best record (.678) in Major League Baseball, having won 61 games and losing only 29. Over the past month, they have notched 24 wins and only 4 losses, a winning percentage of an impressive 85.7%  This streak included three game sweeps against the then first place Colorado Rockies and Arizona Diamondbacks, allowing the Bums to open a 7½ game lead over the second place Diamondbacks in the National League West.

While the Dodger offense has been streaky, it has scored the second most runs in the National League. But this may be misleading as it includes the first 22 games of the year when the Dodgers had a losing record.  Since that time, the Dodgers have won over 75% of their games.

The real star has been the team’s pitching.  The Dodgers, despite only one complete game, lead the National League in Earned Run Average, strikeouts, fewest bases on balls, and lowest opponent batting average.

And as a result the Dodgers lead MLB in run differential having scored 163 more runs than their opponents.

The Dodgers also lead the majors in paid attendance with average of 44,695 per game.

But all is not happy for Dodger fans in Southern California as three million households do not have access to the Dodgers games on TV because of a contract dispute between Spectrum (the successor to Time Warner Cable) and other pay TV operators such as Dish, Direct TV (part of AT&T) and Cox.

In 2013, Time Warner Cable agreed to pay the Dodgers $8.35 billion for its media rights over the next 25 years. This very rich offer was predicated on the assumption that the other pay TV operators would pay a monthly fee of $5 per subscriber for SportsNet LA, the home of the Dodgers, and then pass it along to their subscribers as part of their basic package.

But that was not to be as the pay TV operators were concerned about the impact of higher prices on their subscriber base.  Many customers were experiencing sticker shock and “cutting the cord.”  This was especially true for ESPN and other regional sports networks where viewership was disproportionately lower than the ever increasing cost of these “must see” sports channels.

The pay TV operators were also wary of Time Warner Cable (now Spectrum) because they were burned for a $4 per month fee to help TWC fund its 2011, $3 billion 20 year media rights deal for the Los Angeles Lakers, just before the Lakers and their ratings and advertising revenues tanked.  (The Lakers have not made the playoffs for 4 years and finished second to last in the Western Conference in 2016-17, an improvement from the previous year.)

This year, SportsNet LA is expected to lose in excess of $100 million as subscriber fees of around $120 million ... from two million Spectrum customers ... do not begin to cover the payment of at least $250 million to the Dodgers.  This contrasts with TWC’s projections which probably showed $300 million in revenue from five million subscribers, a swing of $180 million, and a nice fat profit.

But the owner of Spectrum, Charter Communications, has not been willing to bite the bullet and recognize its losses on the Dodger contract for accounting purposes.  This would probably result in a write off of at least $1 billion.

But this loss was certainly part of the equation when Charter Communications acquired Time Warner Cable in 2016 as the principal owner of Charter, John Malone, did not become a multibillionaire by leaving money on the table.

Spectrum has been unwilling to enter into a reasonable deal with the pay TV operators in the hope that their subscribers will demand the Dodgers as part of their basic TV package.  In the meantime, Spectrum is forgoing over $100 million in lost revenue a year assuming that it entered into a deal at $3 a subscriber or some other arrangement that considered the Dodgers TV ratings and advertising revenue.

The Dodgers are doing their part as they have the highest payroll in Major League Baseball, estimated to be north of $250 million, not including the luxury tax.  They have also invested an estimated $150 million in upgrading Dodger Stadium.  The Boys in Blue have the best record in the Major Leagues and lead the National League West by 7½ games.  Now is the time for Spectrum and Charter Communications to do their part by biting the bullet and entering into reasonable deals with the other pay TV operators so an additional three million Southern California households have the opportunity to see our Dodgers on the road to the World Series.