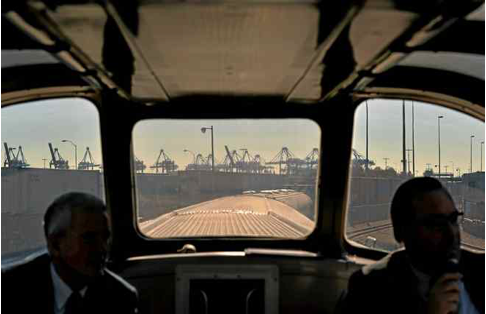 LA WATCHDOG--Operationally, the Alameda Corridor has been a huge success.

This 20 mile multitrack rail expressway that connects the Ports of Los Angeles and Long Beach to the downtown rail yards of Union Pacific and Burlington Northern has resulted in massive transportation efficiencies and savings by reducing the travel time of container laden freight trains from the Ports to downtown rail years to 30 minutes compared to three or four hours prior to its opening in 2002.  (Photo above: Ports through windows of California Zepher.)

It has reduced truck traffic on our already congested freeways by diverting over 10,000 containers a day to more efficient freight trains.

It has also eased congestion on surface streets by eliminating over 200 at grade crossings, primarily because of the Mid Corridor Trench, a 10 mile cut that runs between Route 91 in Carson to 25th Street in DTLA.

There are also massive environmental benefits that accrue to the public as the Corridor has eliminated thousands of tons of pollutants every year and improved the air quality in highly populated areas.

But the finances of the Alameda Corridor are a train wreck as its operating profit of almost $100 million does not even cover its annual interest expense to say nothing about retiring outstanding debt associated with this $2.3 billion project.  As a result, debt has increased by $300 million since 2004, from $1.9 billion to $2.2 billion.

This mound of unsustainable debt includes over $400 million of accrued interest that is the result of the issuance of zero coupon bonds (marketed to investors as “Capital Appreciation Bonds”), a highly controversial financing vehicle where interest payments are deferred until the maturity of the bond.  These bonds have also been labeled as Weapons of Mass Financial Destruction.

The financing strategy was ill conceived from the beginning as the pie-in-the-sky projections assumed an overly optimistic growth in the number of containers transported on the Corridor while the ability to raise rates was capped at the insistence of the two railroads who did not want to be held hostage by the Corridor or the two ports and their politically appointed Board members. 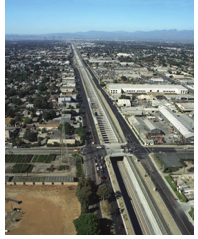 In May 2016, the Alameda Corridor raised $685 million from the issuance of long term bonds.  This money was used to retire existing debt which included at least $75 million in accrued interest.  It will also defer the payment of an estimated over $500 million through 2026, after which time debt service payments (interest and principal) will spike.  And then it will time for another restructuring.

The deferral of debt service will allow the Corridor to meet its cash obligations on its outstanding debt as they will be matched more closely with the Corridor’s cash flow.  Importantly, this restructuring will let the two Ports off the hook as they will not have to advance the Corridor any cash to cover the previously anticipated shortfalls as is required by the Corridor’s bond indenture.

This restructuring is a slow boiling Ponzi scheme where new money is used to pay off existing investors.  And while it may take years for the party to end, the two Ports need to put an end to this scam by owning up to the true cost of the Alameda Corridor.

This will require the Ports to make a long term commitment to pony up at least $50 million a year for the next 25 years.  This will increase the Corridor’s cash flow by about 50% to almost $150 million, or about 6.8% of the outstanding debt.  But this infusion of cash will allow the Corridor to cover its interest expense and retire a portion of its $2.2 billion debt.

Last week, LA Mayor Eric Garcetti and Long Beach Mayor Robert Garcia were on their high horses announcing their plans to make the San Pedro Ports the greenest ports in the world.  But at the same time, they are dumping another multibillion dollar obligation on the future residents of LA and Long Beach that will adversely impact the Ports’ competiveness in the world market.

But then again, Ponzi schemes are standard operating procedure in the City of Los Angeles as Mayor Garcetti and the Herb Wesson led City Council are already burdening the next generation of Angelenos with tens of billions in unfunded pension liabilities and deferred maintenance.