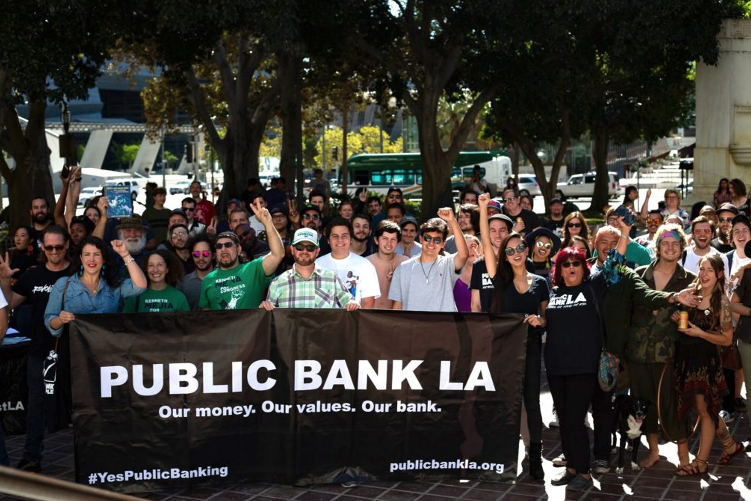 In November of 2018, 56% of the voters rejected Charter Amendment B despite the endorsement of Mayor Eric Garcetti and twelve members of the City Council.  But the voters made the right choice because according to the Los Angeles Times, “Charter Amendment B is one of the most ill-conceived, half-baked ballot measures to come out of City Hall in years, and that’s saying something.”

Nevertheless, the proponents of the Bank of Los Angeles (including Councilmembers Bonin, Raman, Rodriguez, and de Leon) are once again proposing to establish a municipally owned bank. And this time they are claiming that voter approval is not necessary according to a memorandum prepared by the Kaufman Legal Group, the consigliere for many of our local politicians.  Of course, this runs contrary to a promise by former City Council President Herb Wesson and the opinion of the City Attorney and the Chief Legislative Analyst.

The proponents of the Bank of Los Angeles will claim that the bank will help the recovery of the LA economy by financing local infrastructure projects, renewable energy, and affordable housing, which, in turn, will create good paying and union jobs.  At the same time, the bank will save the City millions in interest expense and be a cash cow for the City’s budget.

On the other hand, critics will say that a public bank is an exceptionally risky proposition given the large capital requirements, the exorbitant start-up expenses, loan losses (especially those associated with pet projects of the political establishment and their cronies), the high cost of a data processing operation, the complex regulatory requirements mandated by the FDIC (Federal Deposit Insurance Corporation), and the need for an experienced management team and independent oversight.

But rather than debate the pros and cons of the municipally owned Bank of Los Angeles in the press, the City needs to follow up on the recommendations of the Chief Legislative Analyst to hire an independent consultant to conduct a “policy, fiscal, and economic analysis related to the formation of a public bank serving the City of Los Angeles.”

This independent analysis needs to overcome the perception that a “public bank is a vehicle for politicians to divert legislatively designated funds into a blind pool to fund noneconomic pet projects and loans to politically connected, uncreditworthy borrowers that will result in significant losses that will have an adverse impact on the bank’s ability to continue as a going concern.”

Unlike the process in 2018 where the City Council placed Measure B on the ballot without doing any analysis, proponents such as Councilmen Mike Bonin and Paul Koretz will be well advised to have a good understanding of the economics and risks associated with the municipally owned Bank of Los Angeles before placing the legally required measure on the ballot.