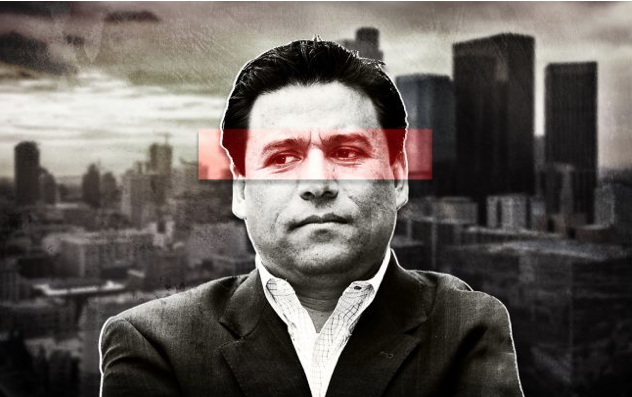 LA WATCHDOG--On Tuesday morning, the FBI arrested Councilman Jose Huizar on “a federal racketeering charge that alleges he led a criminal enterprise that used his powerful position at City Hall to solicit and accept lucrative bribes and other financial benefits to enrich himself and his close associates in exchange for Huizar taking official actions favorable to the developers and others who financed and facilitated bribes.”

The 116 page affidavit filed by the FBI in federal court is a dizzying account of the shakedowns by Huizar (and his cronies) of international (primarily Chinese) and domestic developers with projects in his district that began in 2012 and ended on November 7, 2018 when the FBI raided his offices and house.

But what will Huizar do?  Will he fight the charges?  If so, how does he pay for the high-priced team of criminal defense lawyers?

Or does he cop a plea like the other four defendants in the City Hall pay-to-play corruption scandal?  This will be contingent upon resigning from the City Council; coming clean on all his wrong doings; cooperating with the FBI’s efforts to catch bigger fish in the City, County, and State; making restitution; and serving time in a federal lockup.  In return, Huizar gets a lighter sentence and his mother, brother, and wife, the mother of his four children who was part of the criminal enterprise, receive immunity.

Of course, the next question is, “Who’s next?”

The prime target is Ray Chan, the former General Manager of the Department of Building and Safety and former Deputy Mayor for Economic Development under Mayor Eric Garcetti.  He and Huizar have been in cahoots since 2013. Chan also arranged for a wealthy Chinese real estate magnate to pledge $600,000 in collateral for a loan that allowed Huizar to settle a sexual harassment suit in 2014.  Chan is referred to 105 times in the FBI’s affidavit.

There are also other minions, including lobbyists, consultants, labor leaders, lawyers, City Hall staffers, and other “Associates” of Huizar, all of whom helped facilitate numerous illegal transactions.

But real battles will be when the Feds (and hopefully the City) go after the crooked real estate developers. This would involve not only criminal charges, but the refusal by the City to issue Certificates of Occupancy, eliminating the cash flow to the developers and, importantly, their banks.

In addition, the City and other entities may have the ability under California Code Section 1090 to declare any contracts associated with wrongdoing to be null and void.  This may allow the City to seize the properties of the developers who played ball with the corrupt Huizar enterprise.

There are several developers that are of particular interest.

Developer M, a generous contributor to Huizar sponsored political action committees, was granted permits to build a 35 story, out of character, residential development in the low-rise Arts District.

Chairman E, a Chinese national and a billionaire, wanted to develop a 77-story mixed used development in DTLA.  Not only did he provide the collateral for Huizar’s $600,000 loan (which he lost when Huizar defaulted on the loan), he also entertained Huizar and his henchmen in Las Vegas with free chips, fancy dinners, and high-end call girls.

Chairman D, a Chinese national with extensive worldwide real estate holdings, played ball with Huizar to facilitate the redevelopment of an existing property into a mixed use development consisting of 650 residential units, 300 hotel rooms, and 80,000 square feet of commercial space.

The FBI and the US Attorney’s Office should go after these and other developers with the full force of the federal government.  This may create an international incident as the Chinese developers probably have strong ties with China’s leaders.  But that may be a positive because it will highlight the corruption that has enveloped City Hall.

The refusal to issue Certificates of Occupancy, the prospects of property seizures, and the filing of criminal charges will send a strong message to the banks that they must be extraordinarily careful to avoid loan losses.

At the same time, the Mayor and the City Council, who knew (or should have known) about Huizar’s illegal activities, must endorse reform.  This would include implementing Councilman David Ryu’s call for a charter measure that would limit the City Council’s ability to meddle in the planning process. In a June 24 op-ed in The Times, former City Councilman Michael Woo called for an independent, well financed Inspector General who would have the ability to initiate criminal investigations.

Without reform, why should we vote to approve the amendment of Proposition 13, the Split Roll, that would funnel $250 million in new money to our corrupt and fiscally irresponsible elected officials who occupy City Hall?