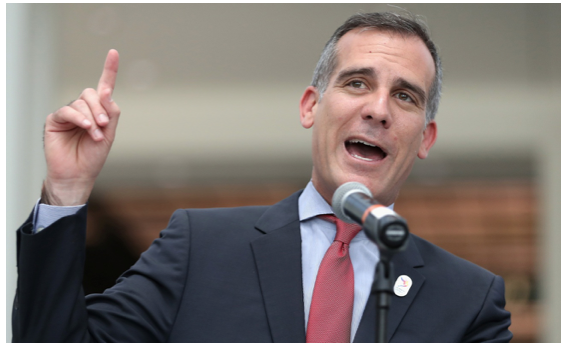 LA WATCHDOG--On April 20, 2018, Mayor Eric Garcetti will submit his Proposed Budget for the fiscal year beginning on July 1, 2018 to the City Council.  Between now and then, the Mayor and the City Council will develop the budget behind closed doors without any input from the public, including the charter authorized Neighborhood Councils.

This lack of transparency is inexcusable, especially given that one Garcetti’s Back to Basics pledges was to “increase transparency and civic engagement.”

We may be able to pardon this failure to honor his promise of transparency if the City’s finances were in good shape.  But that is not the case as the City’s budget and finances are a disaster waiting to happen.

The City is anticipating a budget gap for next year of $270 million despite a $100 million increase in revenues.  This shortfall is the result of higher personnel costs, new labor contracts for the police and civilian employees ($50 million), and higher than anticipated pension contributions ($120 million).

This budget gap will be lowered by $40-50 million as property taxes will be higher than expected as the assessed value of the City’s real estate increased by 6.6% to $569 billion compared to 4.5% used in the City’s previous estimates.

The City is also looking forward to cashing in on other new sources of revenue.  These include the pot tax, the exclusive trash franchise fees, its share of the increase in the new state gas tax of 12 cents per gallon, and the Local Return revenue from Metro associated with the half cent increase in our sales tax that was approved by the voters in November.

But this second source of new money is not intended to enrich the City’s General Fund or to pay for ever increasing salaries and pension contributions, but rather to cover administrative and enforcement costs for pot shops and trash haulers or to repair and maintain our lunar cratered streets and other parts of our transportation system.

As opposed to treating us like mushrooms (in the dark and covered with manure), Garcetti and the Paul Krekorian led Budget and Finance Committee should host monthly meetings at convenient times for working Angelenos to discuss in detail the budget and related policy decisions, including those related to the repair of our City’s infrastructure, the City’s two seriously underfunded pension plans, the Reserve Fund, and future budget deficits (the Structural Deficit).

The Mayor should also allow the Neighborhood Council Budget Advocates full and complete access to the budget process, including the Mayor’s budget team, department heads, and department budget submissions that are due on November 17.

The Mayor’s office should follow up on its statement to establish a committee to investigate new sources of revenues, including the Budget Advocates’ twenty revenue producing ideas for the General Fund that were presented in May to the Budget and Finance Committee.

At the Budget and Finance Committee meeting on May 2, Councilmember Paul Krekorian asked the Budget Advocates for their ideas for saving money.  To accomplish this task, the City should allow the Budget Advocates to work with department heads and their staffs to investigate the City’s operations and to develop recommendations to save money and improve efficiency.

The Mayor’s office should also disclose his plan on how the City intends to finance its many capital intensive infrastructure projects.  These include the repair of our failed streets ($4 billion), the revitalization of the Los Angeles River ($1.5 billion), the improvements to the City’s Civic Center ($300 to $500 million), the expansion of the Convention Center ($470 million), and the compliance with the Clean Water Act ($7.4 billion).

Mayor Garcetti, how do you propose to balance the budget?  How do you intend to repair our deteriorating infrastructure?  Will you honor your promise of transparency?