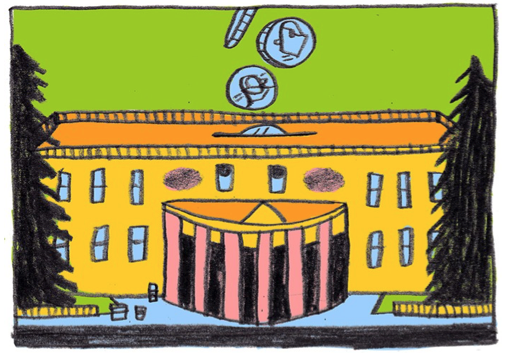 LA WATCHDOG--The establishment of the municipally owned Bank of Los Angeles is an idea that is enthusiastically supported by City Council President Herb Wesson and the other members of the Council.

According to Councilmember Paul Krekorian, the chair of the Ad Hoc Committee on Job Creation, the City “aims to create a state-chartered public bank that will provide banking services, reinvest in the communities, neighborhoods, and residents of the City of Los Angeles primarily through the acquisition, construction, and rehabilitation of affordable and workforce housing, utilizing deposits and providing financial services to local businesses.”

But in listening to the three members of the Ad Hoc Committee on Job Creation (Krekorian, Blumenfield, and Harris-Dawson) that attended its October 4th meeting (Wesson and Englander were no shows), they view the bank as just another source of cash to fund their costly initiatives and pet projects without any regard to the ability of the borrowers to repay the loans.

But unbeknownst to the gung ho members of the Ad Hoc Committee on Job Creation and the other financially naïve members of the City Council, banking is a complex and unforgiving business, especially when borrowers fail to repay their loans.

The City only has to review its history with the now defunct Los Angeles Community Development Bank.  This bank that was designed to create jobs in empowerment zones closed its doors in 2004 because it was insolvent as a result of too many bad loans to politically connected borrowers.

At the meeting of the Ad Hoc Committee on Job Creation, the representatives of the City Attorney, the City Administrative Officer (“CAO”), and the Chief Legislative Analyst (“CLA”) were not prepared to spoon feed the three clueless members of the Committee, especially when it came to the importance of credit quality.

Importantly, the Bank of Los Angeles needs to be profitable so that it can establish strong reserves against future loan losses and increase its capital base to support a growing loan portfolio.

There is also the question of how to capitalize the Bank of Los Angeles, a risky venture considering it is a startup venture that involves considerable leverage.

Ellen Brown of the Public Banking Institute, an advocate for publicly owned banks, suggested that the City’s pension plans pony up $500 million in capital for the Bank of Los Angeles.  But this related party investment in a risky startup venture does not pass the smell test.  It will raise issues with bank regulators and pension watchdogs and will expose the trustees of the City’s two pension plans (and possibly our elected officials) to personal liability.

The proponents of the Bank of Los Angeles point to the one publicly owned bank in the country, the Bank of North Dakota.  It is an extremely profitable, well capitalized, growing, wholesale bank (no branches, no ATMs, no retail deposits) that has been in business for almost 100 years.  And if the hayseeds in North Dakota can operate a highly profitable bank, the light bulbs in Los Angeles can certainly do the same.

Unlike the LACDB which was playing with federal government’s money, the Bank of Los Angeles will be rolling the dice on this risky startup venture with our money that we cannot afford to lose.

In other words, don’t drink the Kool Aid.  Do your homework.  Hire experts and excellent management. Take your time.  After all, this is our money.  Don’t blow it.