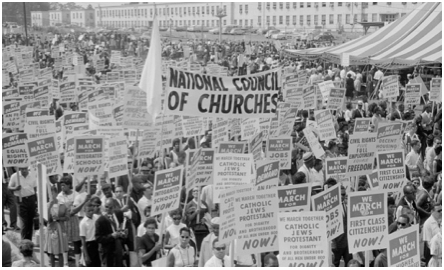 INDEPENDENCE DAY THROUGH A DIFFERENT LENS--With a long holiday weekend lined up for the 4th of July most people are probably worried about having enough food for the barbeque, or hoping that their get-togethers aren’t too political. Facebook will be littered with messages of freedom, and assorted dissents. I post a link to Frederick Douglass’ 1852 speech "What to the Slave Is the 4th of July?" to mark the occasion most years. For many people this year will be different and it is important that we pay attention. The freedoms marked by the day are under attack. The Declaration of Independence declares:

“We hold these truths to be self-evident, that all men are created equal, that they are endowed by their Creator with certain unalienable Rights, that among these are Life, Liberty and the pursuit of Happiness.”

It is important to consider the choice of reflecting these specific values. For example, in Canada they say: "peace, order, and good government" and in France: "liberty, equality, fraternity." “Life, Liberty, and the pursuit of Happiness” have been specifically chosen to represent the United States of America from its inception. These values preceded Democratic and Republican parties, the founders were Federalists and Anti-Federalists. The founders focused on guarding against tyranny, both of the majority and by elected rulers. James Madison wrote, “It is of great importance in a republic, not only to guard the society against the oppression of its rulers, but to guard one part of the society against the injustice of the other part.” These days the rulers are tired of the people getting in the way.

It would be easy to highlight the hypocrisy, hence my regular reminder of the role—requirement—of slavery in the formation of the U.S.A. The hardest thing about being an American is being honest about the ugly details of our history; there are no words capable of expressing the disappointment I experienced in finding out there were slave owners in my family tree. The principles are worth aspiring to, even with our historical shortcomings, and they are under attack.

People in some demographic groups will be much more worried if they are pulled over while speeding on their way to store to pick up a missing ingredient or some briquettes for the grill than people in other groups. Some people will be working for a minimum wage that isn’t a living wage while other people are enjoying the holiday. Others will be unable to enjoy the holiday because of the recent loss of a loved one who was killed in a hate crime; that sadness is the same regardless of religious belief, sexual orientation, or skin color. My sadness is that it is frequently people who look a lot like me targeting people who look differently than I do, and white males are frequently the ones who tell me to stop being “so political.”

We have a President targeting and bullying different groups. Ignoring the fact that white males commit nearly all of the terrorism on U.S. soil. Current policies break families apart and put them on hold. We have the National Rifle Association making sure that domestic terrorists never have a problem accessing instruments of death. But, forget the fact they were silent when an African American male was killed by a police officer while lawfully carrying. The NRA now advertises a response to lawful protest, “the only way we stop this, the only we save our country and our freedom, is to fight this violence of lies with the clenched fist of truth.” I guess they are happy that I’ll teach with guns in my classroom this fall (see Georgia HB 280, in effect July 1st, 2017). Forget the words of former Justice Antonin Scalia, “[N]othing in our opinion should be taken to cast doubt on longstanding prohibitions on the possession of firearms by felons and the mentally ill, or laws forbidding the carrying of firearms in sensitive places such as schools and government buildings...”

There may be as many as 22 or 23 million Americans losing health insurance; they might have a reason to protest. Almost 66 million Americans voted for losing candidate Hillary Clinton, she had 3 million votes more than Donald Trump. Trump is now a president without a mandate, the majority of Americans did not want what he ran on, and he has historically low approval numbers. Nonviolent protest is a great response to his unwanted agenda. These are matters of life and liberty. New England Journal of Medicine reporting on the impact healthcare repeal effort would have says about increasing deaths ascribable to the Republican ‘healthcare’ plan: “Estimates of this inherently murky statistic vary, but the range is from about 28,000 to nearly 100,000 a year.” A monumental loss of life!

“The right of the people peaceably to assemble, and to petition the Government for a redress of grievances” is a liberty guarded in the First Amendment of the Bill of Rights.

The March on Washington for Jobs and Freedom — August 28, 1963, an anti-Vietnam War protest in Washington DC — November 15, 1969, and the Anti-Nuclear March in New York City’s Central Park — June 12, 1982 were all events where hundreds of thousands of Americans made a statement about policy. No statements of “clenched fists” were made by the NRA in those times. There are currently (Republican) efforts to restrict the right to protest in 18 states. This is not what you’d expect from the nation of the Boston Tea Party, which, I’ll remind you, did destroy private property (342 chests of Tea). These laws aim to restrict the power of protest, because it works.

The reason we must keep the 4th of July political is because freedom and equality are political. The success of the civil rights movement in the 60’s required actions like marches to Selma. These laws would prevent the exercise of freedoms in such marches, in Indiana they would give law enforcement the power to shut down highway protests by “any means necessary.” The political discussion and protest are required because the public isn’t getting what it wants. The fact that, “only 12% of Americans support the Senate Republican health care plan” (USA TODAY/Suffolk University Poll) is important and it is a responsibility of citizens to be active and well informed. The 4th of July is not a day for ignoring tyranny, and this 4th efforts are everywhere and they are undeniable. More fundamentally we have to be political because we need life, liberty, and the pursuit of happiness for all Americans.

(Wim Laven teaches courses in political science and conflict resolution at Kennesaw State University in Georgia, and is on the Governing Council of the International Peace Research Association. Distributed by Common Dreams.)  Graphic credit:  Marchers, signs, and tent at the March on Washington, 1963 (photo/Marion Trikosko/cc) Prepped for CityWatch by Linda Abrams.