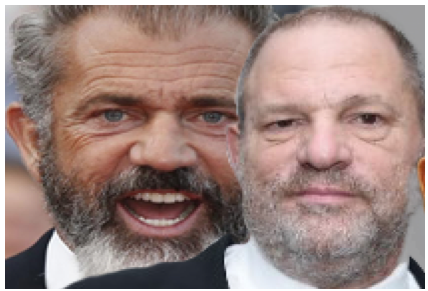 CORRUPTION WATCH-Suppose Los Angeles Democrats had the choice for U.S. Senator between a Democrat candidate with a history of sexual dalliances with teenage girls and a White Supremacist.  For whom would they vote?

It is one thing to bring down the gross Harvey Weinstein. Not only is Weinstein physically repulsive, but he also is an “asshole” to quote Matt Damon. But then, a White Supremacist has not risen up to take his place unless one counts Mel Gibson with his Hacksaw Ridge and now with his co-starring role in Daddy’s Home 2.

If Hollywood can promote an anti-Semite’s movie as a good Christian family movie for Jesus’ birthday, why can’t Alabama elect Roy Moore? Roy Moore’s sexual indiscretions go back 40 years, yet Mel Gibson’s are basically current. His DUI arrest was in 2006, and as far as we know, he is still as bigoted as ever. But, here’s the important part: His 2016 movie, Hacksaw Ridge, made money (worldwide total of $175.3 million, against a production budget of $40 million). In America and especially in Los Angeles, making money erases all sins.

After the criminals on Wall Street crashed the entire economy in 2008 with their massive fraudulent securitization of defective mortgages, President Obama developed the Too Important to Prosecute Doctrine as a companion to his giving trillions of dollars to the Wall Street criminals. While Roy Moore is a religious freak who hates gays and denies that the Supreme Court has the right to interpret the U.S. Constitution if the High Court’s interpretation disagrees with his, Roy Moore has not done anything as harmful as crashing the world economy. After all, Roy Moore seeks to join the U.S. Senate where women are shunned for speaking. “Nevertheless, she persisted,” explained Senate leader, Mitch McConnell, in hushing Sen. Elizabeth Warren. He had told the little lady to be quiet and she ignored him!

Where is all this sexual predator furor leading? It is just now becoming clear: Nowhere! It will be sound and fury while signifying nothing. America is a land of predators and we have no intention of changing our ways. For a while it was great fun to turn against some “assholes,” but now the powerful realize that they all are in danger.

A predatory nation, where the 1% has been systematically stealing from everyone else, cannot allow the finger pointing to continue. One way or another almost everyone is complicit – almost everyone has benefitted from the predatory abuse of others. Not only do we have the historic genocide of the Native Americans, but we still have judicially approved bigotry. According to the California Supreme Court, article VI, Section 10 of the state constitution allows judges to exclude Jews and others “who refuse Jesus Christ” from hearings and to ignore and alter testimony and documents from infidels.

The City of LA’s allowing the destruction of 22,484 rent-controlled units making thousands of people homeless while giving billions of tax dollars to billionaires is the mark of a predatory society. And while those thousands of poor people were being thrown on the streets to suffer and die, the City was cutting the paramedic budget knowing that the cuts would result in needless death. See June 2013 LA County Grand Jury Report. Did Jackie Lacey follow up on any of these needless deaths – based on a report by her own office? Don’t make me laugh. What happened to her investigation of the $60,000 given to Garcetti’s charity by Sea Breeze developer Samuel Leung or the $125,000 pay-off by developer Rick Caruso and his buddies for a $200,000 “contribution” to Garcetti’s Measure M?

Although the courts noted in January 2014, that the City used lies and myths to subvert the law, Judge Fruin comes along in 2017 and exonerates Garcetti and the City Council by ruling its lies, deceit and criminal vote trading are non-justiciable, i.e. above the law. We now live under the banner “Predators uber alles.”