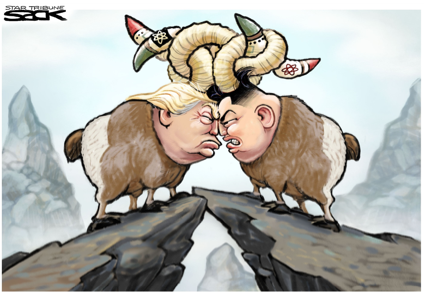 ANALYSIS--“It was the wrong speech, at the wrong time, to the wrong audience,” Swedish foreign Minister Margot Wallström expressed about what global and U.S. audiences helplessly had to endure during President Donald Trump’s September 19, 2017 address to the United Nations General Assembly. President Trump acted like a bully, but unaware that he showed up at the wrong playground.

The United Nations was founded after World War II “to save succeeding generations from the scourge of war, which twice in our lifetime has brought untold sorrow to mankind…”.

There is no doubt that the United Nations has never fully reached its potential, and without fundamental reform it never will. The spirit, however, is laid out clearly in the UN Charter. While being center stage at the United Nations General Assembly, an assembly where global collaboration is emphasized, Trump bragged about the United States, fueled division, and threatened other nations.

The threat to “totally destroy North Korea” is beyond any form of acceptability, regardless if it is rhetorical or real. It is therefore important to challenge Trump’s own words. We must not forget that he is the Commander-in-Chief with the authority to launch nuclear weapons.

Trump: “Rogue regimes represented in this body not only support terror but threaten other nations and their own people with the most destructive weapons known to humanity.” The U.S. has 6,800 nuclear weapons with the capacity to destroy human life on the planet many times over. The U.S. is also the only country who has ever used them.

Trump: “The United States has great strength and patience, but if it is forced to defend itself or its allies, we will have no choice but to totally destroy North Korea.” This is a threat of committing mass atrocities against approximately 25 million people and most certainly killing millions more in South Korea or Japan which would bear the consequences of such a war. A threat that can only be realized by launching a nuclear war. This needs to sink in.

U.S. President Donald Trump used his United Nations General Assembly speech to threaten nuclear war against a sovereign country. It is also a direct violation of the UN Charter, which reads that “all Members shall refrain in their international relations from the threat or use of force against the territorial integrity or political independence of any state.”

The notion of having “no choice” other than taking 25 million human lives is the most troubling element of the entire address. No choice? How about starting real negotiations without pre-conditions?

How about engaging North Korea on multiple levels of diplomacy (direct and indirect) and initiate citizen-diplomacy to humanize “the other” 25 million North Koreans.

How about moving away from tit-for-tat playground mentality toward problem-solving approaches through recognition and respect, even in an adversarial relationship?

How about identifying and referencing other successful difficult diplomatic breakthroughs (hint: Iran Deal)?

Wouldn’t a self-declared Master-of-the-Deal always be aware of and one the search for choices to prevent a bad outcome? 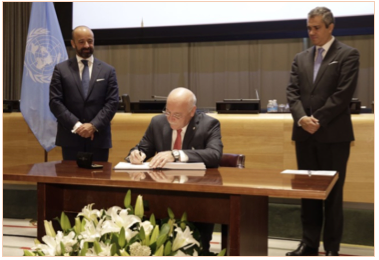 It is without question that North  Korea’s nuclear ambitions, testing, and rhetoric are troubling and must not go unanswered. It is also clear that the North Korean people are suffering under the Kim Jong Un regime. However, we are witnessing a very dangerous pattern of conflict escalation by two nuclear armed leaders whose legitimate power rests upon their strong-man talk and actions. In this pattern, a move by one must be answered with a stronger countermove by the other. This is unacceptable to Americans, North Koreans and humanity.

The biggest stick on Trump’s playground must never be used. Leaders and citizens of all countries¬ – with or without nuclear weapons – need to rise to the occasion to see the real and present danger of these weapons. How fitting that one day after Trump’s speech, the Treaty on the Prohibition of Nuclear Weapons was opened for signature.

Citizens, civil society organizations and leaders now need to throw their force behind the treaty. Clearly, Donald Trump was a bully at the wrong playground, sidelined except for his unwelcome destructive potential, while the smart ones take real steps to give us hope that humanity moves in the right direction and avoids nuclear catastrophe.

(Patrick. T. Hiller, Ph.D., syndicated by PeaceVoice, is a Conflict Transformation scholar, professor, served on the Governing Council of the International Peace Research Association (2012-2016), member of the Peace and Security Funders Group, and Director of the War Prevention Initiative of the Jubitz Family Foundation.)