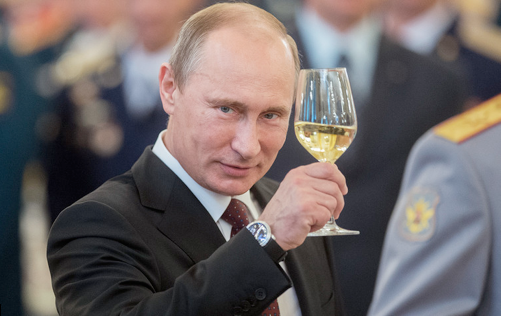 GUEST WORDS—(This Insider look at Vladimir Putin was made available to CityWatch through the auspices of our Washington DC Bureau Chief, Sara Corcoran.)  When I look at coverage of Vladimir Putin in the American media, I’m regularly shocked and puzzled by what I see.  Russia’s authoritarian, mobbed-up president is commonly portrayed as an authoritarian superman: Putin the uber-politician; Putin, the commanding figure of power and puissance on the world stage; Putin, the Machiavellian master schemer whose tentacles stretch from the Kremlin to the Trump White House, where he has skillfully managed to collude with, if not the president, then almost certainly those around him.

I have known Vladimir Putin since the early 1990s. As a businessman in St. Petersburg in the early and mid-1990s I spent scores of hours with Volodya, as he was known in those days, sitting over beer and Bavarian food, conversing in the almost-perfect German he likes to speak.  He signed the registration papers for my security company and personally registered them. He advised and counseled me.  He helped me expand my business. And at his request, I built, trained, and equipped St. Petersburg’s first Western-style KGB SWAT team.

In 1996, when my company and the headquarters in which I’d invested almost $1 million in renovations was expropriated by then president Boris Yeltsin, Putin shrugged and told me there was nothing to do to help.  Since then, I’ve watched him metamorphose from a minor bureaucrat to the twice-elected—and very soon to be thrice-elected--president of Russia. And I can tell you that the Putin you read about in the American press is nothing like the Putin I knew—and know.

Surprisingly, the Putin I know is in many ways similar to the current U.S. president.  Like Mr. Trump, Volodya makes many of his decisions based on snap judgements, not long deliberations. Like Mr. Trump he holds grudges and hates—really hates--being made fun of.  And like Mr. Trump Volodya dislikes long, complicated briefings and finds reading policy papers an onerous task. The Putin I know lives and governs day-to-day, reacting to events as opposed to proactively developing and executing a long-term strategy.

But in other ways, the Putin I know is very, very different from the gullible Mr. Trump.  As a former intelligence officer, he understands how to use disinformation—Deza--and lies—Vranyo—and compromise—Kompromat‑‑to create chaos both in the West and at home. The Putin I know thrives on chaos.

The so-called Trump Dossier, for example, is exactly the kind of chaos-inducing Deza and Vranyo-based operation at which Putin’s KGB—and now his FSB and SVR—are so adept.  Hooked by the Dossier’s over-the-top sensationalism, the Western press swallowed virtually whole a document that had been gathered not by the painstaking recruitment and debriefing of agents face to face, but by remote control.  Its English spy author never went to Moscow.  Instead he interviewed Russians and other contacts who it is claimed spoke to their own contacts inside Russia to gather Kompromat on Trump.  Intelligence-gathering by telephone?

Who woulda thunk it.

Was no one in the American press suspicious?  Obviously not.  Because no pundit I watched or read ever pointed out that so far as Volodya was concerned, it didn’t matter whether the information in the Dossier was true or it wasn’t.  Nor did the Putin I know give a damn about the veracity of all those Wiki-Leaked Hillary Clinton emails.   All that mattered to him was creating a tornado of chaotic disruption to the 2016 American presidential election cycle.

The American media also all too reticent to tell its audiences that Putin’s Russia is not now and never will be our friend. Volodya’s Russia wants to divide and to destroy our democracies, our way of life, our rule of law and our freedoms.  To that end the Putin’s Kremlin—notably the UdPRF, the presidential administration overseeing all the property of the Russian Federation whose black budget is in the billions of rubles and which controls not only all the perks dispensed to obedient Kremlin apparatchiks, but also the very sort of covert action programs that result in the Trump dossier.  It’s a sure fact that under the Putin I know UdPRF and the KGB's successor organizations will continue to practice Deza, Vranyo, and Kompromat operations against the United States and the West.  Of course they will: it’s in the Russian DNA. Just as it is embedded in the DNA of the Putin I know.

And finally, it pains me to say the American Media ignores the fact that if you look closely, Putin’s actually running scared these days.  His election may be guaranteed; his future is anything but.  He’s actually in a pretty desperate situation.

Why?  Because Volodya has no one watching his back.  His former bosses, St. Petersburg mayor Anatoly Sobchak and Russian president Boris Yeltsin hired and promoted Putin because of his loyalty to them.  The Putin I know didn’t take bribes.  But he allowed his superiors to accumulate huge wealth and then he shielded them from indictment.  For Sobchak he built a protective wall around the mayor even as Sobchak cached millions of dollars in Paris.  Later, as head of Yeltsin’s FSB, Putin quashed the investigation of the Yeltsin family by Russian Prosecutor General Yuri Skuratov by vouching for the authenticity of a fuzzy video of a man said to be Skuratov in bed with a prostitute.

But the Putin I know has no Putin watching his back.  He’s all alone.  There are no Presidential Decrees in his future.  Which means that while he may have indeed stashed away that long-rumored $140 billion fortune it is most likely held by friends, associates, and even some of the criminals Putin has made filthy rich.  There are no Putin fingerprints on that money—not one.

So, my question is: when Volodya finally leaves power, will those filthy-rich friends and associates give him back any of those billion$?

Somehow, I don’t think so.  Sharing’s not the Russian way.

And that’s when the Putin I know will finally be in real deep … something.

(Franz J. Sedelmayer is a German entrepreneur, security expert, and lecturer, and the author of “Welcome to Putingrad: The Incredible Story of the Only Man to Collect Money from Vladimir Putin.”)