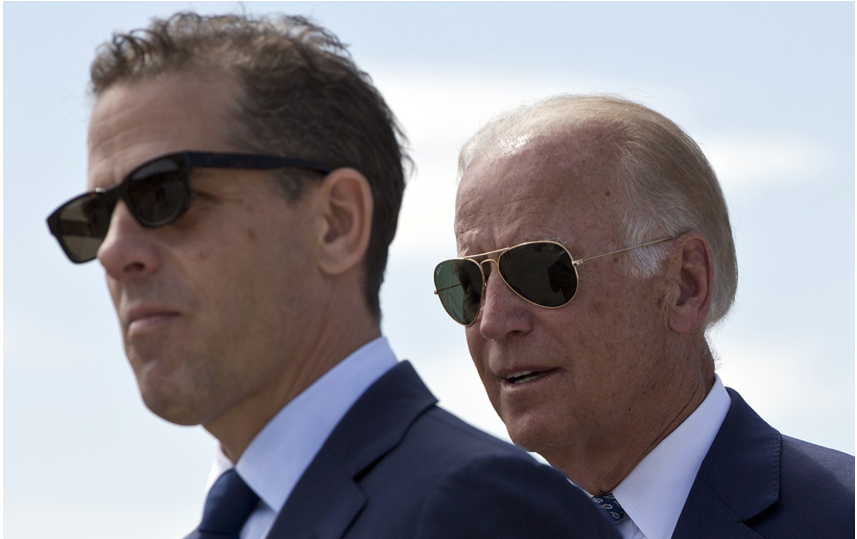 DC DISPATCH-Amidst Trump campaign slogans calling for Hunter Biden’s location, one thing is clear. . .we all know where Hunter is -- Los Angeles -- and hope he is enjoying his new life in Citywatch’s backyard.

But in wishing him well, we would be remiss if we did not mention the serious threat he presents to his father’s presidential prospects. Hunter Biden (photo above, left) is an unpredictable tracking cookie who follows his father’s campaign, displacing bytes of data wherever he travels. Furthermore, he appears to be a liability that the campaign or its leader has strongly overlooked in assessing Biden’s chances of winning the presidency. Absent a credible strategy to block Hunter’s cookie trail, he will continue to diminish the fungibility of his father’s candidacy -- stonewalling or calling members of the audience on the campaign trail “damn liars” will just not work.

Let me start by saying that I admire Joe Biden as a candidate and public servant. This courageous American has dedicated his entire life to the American people both domestically and abroad. He has endured unimaginable tragedies which makes his ability to connect with fellow survivors genuine. I do not question his patriotism nor his frontrunner status in national and swing-state polling, but I am left feeling very uncomfortable that his former partner in the Executive Branch has failed to endorse him.

According to some media reports, Obama is not convinced that Biden has what it takes to clinch the nomination and beat Donald Trump. Absent the overt and covert blessing of Obama, we are left to infer that he knows something about the former Vice President that the general public does not. What can it be? His health? His age? Or some secret information that he’s gleaned from classified intelligence reports?

Obama, during the last year of his presidency, had the insider track when it came to monitoring the impact Donald Trump was having on the U.S. elections -- he may have underestimated the impact, but he knew that the Russians were working to harm Hillary Clinton and to push for Donald Trump. In hindsight, I’m sure he feels his administration should have acted more forcefully as a former member of his cabinet was eviscerated by a very successful Putin-led assault. Obama is likely flustered at the prospect of witnessing another member of his former cabinet suffer the same tortious interference and I suspect he thinks that possibility is very real.

As the activist, silent investor in the Democratic party, Obama knows the assets and liabilities of each candidate on the debate stage. When the former president speaks publicly about the 2020 contest, it has been to caution the party against going too far left. So, when he was reported to be telling top democratic donors that “Elizabeth Warren is a capable candidate,” it seems as if he was steering wealthy donors to look elsewhere -- a definite slight to Biden, who served him loyally for eight years.

While out on the campaign trail, Joe Biden has failed to competently address questions and concerns related to his son. While many candidates have previously enjoyed the rule that family is off-limits, in the age of Trump and his tweets, this is no more, and candidates must adapt. Nothing is off-limits and everything is on the table, including Hunter on a platter.

Hunter Biden's ongoing child support and paternity case illustrate the type of prey that Trump, a known carnivore, will pounce on, feasting on every savory morsel of output. If Trump had known that Hunter would risk gravely harming his father by engaging in an open-source civil matter, our President would not have needed to risk abuse of power and obstruction of Congress by mining for dirt in Ukraine. Trump could simply have waited for Lunden Roberts, Biden's baby momma, to produce a trove of public and humiliating documents.

This case cried for a quiet settlement, but for some reason, Hunter first refused to acknowledge paternity and then to make steady payments to the child he knew he had helped produce. By his arrogant conduct, Hunter managed to anger the judge who has denied a protective order in part and compelled him to appear for a deposition in Arkansas in early 2020. Hunter will now be forced to supply five years of financial documents (instead of three) which include his time as a Burisma board member, his work in China and who knows where else he has been conducting business. These will be made public in redacted form.

D & A Investigators, a private, Florida-based company is assisting with the effort of digging up dirt on Hunter and has filed a series of salacious documents with the court.

These allude to a series of criminal investigations that have tenuous links to Hunter at best, but they have become part of the court record. More importantly, it is not known who is footing that bill. In all likelihood, the T-shirt catchphrase, "Where is Hunter" will soon give way to, "I've got the Dirt on Hunter" from the Trump campaign.

Hunter's recent claims of poverty, rebuked by the purchase of an upscale home in the Hollywood Hills of Los Angeles, does not help his credibility. And though he lives far from Little Rock, it is clear that Hunter Biden will have to deal with this now very public proceeding and discovery process. It would have been the more prudent move to shield his father, his 18-month-year-old infant, and his newly pregnant wife, Melissa Cohen Biden, the pain of a public display by reaching an out of court settlement.

In the current political environment, where dirt and kompromat have more value than the actual record, the younger Mr. Biden will continue to be an onus to his father’s campaign. Trump has demonstrated time and again that he will risk all to mine for valuable “oppo" data. Since it will now be available in plentiful supply in Little Rock, Trump won't have to rely on Ukrainian cutouts. He will soon learn the utility of having an open legal proceeding out there for the press to dissect. The current Commander in Chief will benefit greatly from the subpoena of Hunter's financial records, emails, and other communications and he won't even have to show a trace of the clumsy machinations he and Giuliani used in Ukraine.

The Biden family must address this unresolved liability head-on even if it involves acknowledging wrongdoing and errors of judgment. Candidate Biden cannot plead the loving father, asking no questions of his errant son. Hunter can no longer claim his finances are a private matter. There are simply too many areas of questionable conduct -- from allegations of shady business dealings and child support obligations. Both Bidens need to sit down together for a lengthy, no-holds-barred interview and explain to the American people how they erred in the past and how they both intend to behave in the future. If Biden is to be elected President, it is the only way to take a step back from the precipice. If successful, they will be able to assuage voters' fears and blunt the onslaught of oppo dirt that Trump and his campaign will keep hurling their way.

(Sara Corcoran writes DC Dispatch and covers the nation’s capital from Washington for CityWatch. She is the Publisher of the California and National Courts Monitor and contributes to Daily Kos and other important news publications.) Photo: Visar Kryeziu/AP. Prepped for CityWatch by Linda Abrams.