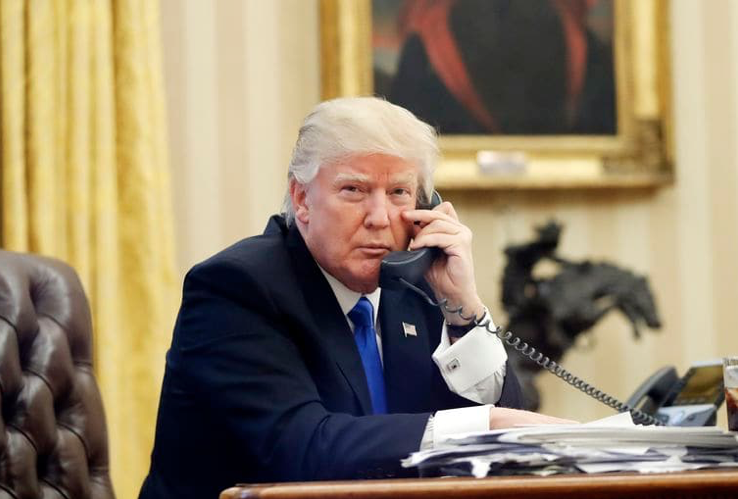 DC DISPATCH--It used to be standard practice to record conversations between our President and foreign leaders.

Many Presidents, including Donald Trump, loathe the process of talking to foreign dignitaries from the Oval Office as it affords little privacy.  The process of recording and disseminating executive conversations evolved in the 1970s after Nixon was forced to produce 3500 hours of taped conversations to Congress. Once the public was made aware of how that President conducted business in a crude, calculating and dishonest way, Nixon was faced with little choice but to resign or risk the shame of impeachment and conviction.

Subsequent presidents, unwilling to risk Nixon's self-incrimination, adopted an elaborate—but not verbatim—transcription system, designed to afford the conversing world leaders a modicum of privacy while ensuring the Presidential records would be preserved for posterity. In a recent interview with John Williams, a WGN radio host, Larry Pfeiffer, clarified how the system works. As a seasoned intelligence officer and former Senior Director of the Situation Room (also commonly called the Sit Room), Mr. Pfeiffer documented many of these types of phone calls. According to Pfeiffer, the Situation Room, is the 24/7 response/watch operation that supports the President, Vice President, National Security Advisor, and the other most senior White House officials. These parties are alerted to any world or domestic event deemed significant.

According to Pfeiffer, this could include anything from foreign military exercises to wildfires in California.  The occupants of the Situation Room also set up, arrange, and monitor all calls between foreign leaders and the President.  Normally, a briefing book with background information and talking points is prepared in advance by the National Security Staff before the call. Once connected, duty officers wear a headset and recite the contents of the calls from speech to text software. Other officers with expertise on the call’s subject matter also take notes. Once completed, the working script goes to the National Security Council (NSC) Directorate responsible for the relevant region of the world (such as the Senior Director for Europe and Russia). The NSC, in turn, creates a memorandum and depending on the nature of the conversation topic assigns an appropriate classification.

So, on a fateful morning at 903 am the note-takers would have started the task of transcribing the very troubling conversation between the Presidents of the US and Ukraine. Zelensky panders to Trump boasting how he is “draining the Ukrainian swamp.”  Zelensky also mentioned his intent to purchase more Javelin anti-tank missiles from the United States. It would be the next ten words that could mark a turning point in this Presidency. ‘I would like you to do us a favor, though'. Trump continued his demand by saying that he wanted the Ukrainian President to work with his Attorney General William Barr and Rudy Giuliani to look into Joe Biden and his son Hunter. What followed--the whistleblower, the commencement of an impeachment inquiry, and multiple witnesses defying Executive Orders to not testify when served with Subpoenas from the House Intelligence Committee--was nothing short of swift and severe.

A “partial” transcript of Donald Trump’s conversation with Ukrainian President Zelensky was released two weeks ago. While political pundits argue about whether Trump’s conduct on the call was illegal or just plain tawdry, we are left perplexed by the decision of NSC counsel to immediately put the transcript on the “Codeword” classified server after the call was completed. This decision is typically done ahead of time and is normally reserved for matters of the highest level of national security--not to obscure wrongdoing or inappropriate conduct.

President Trump authorized the release of the transcript and its declassification despite heated objections from most of his advisors and lawyers. Trump was convinced that the public would see the limited transcript as a “perfect” call with no evidence of a “quid pro quo”—the withholding of Congressionally-appropriated military aid and a White House meeting in exchange for 1) Ukraine investigating the California-based cybersecurity firm CrowdStrike which had linked Russia to the hacking of DNC emails in 2016   and 2) reopening an investigation into Burisma (the oil and gas company where Hunter Biden had served on the board).

Trump reasoned, with extraordinary hubris, that the release of the transcript would negate the whistleblower’s memorandum and that he could dupe his base into believing that he had put “no pressure” on Zelensky.  By stonewalling Congress and ignoring subpoenas to appear or produce documents, the President believed he could contain the message and bend the truth.

The whistleblower’s statement, while accurate, has become almost irrelevant because the content of the transcript is so damning to the President. Its release was a terrible miscalculation and a dangerous precedent as the public starts to question Trump’s other relationships with heads of state. What did he say to Putin in Helsinki? What did he say about Biden in his call with Premier Xi? What did he say to Erdogan of Turkey before pulling US troops from Syria and abandoning the Kurds? Why isn’t the public entitled to full transparency on these calls to determine what interests are being served by Trump’s calls?

As more U.S. officials testify before Congress in defiance of White House objections, the “quid pro quo” elements of the July 25th call are more fully fleshed out and the public will see that the President used the awesome power of his office not to advance national security but to further a shadow diplomacy, executed by Rudy Giuliani and his Russian agents, Lev Parnas and Igor Fruman, exclusively for his own benefit to gain an advantage in the 2020 election. Let’s hope the impeachment inquiry fully airs this misapplication of Presidential authority.

(Sara Corcoran writes DC Dispatch and covers the nation’s capital from Washington for CityWatch. She is the Publisher of the California and National Courts Monitor and contributes to Daily Koz, The Frontier Post in Pakistan and other important news publications.)