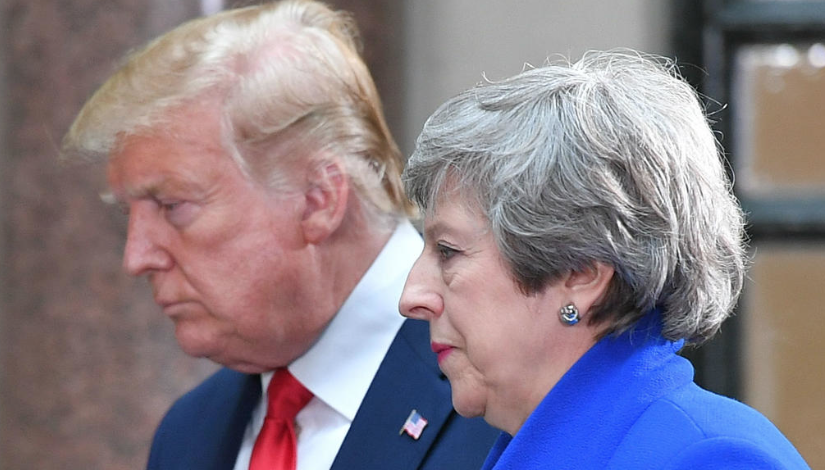 DC DISPATCH--Ambassadors are tasked with pursuing agendas aligned with their national interests and achieving them by cajoling behind the scenes.

Being picked to run a diplomatic mission to the United States is one of the most prestigious career achievements any member of the diplomatic corps can aspire to. Only those who can identify, collect, and disseminate current events and intelligence with wit and wisdom in equal measure need apply.

According to Winston Churchill, “Diplomacy is the ability to tell someone to go to hell in such a way that they look forward to the trip." When Donald Trump referred to his relationship with former PM Theresa May (photo above) as "the highest level of special", he was telling her to go to hell, but in a direct, very American way. 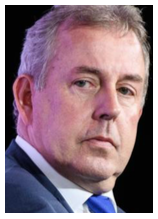 By all accounts, Sir Nigel Kim Darroch (photo left) was a very charming and capable diplomat. And while being charming is a factor, an ambassador is also tasked with collecting information and reporting on key issues affecting his homeland including his perspectives and observations.  Sir Kim Darroch is said to have warned, "We don't believe (Trump's) administration is going to become substantially more normal; less dysfunctional; less unpredictable; less faction driven; less diplomatically clumsy and inept." When Darroch described internal conflicts in the Administration as "knife fights" and warned ministers that Trump's "career could end in disgrace," his comments mirror what most other diplomats say. It also mimics what cable news shows broadcast daily, absent Fox News. Any rational person looking at the high turnover rate of Trump’s cabinet secretaries could reach a similar conclusion.

Steve Edginton, a 19-year-old British “journalist", with established ties to the Brexit movement, published a self-serving declaration supporting his actions in publishing the diplomatic cables.  He warned the readers of the Daily Mail of an assault on British press freedom. If he meant to deter a prosecution, I think he may have increased the likelihood of it.  Under the UK’s Official Secrets Act, unlike its American cousin, the U.S. Espionage Act, there is no special protection for First Amendment freedom of speech. As a subject of her Majesty's Crown, it is against the law to publish an official secret for both the leaker and the journalist.  Edginton should have been aware of the risks of his actions, given the fact that he coordinated his leak with an experienced journalist, Isabel Oakeshott.

Kim's tenure as the British Ambassador to the United States was ending in a few weeks. Surely, the cable would have no impact on his career once he left Washington DC, so why not wait to release it until then? His term was set to finish at the end of July with his replacement probably being known as much as a year earlier.  Edginton claimed that since the leak didn't involve national security, there was no harm in its release.  However, he ended someone’s honorable career and the timing suggests otherwise, particularly in light of Edginton’s political affiliations.

In the United States, where the Freedom of Press protections are a matter of constitutional law, the press has often played an important role in holding the government accountable. The release of the Pentagon Papers is one of its finest examples since it led to the public becoming aware of US government activities in Vietnam and acted as a catalyst to ending the war. In a landmark 1971 decision related to the 7,000 pages of classified information leaked in the “Pentagon Papers”, New York Times Co. vs. United States, the Supreme Court ruled that national security did not provide a blanket justification to suspend publication of damaging information. The leaker, Daniel Ellsberg, was charged under the Espionage Act but the case was thrown out due to misconduct by the prosecution. The NYT journalist, Neil Sheehan, was not charged.

However, there are recent instances/examples of people—such as Julian Assange and Roger Stone—who label themselves as “journalists” to seek the protection of the First Amendment. Both have tried to manipulate the scope of its definition to benefit from its protections. Julian Assange’s actions at WikiLeaks in the 2016 U.S. election were designed to influence an outcome to the benefit of one party (Donald Trump) against another (Hillary Clinton). This behavior does not meet the standard of disseminating information for the benefit of the public.  Indeed, Assange was recently charged with releasing classified cables, and documents, (though not stolen emails), as an artery of Russian Intelligence. Roger Stone was similarly indicted, although for lying to Congress and obstructing the government’s Russia investigation. Hiding behind the First Amendment and acting as proxies for hidden political agendas should not be protected or condoned. Real journalists should expose this conduct wherever they find it.

Selectively leaking information that suits a political agenda is not objective journalism but manipulation or malice. While the U.S. government has broad authority to identify, collect, and disseminate intelligence, our press also has broad authority to disseminate vital information. As arbiters of what the public "needs to know," the information in question should have longevity, expose fraud, corruption, or waste and not implode a diplomat’s career a fortnight before retirement. Edginton failed this test and will likely face recrimination.

Although the public has a “right to know”, this principle does not apply to all things at all times. Indeed, this is why by law our government has a Freedom of Information Act (FOIA), whereby any citizen can request to see information from any executive branch government agency on any topic without cost.  If the requested information can’t be withheld based on a specific list of reasons, it will be released.   Ask any intelligence officer with jurisdiction over intelligence (FOIA) requests and they'll lament the nature of the requests that have passed their desks. Typically, the government will deny requests on the grounds such as protecting national security, not revealing trade secrets or confidential financial information, or protecting ongoing legal cases. However, over time, some of this information will eventually be released, as a balancing test between the government’s interest in protecting information and the public’s right to know shifts.

Classified or not, there is just no need to know the confidential work product of a government "mandarin" as Edginton so brashly did. Diplomats of any country simply cannot effectively conduct diplomacy if they—or the sources they are talking to—are constantly wondering whether their conversations, commentaries, and policy recommendations are going to show up in the newspapers the next day.  A sieve known to be leaky will collect no water.

On the eve of Boris Johnson's swearing-in, we fondly remember the politician who put the hard work into making his country's relationship with the US so special. Without the legacy of Churchill (whose mother, lest we forget, was born in Brooklyn), there would be nothing special about it. American-born Prime Minister Johnson (also, as it happens, born in New York City) has an opportunity to calm the currents roiling the cables between our pond and bring diplomacy back into the Foreign and Commonwealth Office . Let's also hope that includes prosecution of political operatives claiming to be journalists.

(Sara Corcoran writes DC Dispatch and covers the nation’s capital for CityWatch. She is the Publisher of the California and National Courts Monitor and contributes to Daily Koz, The Frontier Post in Pakistan and other important news publications.)