GUEST COMMENTARY - The LAPD has a double standard when addressing disciplinary complaints on Command Staff Members vs. rank-and-file members.

It has been well established within the Los Angeles police department that if a request for an investigation surrounding a complaint on a sworn member of LAPD whose rank is lieutenant or above (Command Staff) the outcome may be far more favorable than that of a Rank and File member.

In fact, when a Command Staff member has many complaints filed against them and a request for an Internal Affairs Investigation has been submitted in writing, or if they are named in a civil law suit it is common practice within LAPD for them to just receive a promotion.

1- A few years back when Debra Mc Carthy oversaw the Internal Affairs Division, she instructed her Investigators to curtail their investigations on former Chief of LAPD Charlie Beck. In fact, on more than one occasion Internal Affairs Investigators have themselves filed lawsuits in which they won their cases and ended up costing taxpayers millions of dollars. By the way, it was rumored that McCarthy was the godmother to Beck's children.

2 - Also, a few years back there was a police pursuit which originated in LAPD’s Hollenbeck area and ended up in LAPD’s Northeast area.  A male was discharging a firearm from within his vehicle towards police officers. The Northeast Watch Commander contacted the Northeast Captain of Patrol and apprised him of what was taking place and that the Swat unit had been notified.  This Captain was also informed that the Patrol Captain from Hollenbeck Division was responding to the Northeast area location.

The Northeast Patrol Captain advised the Watch Commander NOT to call the Northeast Command Captain 111, Jeffrey Bert, since the patrol captain from Hollenbeck Division was responding to the scene.  LAPD Swat ended up in an officers involved fatal shooting incident.  So, when a use of force investigation was initiated, Bert was extremely upset because he had not been notified of the incident hours earlier. Bert contacted the watch commander who stated that he had been advised by the NE Patrol Captain not to call him. The patrol captain denied this.  So, Bert requested an Internal Affairs Investigation on the Watch Commander for failure to follow standard policy and procedures.

Bert was subsequently transferred but for other reasons.  When the new Captain 111 arrived at Northeast Division he told the watch commander that if he could he would fire him.  Why did Captain Art Sandoval make this statement?  Was it because the watch commander dared to say in his lawsuit that two LAPD Captains were lying?   The watch commander won his lawsuit.  As it turns out the Internal Affairs Division Investigators never took the time to review the telephone records.

3- Back on October 7th, 2021, I wrote an article for CityWatch titled ‘LAPD COMMAND STAFF DEFIED LOS ANGELES POLICE CHIEF MOORE DIRECTIVES’ which you can find here.

The Internal Affairs Division claims that they conducted an Investigation.  Check out the attached Note At the end of this piece, where their response letter indicates that I conducted the investigation. Also review the photographs in the city watch article and all can see that no one was wearing a police uniform let alone  body worn cameras.

As far as the comments made by now retired Captain 111 Art Sandoval that he kisses the A--  of then Deputy Chief LaBrada those statements were never addressed by the Internal Affairs Investigators.  Both  Sandoval and LaBrada are part of the Good Ole Boys Club.  As for LaBrada, he is now an Assistant Chief of Police.

4 - Last week there was a male individual who walked into one of our local markets which was full of customers. He was wearing a firearm on his belt around his waist.  When confronted, he stated that he was an off duty South Pasadena police officer. This information turned out to be false.

Information including the physical description of the male suspect, the car and the license plate number was e-mailed to the new Captain of Northeast Division, recently promoted Captain 111 Chris Waters.  As of this date Waters has failed to send a police unit over to the Market to talk with the store manager and get information, review the store's security cameras and file a formal police report.

I sent e-mails to both LAPD Chief Moore and Assistant Chief Robert Moreno about the lack of response from Captain 111 Waters.  I am asking for an investigation.  We shall see what takes place.   Waters has about ten more months on the department before she retires from the LAPD DROP program.

Now if the information that was sent to Captain Waters had been relayed to a RANK and FILE member of the LAPD and they failed to take and or make a police report you can bet they would be facing a DISCIPLINARY action and Investigation by LAPD Internal Affairs Division.

Stay tuned. Part 2 will cover Promotions within LAPD (Not What You Know, But Who You Know).  Part 3 will take a good look at the Major coverups of Internal Affairs Investigations on now retired Commander Cory Palka.  The same Cory Palka now under investigation by our State Attorney General. Palka, during his tenure as Captain 111 of Hollywood Division, provided confidential information a named suspect, a CBS BIG SHOT, of a very serious sexual assault.

In the meantime, here’s the attached letter I referred to. 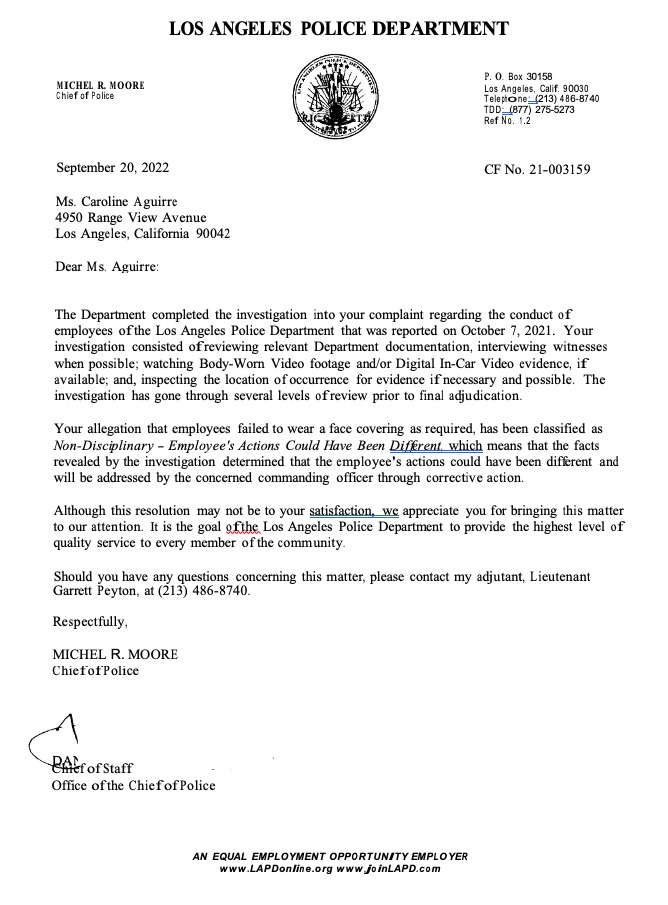