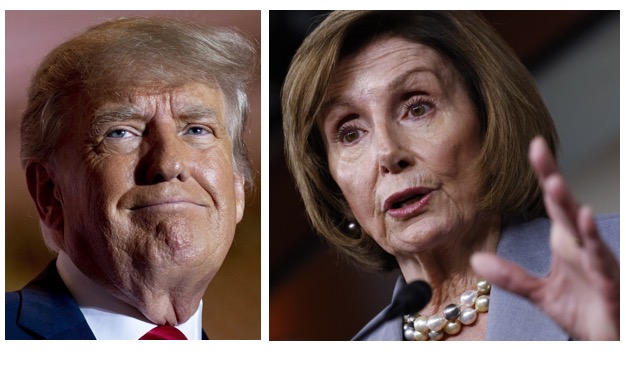 THE VIEW FROM HERE - On December 3, 2022, the mentally challenged Donald Trump wrote on his social media platform Truth Social, "A Massive Fraud of this type and magnitude allows for the termination of all rules, regulations, and articles, even those found in the Constitution."  (Bold added)

Anyone who is surprised that Donald Trump would overturn the Constitution must be brain dead.  On January 6th, he sent an armed mob to The Capitol to murder the vice-president.  I suppose we can take some solace in that his December 3rd statement shows that he recognizes that achieving his goal of being named President requires termination of the rule of law. On the other hand, it shows the depths of Trump’s depravity which the Dem leadership, that is Nancy Pelosi, consistently overlooked. Read Unchecked by Bade & Demirjian to see how Pelosi sabotaged both impeachments

In December 5, 2016 (6 years ago), CityWatch, we pointed out that Trump was mentally ill, but that was a story which the Dems under Nancy Pelosi did not want to hear.  As we wrote then:

“This [Trump’s] punitive approach against people who offend him is the most dangerous aspect of Trump’s personality. People we often lump under the labels of anti-social, psychopathic and sociopathic share these traits: an inability to abide by deeply held social norms and the tendency to attack people who displease them.”

As Trump’s mentally illness became increasingly more dangerous to the Republic, we wrote on October 26, 2017 in CityWatch. ”

“Trump, however, is unique [among US Presidents] – he is seriously mentally ill and he poses a clear and present danger to us all. There can be no Trump Derangement Syndrome because Trump himself is mentally ill, and it takes a fool, a coward or a villain not to see that fact. The problems are far worse than Trump’s multiple Personality Disorders which make him untethered from reality.”

All the Warnings Went Unheeded

The Dems used the Goldwater Doctrine to intimidate psychiatrists and psychologists (who were not technically covered by the Goldwater Doctrine) from mentioning Trump’s personality disorders. My diagnosis for Trump was/is narcissistic (DSM-5 301.81) Histrionic Disorder  (DSM-5 301.50) with paranoid features.  The leader of the Dems, Nancy Pelosi, had determined that it was beneficial for her career to have a lunatic running amok in the GOP.  In addition to squelching talk of Trump’s mental illness, Pelosi twice sabotaged the Senate impeachment trials.  The second time was after he had incited a riot for the purpose to storm the Capitol and murder the vice-president so that Trump could remain President.

Trump is Unique, But Political Myopia is Common

The Dems’ allowing Nancy Pelosi to repeatedly run interference for Trump is more scandalous than Trump’s behavior.  At both impeachments, Pelosi thwarted the introduction of evidence which would have allowed the GOP to convict Trump during the Senate trial.  Pelosi had clear warnings by the law professors.   December 5, 2019, CityWatch, Harvard Law Professor Noah Feldman’s Roadmap to Nancy Pelosi’s Subversion of Impeachment

Who Was the Greater Danger to the Republic - Pelosi or Trump?

The Founding Fathers intentionally created a Republic, where individual inalienable rights were the supreme law, rather than a democracy where the rule of law is subservient to the transitory whim of the voters. Our founding document is the Declaration of Independence and the purpose of the US Constitution is “to secure these rights.”  A government which falls short may be “altered or abolished.”  Although people love to shout, “I know my rights,” they usually know nothing.  When the Alt Right screams about freedom, they ignore the fact that the inalienable right of liberty can be secured only within a context of a government with checks and balances.  Nonetheless, there is a rabid, mentally unbalanced minority at the extreme right which believes that liberty means their right to do anything they want at any time they want including riot, insurrection and assassination. This is Donald Trump’s understanding of Liberty.

Trump is Not Alone In Placing Himself Above the Law

The US Constitution contains complex web of checks and balances which were created by men of great learning with extensive knowledge of political philosophy going back to Socrates, Plato and Aristotle.  After millennia, our nation was founded on John Locke’s revolutionary principle that men could rule themselves without a monarch to tell them what to do.  Men, like monarchs, are flawed creatures when it comes to governance, but the founding fathers had discerned one vital fact: only power checks power. Pleas to morality are futile.  Only power could protect each individual’s inalienable rights, but power could not be located in one place or under the control of one or a few men.  Rather, power had to be distributed among institutions where the people in those institutions had to follow rules which limited their power but also gave them ways to temper the power of other institutions.

The Division of Power -- The Declaration vs the Constitution

The basic power in our nation rests in declaration of each individual’s unalienable rights; “among these are life, liberty and the pursuit of happiness” (bold added). If we do not agree on the Declaration’s inalienable rights being supreme law of our nation, then our country has no foundation.

One does not look to the US Constitution for an exhaustive list of inalienable rights!  Even the Declaration, which declares their existence, states that “life, liberty and pursuit of happiness” are “among these” rights. Any jurist who believes that one must identify an inalienable right in the US to have the federal law’s protection is either a legal ignoramus or a traitor. (That brings us to an existential question for our constitutional republic – what do we do with a patently unconstitutional decision by the US Supreme Court such as Dred Scott v. Sandford (1856) 60 U.S. or Dobbs v. Jackson Women's Health Organization, (2022) No. 19-1392, 597 U.S. ___?  Last time it took a civil war to resolve.)

Voting May or May Not Be an Inalienable Right

One would be hard pressed to exclude voting as one avenue to obtain the “consent of the governed.”  Because the Founding Fathers rejected a democracy, voting is one among a variety of ways to obtain consent.  Just as liberty thrives within the context of constitutional safeguards so too, voting must be embedded within the constitutional frame work.  In addition to voting, consent is also found in the Constitution’s checks and balances.  Consent additional procedures to secure federal inalienable rights, which the 14th Amendment extends to the States.

Impeachment’s Goal Is to Save The Republic

From history and from direct experience, the founding fathers knew the dangers of a tyrant’s seizing control of the government. At the same time, they knew the danger that voters would elect a tyrant.  The express purpose of the impeachment process was to override and nullify the election of a President. Thus, the Constitution sets forth impeachment, a complex process based on a false assumption.  The Founding Fathers assumed that the House and the Senate would be composed of men of integrity who would place the national welfare above personal benefit when the Republic itself was in grave danger.  They had not met Nancy Pelosi.

The impeachment process had its own checks and balances. The House was given the right and power to initiate a President’s removal from office due to “high crimes and misdemeanors.”  Since the House was the larger forum and was popularly elected, it seemed appropriate that removal of a President begin with the House.  This would ensure that a wide section of the nation actually wanted an inquiry and then perhaps an indictment (i.e., the impeachment) when the evidence so warranted.  The trial portion was delegated to the Senate which was presumed to be the more stable and judicious body. While the House which stood for election every two years might rashly impeach the President, the Senate, which had six year terms and was not popularly elected, would weigh the evidence in a more sober fashion.

What Went Wrong with Both of Trump’s Impeachments?

Speaker of the House Nancy Pelosi placed her personal career ahead of her duty to save the Republic.  While wise people take timing into consideration, timing had nothing to do with Pelosi’s repetitive sabotage of both impeachments.  Pelosi would speak of protecting her “frontliners,” i.e., Dem members of the House in purple states, who might be harmed by the impeachment process. Her faux concern for frontliners masked her true motive, that is, her own power. If impeachment were successful or unsuccessful, enough of the purple states might vote GOP in the next election so that Dems would not have the majority in the House and she would not be Speaker.  In contrast, Reps Jerry Nadler (D-NY) and Jamie Raskin (D-MD) were obsessed with protecting the Republic. Nadler who was from New York was familiar with Trump’s unethical and corrupt nature of Trump, whereas Raskin was a Constitutional law scholar who knew the extreme danger Trump’s conduct posed to the Republic.

For Pelosi, The Worst Possible Outcome would be Trump’s Removal

Every Congressperson had a constitutional duty to protect the Republic from a madman.  That duty was above politics.  Pelosi, however, was no fool and she knew that if Trump were to be impeached and removed from office, the GOP would become heroes.  Trump’s removal required the GOP’s cooperation: (1) Conviction in Senate trial, or more likely, (2) Nixonization. In either instance, the nation would see the GOP as the party of integrity as it had gotten rid of Trump.  From Pelosi’s perspective, retaliation by the Alt Right was no inhibition to impeachment; she wanted the GOP to be in disarray. She did not want the GOP’s traditional leadership to be rewarded as saviors.

Twice Pelosi Killed the Senate Trial by Stopping the Evidence

Impeachment is legal and political both of which rest on evidence.  Pelosi knew that the GOP leadership detested Trump with a passion and if the facts turned enough GOP voters against Trump, they would make certain Trump was gone.  Thus, Pelosi used her power in both impeachments to stop the facts, to stop the witnesses, to stop the evidence which was gaining enough momentum to allow the GOP to remove Trump.

The aspect which people fail to admit is that the GOP leadership wanted Trump politically dead.  Because Trump’s presence caused havoc in the GOP, Pelosi wanted Trump to remain political viable.  In both impeachments, Pelosi stopped the evidence, thereby guaranteeing that Trump retained his control over the GOP.