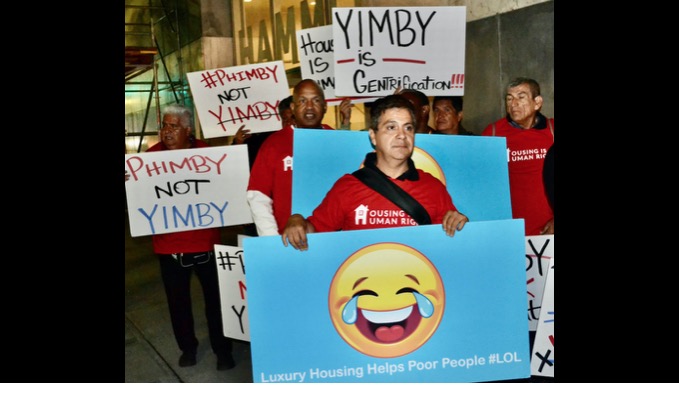 GUEST COMMENTARY - California YIMBY, the land-use lobbying group for Big Tech, continues to hide behind its nonprofit status and refuses to reveal exactly who contributes the big bucks to the organization.

California YIMBY CEO Brian Hanlon has never replied to Housing Is A Human Right’s demand to name the lobbying group’s top 50 contributors, even though its pro-gentrification agenda harms millions of Californians.

In October 2021, Housing Is A Human Right sent a letter to California YIMBY CEO Brian Hanlon. We wrote: “Over the past several years, California YIMBY has been working to pass and influence statewide land-use and housing legislation that negatively impacts the lives of millions of middle- and working-class Californians.

“With so much at stake, we believe California YIMBY should be transparent about its funding sources. We’re requesting that you release the names of your top fifty contributors and the dollar amounts of each contribution for the years 2018, 2019, 2020, and 2021.”

We never heard back from Hanlon and California YIMBY.

UPDATE:  In a November 22, 2022, interview with Current Affairs, California YIMBY staffer Darrell Owens lied and misled when asked about the funding for California YIMBY. He also told a whopper about AIDS Healthcare Foundation President Michael Weinstein, describing him as a “Beverly Hills billionaire” — AHF is the parent organization of Housing Is A Human Right. More details at the bottom of the article.

California YIMBY can hide contributors because of its status as a nonprofit, allowing the Big Tech lobbying group to withhold that information from the public.

In that article, Hanlon stated, “Virtually all of the money that we’ve raised has come from the tech industry. I am certainly willing to accept money from developers, it’s just that I’ve gotten a much better reception from tech leaders than from real estate people.”

Let’s repeat that: Hanlon is “certainly willing to accept money from developers.” Hmmmm.

That was more than four years ago when Hanlon said that. Housing Is A Human Right and other housing justice activists suspect that Big Real Estate has since jumped on the California YIMBY bandwagon. But no one knows to what extent because Hanlon and California YIMBY won’t divulge its contributors.

Hanlon tries to frame YIMBYs as underdogs, but that’s laughable.

California YIMBY was founded and funded by Big Tech, one of the most powerful and wealthy industries in the world. And California YIMBY most probably rakes in cash from Big Real Estate, another heavyweight industry. On top of all that, California YIMBY has a direct connection to power in Sacramento through its close and longtime relationship with State Sen. Scott Wiener.

California YIMBY must come clean about who finances its operations. Housing Is A Human Right still demands that Brian Hanlon and California YIMBY publicly release the names and amounts of its top 50 contributors. With millions of people negatively impacted by California YIMBY’s legislative push, the public should know who’s running the show behind the scenes at California YIMBY.

In a November 11, 2022, interview with Current Affairs, California YIMBY staffer Darrell Owens lied and misled when asked about the funding for California YIMBY. He also told a whopper about AIDS Healthcare Foundation President Michael Weinstein, describing him as a “Beverly Hills billionaire” — AHF is the parent organization of Housing Is A Human Right. Such bold lies and deceit underscore that California YIMBY simply can’t be trusted.

Current Affairs asked Owens about Housing Is A Human Right’s call for California YIMBY to name its top 50 contributors and if Big Tech and the real estate industry delivered cash to the organization. Owens gave an astonishingly dishonest answer.

First, Owens tried to downplay Big Tech’s contributions to California YIMBY, saying “back in the day, tech founders gave money to YIMBY groups, and by ‘giving money’ I mean $100,000, and Stripe gave $100,000 to YIMBY groups.” That’s misleading and incorrect.

As we noted above, Stripe co-founders Patrick and John Collison handed over a staggering $1-million contribution to California YIMBY and “tech bigwigs” contributed $500,000.

As recently as 2022, Duda and Big Tech venture capitalist Ron Conway delivered $50,000 each to the California YIMBY Victory Fund.

Other Big Tech executives include Andrew Sutherland and Robert McGrew, who gave $10,000 each to California YIMBY Victory Fund in 2021.

Big Tech, in other words, has contributed mightily to California YIMBY and continues to deliver the big bucks.

In the Current Affairs interview, Owens also said that “real estate developers absolutely don’t fund us. That’s not true.” Another misleading and inaccurate answer — and one that doesn’t jibe with California YIMBY CEO Brian Hanlon, who told The Real Deal he wanted developer money.

According to state filings, California YIMBY Victory Fund raked in a $2,000 contribution from real estate developer James Frost and $5,000 from Dave Rand, an attorney with Armbuster Goldsmith & Delvac, a prominent land-use firm that represents numerous developers.

And there are many smaller contributions to California YIMBY Victory Fund from real estate industry players, including $500 from John Sayles of Ensemble Real Estate Investments and $250 from Beverly Hills-based Zach Zalben of Black Equities.

Owens then went on to lie about AHF President Michael Weinstein and AHF’s housing work. He called Weinstein a “Beverly Hills billionaire” and described AHF as “the biggest slumlord in L.A.” Both are completely false.

Weinstein, who was born in Brooklyn and comes from a working-class family, has been an HIV/AIDS activist going back to the 1980s when he co-founded AHF with very little funding. It now operates in 45 countries and serves more than 1.6 million clients in places such as South Africa, Mexico, India, and Ukraine.

Over the decades, AHF, the world’s largest HIV/AIDS medical-care nonprofit, has saved millions of lives by providing free HIV drug treatment and prevention services. Weinstein is not a billionaire — and he doesn’t live in Beverly Hills.

It’s interesting that Owens attacked Weinstein. Under his guidance, AHF led the charge to repeal statewide rent control restrictions in California through Proposition 10, in 2018, and Proposition 21, in 2020. California YIMBY refused to endorse both initiatives, essentially standing with Big Real Estate, which spent nearly $200 million to kill Prop 10 and Prop 21.

In addition, as a response to the worsening homelessness crisis in Los Angeles, AHF founded Healthy Housing Foundation. The nonprofit provides low-income and homeless housing by renovating old hotels and turning them into affordable housing.

In only four years, HHF has created more than 1,400 low-income units in the L.A. area — and is in no way the biggest slumlord in L.A. It’s quite the opposite. By providing housing, while hundreds of unhoused residents die in L.A.’s streets every year, AHF and HHF are saving lives.

Owens outright lies show how low California YIMBY will stoop to hide and divert the truth from the public about its connections to Big Tech and Big Real Estate. In fact, the interview is proof that California YIMBY can’t be trusted for anything it says.

Housing Is A Human Right continues to call on California YIMBY to name its top 50 contributors.

(Patrick Range McDonald is a best-selling author and award-winning journalist. A longtime staff writer at LA Weekly, McDonald is now the advocacy journalist for Housing Is A Human Right, the housing advocacy division of AIDS Healthcare Foundation, and a contributor to CityWatch. )