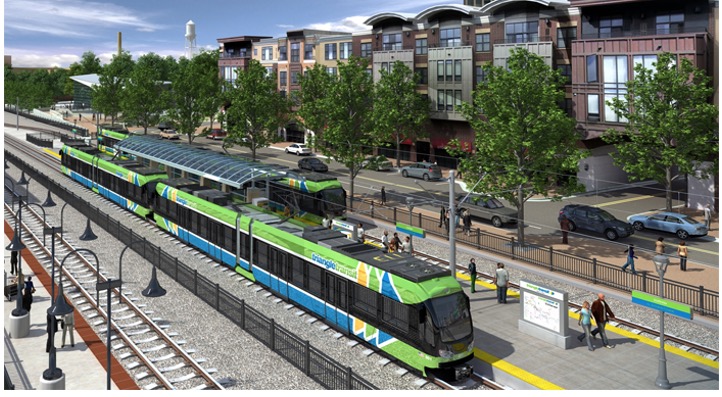 ACCORDING TO LIZ - Everyone acknowledges that there is a huge homelessness problem in California.

Where denial kicks in big time, however, is around the fiction of trickle-down housing. There is no such thing.

Furthermore, units vacated by those purchasing new market-rate homes are not going to magically depreciate, since the first thing that the landlords or new owners will do is trick out the old places so that they can make more money renting or selling them in the next go-round.

Unfortunately for those scrambling for housing, there will never be a real opening in the real-estate-for-profit Ponzi scheme that permeates Californian real estate, no opportunity at all for Angelenos of lesser income to put a permanent roof over their heads. Not for families in red-tagged tenements, not for the man sleeping on the street, not for people living in their cars.

Although Transit-Oriented Communities (TOC) housing has received a lot of play in recent years, it is to affordable housing the equivalent of greenwashing is to environmental issues. It gives the purveyors of the concept a feel-good buzz for taking action on homelessness. It gives more profit to the developers. And it gives absolutely nothing to those needing a decent place to live that they can afford.

Exacerbating the problem, at least in Los Angeles and a number of other California cities, is that existing AFFORDABLE housing near transit is now being torn down in the name of developing reasonably priced units and replaced by mostly market-rate homes which are snapped up by middle-class folks from middle-class neighborhoods who are themselves being displaced by escalating costs where they currently live.

Fact: in the Los Angeles housing market, ANY housing tends to be bought out by people pushed out of their prior neighborhoods by spiraling prices. Many call it gentrification. More correctly it’s a scam between politicians and developers to put more money in both of their pockets.

The CONCEPT of building affordable housing near public transit is a noble one. With the assumption that property values might be lower, that infrastructure already exists, and that the units will be cheaper to build (especially with those tax-dollar incentives).

And with the perceived benefit of encouraging Angelenos to take the metro and bus to work and play.

But. People still need their cars if they have to be at work early or return late or go where there are no stops within walking distance. People need cars to take the kids to school, to pick up 2x4s from Home Depot, and to bring home the groceries.

Public transit was abandoned as a concept in Los Angeles decades ago to concentrate on building the biggest and best freeway system that the car culture could buy, and it won’t go down to the mat without a fight. Public transit in the City of Angels is nowhere near where it needs to be, and waving the Mayor’s magic wand will not make it so.

How many of us can now deliver kids to playdates and pick up the laundry with a stop at CVS in the pouring rain by bus? Or on a bicycle?

Developers of TOC housing are getting waivers that reduce their costs by not having to provide mandated parking spaces or replacing them with bicycle lock-ups, but new owners/renters are moving in with sometimes three or four vehicles per unit and creating further problems in communities already stressed for parking.

Building TOC housing here in La-La Land is only adding to the shortage of affordable housing as more and more families abandon over-priced homes for something a little less expensive. Or a tent under the freeway.

There are already over eighty thousand units now standing empty in Los Angeles, some as gently used pieds-à-terre for the peripatetic rich flaunting their wealth, or priced out of ordinary Angelenos’ ability to buy or rent, or simply held empty by real estate speculators.

Vacancies, whether old or newly-constructed, don’t help the more than forty thousand homeless on the streets of Los Angeles. Building more TOC units actually adds to the numbers of the unhoused.

In the wake of the pandemic thousands upon thousands of square feet of commercial and office space stand empty and, if not repurposed, will become just a further facet of urban blight to be addressed.

Our elected officials need to come up with a creative vision to jump-start better solutions to the lack of housing that is really affordable to the people who really need it.

Housing should be a human right, should be an American right, an Angeleno right. Housing should not be for investing and profiteering and the City needs to take steps to stop these heinous practices before it can really consider ways to house our unhoused neighbors.

Allowing corporations to profit from housing while ordinary people suffer is just not acceptable in a city that purports to be progressive.

This means putting an abrupt stop to Scott Weiner who is funded by developers and related organizations specifically to push their profit-making agendas, and to Toni Atkins whose wife is a mover and shaker in San Diego real estate and their ilk at the state level. And re-educating bleeding hearts in Los Angeles who, in their rush to help, are draining our tax dollars in futile attempts to build units that could never ever be considered affordable.

Anyone with suggestions, start bending your elected officials’ ears. They have no shame and will likely seize on any workable idea to dig us out of the morass of homelessness.

Los Angeles, indeed California, desperately needs some out-of-the-box ideas to help Angelenos, or our City will become a hollowed-out husk.

But TOC housing is not the answer.

(Liz Amsden is a regular contributor to CityWatch and an activist from Northeast Los Angeles with opinions on much of what goes on in our lives. She has written extensively on the City's budget and services as well as her many other interests and passions. In her real life she works on budgets for film and television where fiction can rarely be as strange as the truth of living in today's world.)