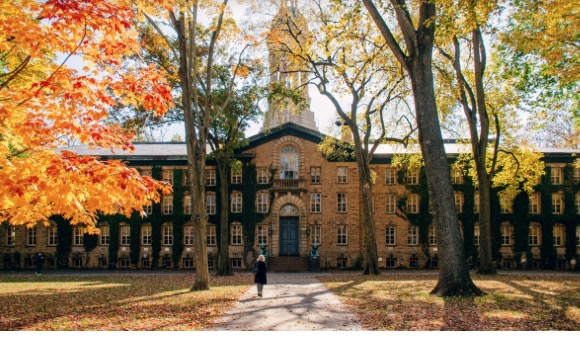 That is all well and good, but why are so many people in debt up to their eyeballs for a vaporous commodity that, in so many cases, delivers nothing? This isn’t bitter hyperbole, but tangible fact when you add up all the dropouts and the hybrid degrees in, say, comparative Latin poetry and transpersonal themes of 19th century German philosophy (the esoteric, combo degree is the product of university gaslighting. Schools aspire to fleece the quirkiest students despite an increasingly limited job market focused on technical skills). There is room, in the open-minded, expansive world of intellectual curiosity, for all seekers of wisdom who pony up.

Only 35% of freshman students will both manage to graduate and use their degrees to launch a career, and many of these careers involve sketchy middle management positions that the late anthropologist, David Graeber, deemed, “bullshit jobs.” Graeber subdivided this ghostly faction of the workforce into five categories—flunkies, goons, box tickers, duct tapers, and task masters—each a talisman of administrative bloat. Graeber argued that those who perform bullshit jobs understand that their positions are merely ceremonial—pretending to scrutinize industry regulations and accountability, or planning projects that have no value, or formulating red tape and concocting excuses for inaction. Graeber uncovered an entire industry engaged in the theatrical act of looking busy. One gains access to the world of corporate fluff with but one key—a college diploma.

Giving money away to flimflam artists is as old as money itself. Paying hundreds of thousands in tuition and buying $400 textbooks (that ultimately get dumped at the campus bookstore for $2.50), suggests a medieval prototype—the church indulgence (the practice of paying religious authorities lofty sums to act as mediators in the quest for salvation). Dividing all of humanity into those enjoying an eternity of bliss, and those suffering a timeless universe of torment is the conceptual  ancestor of our gathering two tiered class system, but the analogy may not be perfect—so called institutions of higher learning engage in a grift that competes with the US military budget for stacking green bills to dizzying heights, while the church books have crumbled to dust. Nor can we prove that indulgences failed to deliver on the promise of reduced purgatory time.

No one wants to suffer the agonies inflicted by trash talking demons armed with white hot iron rods. If an indulgence purchased an elevator ride up from the bowels of the underworld, that is an investment well spent. I do not intend to argue that a college degree has as much value as a medieval church indulgence—it doesn't—I am simply reflecting that both the church and the Ivy League know how to rake it in while maintaining tax exempt status.

Medieval church officials, to their credit, made relatively modest claims regarding their product. They neither promised to enhance your future earnings nor make you into a more desirable marriage partner. A church indulgence, like toothpaste or medicated foot powder, did only one thing—it shortened your torments in hellfire, period.

A college education, on the other hand, is lauded for so many different things that few of us know exactly what it does. If someone asked: does attending college A) Enhance wisdom and depth? B) Improve Darwinian capabilities in the struggle of one against all? C) Determine the manner in which the raw materials of the human race are organized into stratified layers within a class system? D) Decipher how far the ligament connecting $65,000 tuitions with administration pontifications about equity can stretch before it snaps? I would be utterly confused as to which of the answers is correct. A church indulgence has no such confusing ambiguity. Either your flesh is seared and scorched for a long time or a short time.

A piece written by Caitlin Flanagan for The Atlantic last year—"Private Schools Have Become Completely Obscene"—reveals that even the most privileged beneficiaries of the college system are unhappy. Students at elite private high schools, who will claim a huge chunk of Ivy League real estate, may never be crushed by student debt, but the restrictive mechanisms of social privilege jettison a significant number of aristocratic children. Prep school grads are being booted on masse from a once guaranteed niche, as Harvard and Yale acceptance letters have come more and more to resemble winning Powerball tickets.

As the elite class shrinks, and the suffering class expands, the threshing machine of American colleges rakes it in, imbued with the critical responsibility of separating the wheat from the chaff. A capitalist oligarchy cannot be lax about the details of branding each member of the ruling class. That is why we hear about college admissions cheating scandals and why Flanagan writes about angry hedge-fund parents bullying prep school teachers to change A- grades to A's. Our system of higher learning is fueled by a gusher of petty.

Biden, under pressure from voters, seems to be addressing a portion of the problem, but college debt is just a bit of fungal decay growing on a vast expanse of infected matter. A huge chorus calls for the elimination of college debt but who calls for the elimination of college? Okay, that may be too extreme—maybe college merely needs to be regulated, like toxic waste, carbon emissions, and controlled substances. At bare minimum, colleges should be investigated. Shouldn't we see the receipts for the gazillion dollars that colleges and universities have in endowments?  What secret wormholes connect college administrations to the bullshit jobs sector? Which Harvard courses taught Jeffrey Skillings (the primary architect of the Enron scandal) how to hide money?

If nothing else, colleges should be forced to more closely resemble the ancient institutions that have inspired them. It may be difficult to drum up nostalgia for the medieval papacy, but consider that Pope Leo X raised enough money through the sale of indulgences to rebuild Saint Peter's Basilica—a magnificent edifice that awes millions of visitors to this day. The institution powerful enough to put a fifth of US residents painfully in debt ought to be able to at least create wonders for the ages?

(Phil Wilson is a writer from Hartford, currently living in Northampton, Massachusetts. He has written multiple opinion pieces about the COVID pandemic, covered the border crisis after visiting Annunciation House in El Paso, and written a brief memoir about his career in community mental health for publications including The Greenfield Recorder, The Hampshire Gazette, Hampshire Life, and Current Affairs. This article was featured in CommonDreams.)