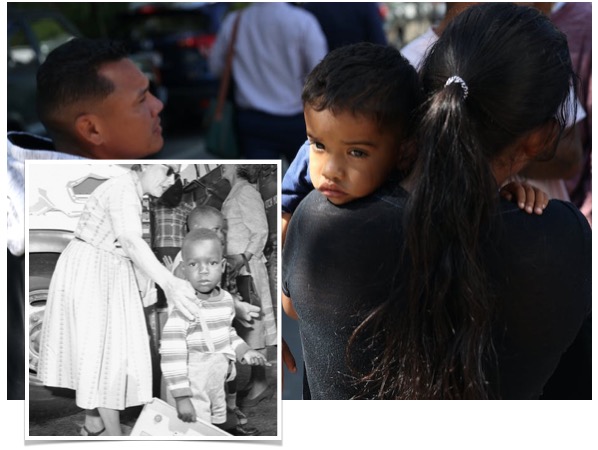 wherein he flew vulnerable human beings across the country to dump them on an island like garbage just to own Dems who it turns out welcomed them because they're not small mean racist jerks like he is - keeps getting more grotesque.

Eager to nudge the national conversation clear of the current GOP debacles - from an unhinged leader stealing classified docs to the unsettling revelation a whole lot of Americans care about reproductive freedom - DeSantis, Greg Abbott and other slimebuckets have reverted to the standby of racist fear-mongering, upping a sociopathic game of moving brown bodies around the country like juvenile frat boys in the name of denouncing an imaginary "open border" that's in fact as secure as it's ever been. Abbott has spent over $12 million busing at least 10,000 migrants to Dem strongholds of D.C., New York and Chicago; in an ugly touch, some have said they tried to get off en route in red states but were forced to stay on board, just to stick it to these bleeding hearts and never mind the brown lives affected. Then, after months of seeing Abbott get ahead in a callous fascist sweepstakes incensed advocates rightly deemed "toying with (migrants) like political piñatas," Florida's "Little Eichmann" jumped into the nasty fray.

Taking $12 million from taxpayers, DeSantis bizarrely traveled to San Antonio and picked up about 50 Venezuelans - possibly with the help of complicit DHS employees, or his other dubious "people" in Texas - who might have been hoping to try to rejoin family in Florida. Huffed DeSantis, "It is not the responsibility of Floridians to subsidize aliens to reside in our state (even though they were in Texas) unlawfully." "Aliens." Other than, less than, apart; to the Nazis, Jews were "vermin." When those hungry, frightened human beings, including a 2-year-old, finally arrived at the Vineyard, where to add to the chaos officials had pointedly not been notified but Fox News cretins had been, their chyron shrieked, "Illegals Arrive on Martha's Vineyard." Jesus. One more time, under our asylum rules, they're legal, having entered the U.S. system and been allowed to await their day in court. But to sniggering thugs on the right - dehumanization is their super power - they're a punch line: "These are all sanctuary cities until they're in the sanctuary," James Taylor et al "will be seeing fire and rain and migrants!" Even evil ghoul Stephen 'Goebbels' Miller crawled out to sneer, “A few million migrants" on Martha’s Vineyard would transform the island "into a modern Eden." Ha, good one. 'Cause it's not like these are real people or anything.

Despite those "fundamentally racist" assumptions and the "layers of deception" the Venezuelans faced - including a map leading them to a vacant parking lot - Vineyard residents welcomed them, because that's what normal people do. They brought water and food - soup, pizza, plantain tajadas - set up beds in churches, recruited high school Spanish students to come chat, contacted lawyers, who flocked there. Gradually, the grisly details emerged: The migrants had been lured with "gift" payments and repeatedly lied to, with promises of jobs, housing, immigration help and a "surprise present" at their final destination - Boston. They'd never heard of Martha's Vineyard - why would they have? The depravity of using destitute men, women, children fleeing violence as political pawns and "human garbage" for a "gotcha" moment was roundly slammed as "depraved," "repulsive," "deeply disgusting," "inhumane," and what furious Venezuelans in Florida, home to their largest diaspora,  called "a new low." From one critic: "You lie to people, you put them on a plane, you don't feed them, you don't give them the job or home you promised, all for some cheap soundbite, because you believe they are sub-human. These are 'leaders'? These are 'Christians'"? Even self-described "security hawks" were appalled by "the intentional tormenting of other human beings, especially children."

And this week came news of a smoking gun rendering the twisted scheme "not just heartless, but potentially criminal." Via the Boston-based Lawyers for Civil Rights now representing some of the Venezuelans, Popular Information obtained a shiny (fake) brochure given to them promising 8 months cash assistance, food, clothing, housing, job training, rides to job interviews, help registering kids for school and applying for Social Security, and other (fictional) benefits offered to U.N.-designated refugees but not to migrants seeking asylum. Designed to look governmental but evidently made by mediocre graphic artists lacking moral fiber, the brochure offers documentary evidence of what could be fraud, collusion, false imprisonment, disseminating false information using government funds, ethical violations and other grounds for civil and criminal liability. It's also part of the case made by lawyers for the migrants who on Tuesday filed a class action suit against DeSantis for his "fraudulent and discriminatory" actions. Their move reflects ongoing outrage against "a ruthless opportunist" eager to use others for his own political gain. "These people never grew up," says a critic of DeSantis et al. "Theyre the same high school bullies they were in their teens."

In truth there's nothing new under the racist sun, and decades  before DeSantis used suffering human beings as pawns in a sick game, Southern segregationists did it with "Reverse Freedom Rides," their response to activists "trying to destroy 100 years of workable tradition." Organized by White Citizens Councils of elite racists - the KKK "without the hoods and masks" that blacks dubbed the "Uptown Klan" - they offered false promises and free bus rides to northern cities to remove "surplus" blacks, targeting vulnerable single mothers or former felons struggling to find jobs. Charging white people had become a political "whipping boy" - the old becomes new - Amis Guthridge said they were "through with this foolishness about civil rights...We're going to find out if people like Ted Kennedy (really) do have a love for the Negro." In 1962, Lela Mae Williams and her 7 children were among 96 black pawns heading to "a promise that was a lie" on a bus to Hyannis, "where President Kennedy’s brother assures you a grand reception." An hour before arriving, Lela Mae, who kept Kennedy portraits next to MLK's, asked the bus driver to stop so she could change into a black sheath, triple string of pearls and white hat and heels. No Kennedys greeted them; the NAACP and "the decency of many ordinary people" did, but they were still "far, far away (from)  anything resembling home."

Then, it was a fringe group of racists; now it's state-sponsored racism by "a man dancing on a chain while Tucker Carlson cranks (the) street organ"; both are sickening. Amidst calls - from Newsom, Castro, Markey, a Texas sheriff etc - to investigate "the perpetrators of this breathtakingly cruel political stunt," Rachel Self, a Vineyard immigration attorney, argues the actions constitute kidnapping. She cites paperwork the migrants got telling them to use as their contact address random homeless shelters across the country, though some had ICE appointments this week in San Antonio - not Tacoma - and could be deported for not keeping them. This "purposeful derailment of the immigration process" - aka fucking with people who "walked through 10 countries in the hopes of finding safety" - could also entitle them to the protection of a U visa for "victims of criminal activity." It's one glad irony of many: After a joyful farewell from islanders, the Venezuelans are thriving at Joint Base Cape Cod, where they have plentiful food, donated baseball gear, access to multiple services and an army of lawyers working on their behalf. Meanwhile, Abbott sent 100 migrants to Kamala Harris' front yard, snarling, "There's more where that came from," DeSantis admitted Florida doesn't see many migrants, and both have been revealed as bullying assholes "trying to out-asshole each other" as "the path to success in the GOP" - the true human garbage.

"The stranger who resides with you shall be to you as a native among you, and you shall love him as yourself, for you were strangers in the land of Egypt." - Lev. 19:33-34.