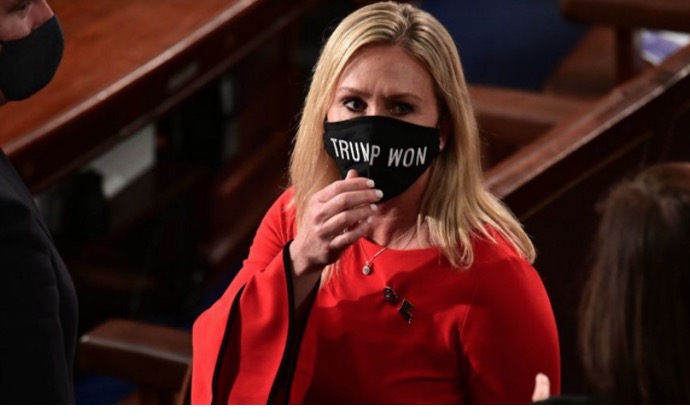 COURT RULES - Citing a recent court ruling, a government watchdog group on Wednesday urged members of Congress to remove and bar from office anyone "who betrayed their constitutional oaths by engaging in the January 6 insurrection."

The letter from Citizens for Responsibility and Ethics in Washington (CREW) to U.S. lawmakers follows a New Mexico court ruling earlier this month that the 2021 attack at the U.S. Capitol was an insurrection, and ordering Otero County Commissioner Couy Griffin to step down.

CREW had filed a suit arguing that Griffin's actions before and on January 6, 2021 amounted to engaging in an insurrection, and thus, under Section 3 of the 14th Amendment to the U.S. Constitution, he should be disqualified from holding public office.

Section 3 prohibits anyone who, having taken an oath to support the U.S. Constitution, engages in "insurrection or rebellion" or provides "aid or comfort to the enemies" of the United States from holding any civil or military office at the state or federal level.

CREW's letter notes that the ruling against Griffin—who joined the mob of then-President Donald Trump's supporters that breached multiple security barriers at the Capitol—explains "that an insurrection need not 'rise to the level of trying to overthrow the government.' Rather, an insurrection is an assemblage of people acting through force, violence, and intimidation by numbers to prevent the federal government from performing a constitutional function—a definition that indisputably applies to the January 6 attack."

"The ruling also cites Reconstruction-era case law establishing that a person can be disqualified under the 14th Amendment even if they have not been convicted of a crime and even if they did not engage in violence," the letter continues, arguing that the court's "factual findings are instructive" for others who in any qualifying way supported the January 6 insurrection.

"Although the court's decision sets a high bar for disqualification, we believe there are other current and former office holders throughout the country who, under the court's standard, should be disqualified from office," asserted CREW, without naming them. "The obligation to exclude and disqualify these individuals will be borne by many federal and state officials throughout our country, but Congress has a particularly important role to play."

Noting the long history of Congress enforcing the disqualification clause, the watchdog warned that "in the unprecedented context of the January 6 insurrection—an event that marked the first-ever presidential transition marred by violence—failing to enforce the Constitution against those who sought to subvert a free and fair presidential election imperils the very foundations of American democracy."

CREW's call for action comes amid a flurry of warnings about the danger of Trump—who's expected to run for president again in 2024—and his Make America Great Again (MAGA) movement leading up to the November midterm elections.

"Donald Trump is a fascist. Period," Congresswoman Pramila Jayapal (D-Wash.) declared this week. "We have to reject this dangerous movement across the country in November—our democracy depends on it."

According to a recent FiveThirtyEight analysis, 195 GOP candidates on the ballot in November for the U.S. House and Senate as well as governor, secretary of state, and attorney general support Trump's "Big Lie" that Democrats stole the 2020 presidential election. Another 61 candidates doubt the results, and 115 have refused to clarify their position.

Shortly after the MAGA mob was cleared from the Capitol last year, 147 Republicans in Congress formally objected to the presidential election results. The congressional panel investigating the attack has revealed that multiple GOP lawmakers sought preemptive pardons from Trump related to their efforts to overturn President Joe Biden's victory.

While there is no evidence that Trump granted any such requests at the time, the twice-impeached former president said earlier this month that if reelected in two years, he would "look very, very favorably" at pardons for insurrectionists.

However, in terms of holding public office, CREW's new letter highlights that "a disqualification under Section 3 of the 14th Amendment cannot be cured through a presidential pardon and can only be removed by a two-thirds vote of Congress."

(Jessica Corbett is a staff writer for Common Dreams where this article was published.)