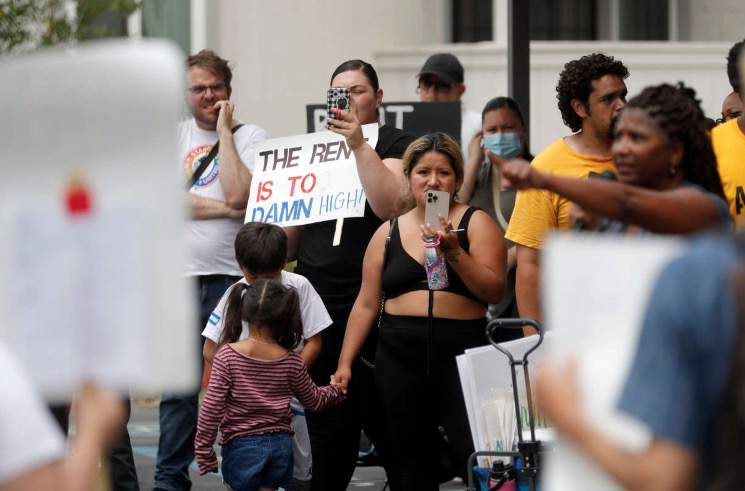 INFLATION WATCH - Inflation cooled off and remained unchanged during the month of July, providing President Joe Biden and vulnerable Democrats a reason to celebrate ahead of the midterms.

However, on Wednesday, the U.S. Bureau of Labor Statistics released its consumer price index, which reports that the cost of paying rent inflated by 6.3 percent over the past year, the largest increase in 35 years and a clear signal that the housing crisis enflamed by the COVID pandemic continues.

The rent inflation index reflects landlords raising rents on existing tenants; it does not include the prices of new leases when tenants move. A monthly report from Apartment List, a company that tracks rental data, found that when price hikes in new leases are included, rents actually grew by 12.3 percent over the past 12 months, down from a peak 18 percent in January. Nationally, the median cost of an apartment reached $2,000 for the first time ever in June.

Despite billions of dollars in federal assistance for renters and landlords, eviction rates in cities across the country climbed to pre-pandemic levels in 2022 after moratoriums on kicking people out during a health crisis expired last year.

Housing advocates say corporate landlords are knowingly profiting off the misery of tenants suffering under high prices for food, health care, school supplies, and other essentials, but Congress is not expected to act. The Inflation Reduction Act, passed by Senate Democrats this week, would invest $370 billion in climate, energy and environmental justice programs but notably does not include provisions focused on affordable housing.

Rev. Rhonda Thomas, a faith-based racial justice organizer in Florida, said the housing and climate crises are colliding, and policy makers must consider the “people who have suffered the most” from these intersecting emergencies as the nation transitions to cleaner energy.

“In Florida, the climate emergency has created a housing crisis that, again, adversely impacts communities of color,” Thomas said in a statement released by a coalition of Black women in response to the legislation this week. “Housing prices have skyrocketed even as wages have stagnated.”

Instead of focusing on Congress, many housing advocates are targeting the Biden administration, which they argue can regulate the rental market through a number of federal agencies. Ahead of the latest inflation data on Tuesday, a coalition of more than 220 housing and community organizations demanded Biden declare a national housing emergency and outlined a plan for taking federal action without waiting on Congress.

For example, the Federal Trade Commission could issue a regulation defining excessive rent increases as an unfair business practice and enforce the standard through lawsuits and administrative proceedings, according to the coalition. The Securities and Exchange Commission can impose disclosure requirements when publicly traded corporations raise rent on tenants, and regulators can investigate new bundled securities backed by rent and mortgage payments that are a hot new thing on Wall Street.

Such federal action could hold landlords accountable to the public but would not provide direct relief to struggling renters. The administration could consider rent controls for landlords working with federal housing programs, but these types of regulations would only help some of the lowest-income tenants.

Rent is often the largest line item on most household budgets, with families spending an average 35 percent of their income on housing in 2020, according to federal data.

For households on low or fixed incomes, rent increases mean choosing between paying the landlord and buying essentials, according to Michael Mitchell, a director of policy and research at the Groundwork Collaborative, a Washington, D.C.-based think tank.

“For the median tenant in one of the 50 largest American cities, you are paying $200 more now than you were last year, and that’s money people can’t spend on groceries and school supplies,” Mitchell told reporters on Thursday. “When the alternative is homelessness, it really puts tenants in a bind.”

Vanessa Armour knows this story all too well. An activist and retired postal worker living in Las Vegas, Nevada, Armour was excited about the prospect of spending her retirement in her current apartment when she moved in. However, her landlord has tacked on fees for “assessments,” Armour said, effectively raising her $1,100 rent by more than $200 per month. So, Armour said, she was forced to leave retirement and take a part-time job; her fixed income was no longer enough to afford basics such as food and medication.

“Should I live in the dark, skip my medications, or do I just not eat?” Armour said during a Zoom call on Thursday. “I worked so damn hard for 38 years. I should be able to enjoy my retirement.”

Armour, a leader of the Progressive Leadership Alliance of Nevada, said she and other advocates held a meeting this week with Sandra Thompson, the deputy director of the Federal Housing Finance Agency. Like millions of other people, Armour lives in a property benefiting from federal loans under the Fannie Mae and Freddie Mac programs created by Congress, and Thompson is the top regulator overseeing the programs, which are designed to allow liquidity in the housing market and keep prices down.

Thompson pledged to investigate her agency’s power to tie federal financing for landlords and property managers to new protection for tenants against harmful rent increases, according to Armour. The White House announced a plan in May to bolster the housing supply with new infrastructure funding and zoning reforms. Yet the question of whether federal agencies will muster their regulatory power to challenge landlords and tackle rising rents — which are undoubtedly on the minds of voters — remains to be answered.

(Mike Ludwig is a staff reporter at Truthout based in New Orleans. He is also the writer and host of “Climate Front Lines,” a podcast about the people, places and ecosystems on the front lines of the climate crisis. Follow him on Twitter: @ludwig_mike.)