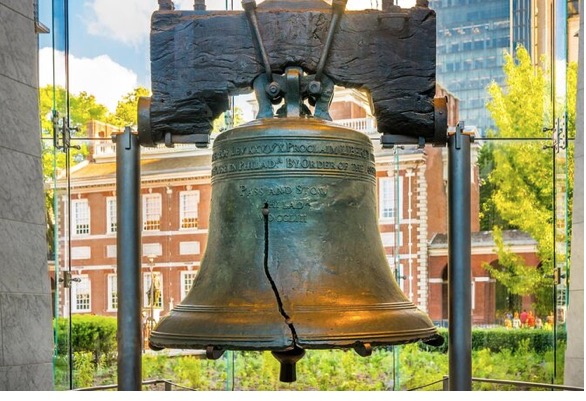 ACCORDING TO LIZ - Today the United States celebrates its official 246th birthday.

If the country was a person who could look back over its life, what would it think?

This year, I would posit that the country would weep for the victims of the renegade jurists on the current Supreme Court while celebrating the swearing in of its newest member, Ketanji Brown Jackson, as the first black woman on that august body.

That it would cry for the children murdered in Uvalde, but celebrate the raw honesty of the House January 6th Committee hearings.

That it would regret being drawn into another war but celebrate Volodymyr Zelenskyy standing up to Putin and sees in the resoluteness of the Ukrainian people the images of the colonists who stood up to the might of the British Empire.

The founding fathers (and the women who stood behind them) emphasized mankind’s divine capacity for reason and observation so that our personified country would definitely celebrate the advances in medicine and science and bemoan the fact that we don’t always share our knowledge with others.

The United States of 1776, or even 1876, would be amazed that four years before its 200th birthday, the world would watch two Americans walk on the moon and that, in the past 25 years, NASA has sent five mobile Rovers to explore the surface of Mars.

It would be fascinated in how micro-processors and cell phones and the internet – all developed by Americans – have profoundly changed our lives.

Do we have the right to the parades and fireworks, flags and bunting, unbridled patriotism that accompanied Fourth of July celebrations when we many of us were younger and much more idealistic?

Because the positive emotions engendered by patriotism can rise above our quotidian concerns and lead to an expanded altruism which is what we need today to address the challenges of our time.

The purpose of our laws is not to abolish or restrain freedoms, but to preserve and enlarge them.

We have a great deal to be thankful for. Over the years the rights of blacks and indigenous people, immigrants, children and the elderly, workers and homemakers, non-binary Americans and those of all religious affiliations, and the poor have been brought into the mainstream and, so long as their rights do not impact the lives of others, have been made equal.

In 1765, John Adams wrote that a native of America who cannot read and write is as rare … as a comet or an earthquake.

However imperfect, we have pursued the early colonists’ belief that a free society requires a broad program of general education and built on it, offering higher education the basis for success to more and more Americans.

We have an obligation to the future. All our futures.

This is a divisive time across our country between those on the left and on the right, between Democrats and Republicans, between Trumpists and progressives, between those who use fiscal conservatism for short term profits and those who pursue long range goals for economic prosperity for everyone.

They are all of our brothers and sisters and we need to love them for what they are, not what we would like them to be.

We also need to understand that the only thing necessary for the triumph of evil is for good men to do nothing. So step up and do something.

American citizen-by-choice Albert Einstein said: “Strive to not be a success, but rather to be of value.” He admired that individuals in America were encouraged to “say and think what they pleased" without social barriers and, as a result, inspired more creativity.

Einstein is also credited with saying that "in the midst of crisis, lies great opportunities."

If that is truly the case, then July 4, 2022 is truly a day of great promise, one where any American can seize the opportunity to mend our society, rescue our democracy, and help lead us all into a future of promise and hope.

On its 246th birthday, we can say with assurance that the people of this country have done much. And have the chance to do so much more.

Like the heroes of the American Revolution, each of us needs to fight for our future, our rights and freedoms, the health of our planet, and for justice for all.