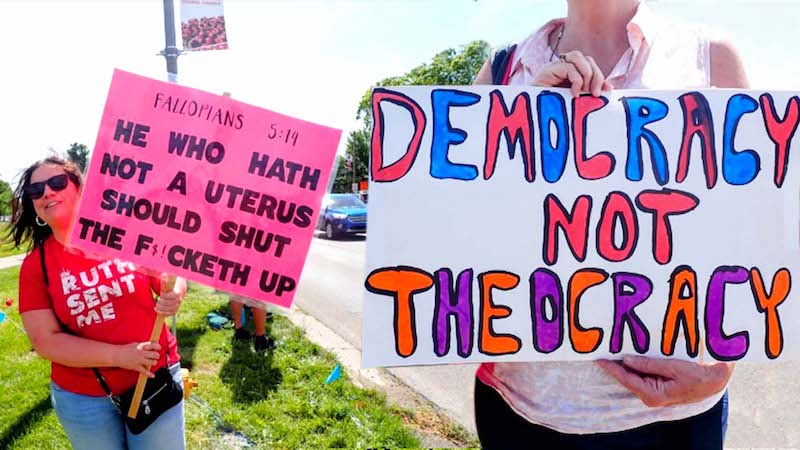 ACCORDING TO LIZ - Weep for the women whose rights have been stripped away. Grieve for the movement towards a more equitable society cut off at the knees.

Sob for the loss of a reputable Supreme Court and that the current appointees are on a mission to impose religious and corporatist beliefs on the totality of the American populace.

The Alan Paton novel about social inequality in mid-twentieth century South Africa from which the title of this article is borrowed, has a number of parallels for the United States 74 years on.

The deep racial and economic divisions that ripped apart the fabric of Afrikaner South Africa society, eventually toppling the apartheid government have more recently manifested themselves in twenty-first century America and culminated in this excrescence called the current Supreme Court.

What has this court built? It sucks on the teat of the American people but only exists to destroy.

It claims to respect the division of church from state which was a founding principle of the United States but it appears to operate as the enforcer of small-minded sectarian beliefs, beliefs that actually stand in direct conflict to the tenets of the Christian Bible.

It claims to put life for a few insensate cells before those of mothers, before the rights of children and cops not to die from unrestricted use of guns.

It claims to be on the side of justice and equality while carving exceptions for the interests of their friends and families.

It claims to be for family values while two members of the court are known sexual predators and a majority abjure their oath to be non-partisan by promoting the profit of special interests.

For gun sellers and coal magnates and Christian organizations, but not for voters and children and working men and women.

Clarence Thomas also argues that by the same rationale used in overthrowing women’s rights, the Supreme Court has a duty to “correct the error” of prior precedents.

And that the reactionary Trump Court should move forward on banning the 57-year-old right to contraception, reversing the ruling invalidating sodomy laws that made same-sex sexual activity legal across the country, and throwing out the case that allowed same-sex couples to marry and have equal rights to their heterosexual counterparts.

These are basic obligations to the American people that are guaranteed under the 240-year-old Bill of Rights which specifies that, contrary to Samuel Alito’s pusillanimous opinion, “the enumeration in the Constitution, of certain rights, shall not be construed to deny or disparage others retained by the people.”

The most important right any person can have is the right to control their own body. In taking this right away from women, these six self-righteous jurists have set themselves apart from the public they are supposed to serve.

Note well, there exists a cavernous fissure between the right to choose an abortion and any mandate to have one and that these two principles should not be conflated.

And it wasn’t so long ago that black and minority girls were forcibly sterilized by court order.

Despite what those behind this recent travesty may think, this ruling will not stop or diminish abortions. It will only ensure that more of them are unsafe and that more women will die when removal of a fetus is medically necessary.

The first girl who dies because of a botched abortion linked to this Supreme Court decision is our first martyr and the six justices responsible should be arrested and tried for the murder it is.

The first woman who dies because a piece of ectopic protoplasm, a parasite that these judges have ruled cannot be medically removed to save her life will be our next martyr.

Such deaths are not manslaughter, they are not involuntary, and they are not accidental. These six justices have conspired to intentionally murder women and children; this ruling is a specific act that advances such murders.

For these deaths and for all those that follow, bring on the murder charges – no black robe can save these six Supreme Court justices from prosecution for a felony.