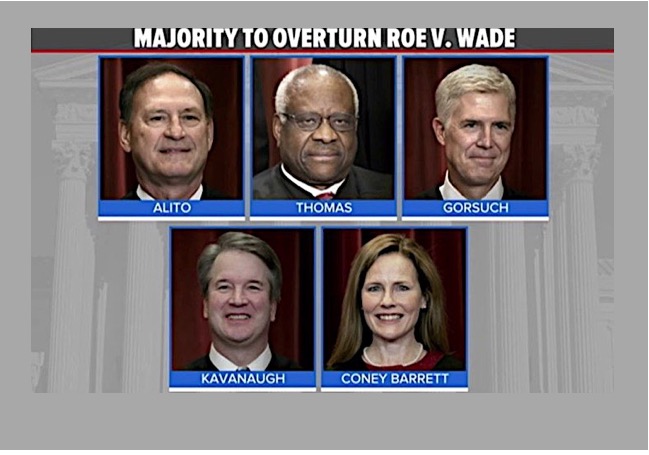 GUEST COMMENTARY - Roe v. Wade was just overturned, which marks an overplayed fear among the left side of the political spectrum, ironically during a Democratic Biden administration.

So finally, after freaking out for years, it finally happened. And it happened through a series of events the left created for themselves exposing what a shaky foundation the original was on.

Brought to you by the 6-3 conservative Supreme Court, let’s dissect this cultural moment and how the perfect storm was created.

First of all, Roe v. Wade was always on shaky ground. The very simple conclusion of why it was overturned through the Dobbs decision was that the original 1973 ruling was moot to start with. Why is the Federal government meddling in an issue like this to start with? When America was founded, it was founded to give “we the people” the freedom to govern ourselves as we wish. It also allowed for individual states to create their own laws especially on civil domestic matters.

Nowhere in the Constitution does it give a woman the right to abort their baby, which I must remind you, is another independent sovereign life, not just a clump of cells. So case closed, it was a 49 year journey based on an error. But there are valuable lessons to be learned from this decision.

The ugliness of the words used from the Left seeks to minimize the sadness of the act. Abortion is “to abort” which is what you do when you end a computer program that’s freezing up and you “get rid of it”.

Or “it’s just a fetus” minimizes the value of a life that could do great things. And please don’t feed me the very cynical “oh, they’re going to grow up in an impoverished lifestyle and will end up criminals in society”. The premise of that is so negative and frankly, elitist and possibly racist: so if you grow up poor, you have no hope? America has been founded exactly on the fact that people come here, as immigrants or grow up impoverished and make something of themselves, despite their circumstances and “handicaps”. To terminate life based on that is beyond sad.

And don’t get me going on “it’s a clump of cells”. What a sad way to live and think. But that’s the left for you.

So let’s move on to the bed the left made for itself during this whole 49 year detour we took in our culture. The left screamed so loud about this over the years, over every presidential debate with the media’s debate moderators from Candy Crowley to Chris Wallace bugging every Republican presidential candidate about this.

Sooner or later, you cry wolf too much and no one listens. And people start questioning you. They question, “why are you so adamant about this? Let me do my own research and figure it out for myself”.  Donald Trump had many great moments during his upset win over Hillary Clinton but the one that stood out for me was when he proudly said he would appoint pro life justices and get Roe v. Wade overturned. He answered clearly and simply, and kept a straight face. Trump even accurately predicted he would appoint 3 judges which is how history played out. Mind blown!

By 2016, when Donald Trump said this, it seemed so ridiculous to the elite. They assumed because it was over 4 decades ago and abortion had become such a part of our culture, that people would find this ridiculous. I had former friends post daily unhinged posts about how ridiculous Trump was and how he would never win. Keep telling yourself that. In the end, there were enough people to vote him in and certainly he got more votes than previous nominees, McCain and Romney.

So this movement, which they want to deem crazy and fringe was actually pretty mainstream.

Priorities had shifted. Enough people started questioning abortion from a legal standpoint and also a moral one. Being on the ground, I saw these discussions unfold. Many of the Asian and Latino communities have Catholic roots which have always been pro life. I certainly grew up with the messaging. But in my college years, I rebelled and tested those beliefs and saw the stories of people I worked with or interacted with in the community.

These were stories of older women who regretted their abortions, middle aged women who lost their ability to have children after an abortion and young women who simply asked, “if I aborted my baby due to advancing my career, why am I finding that I could have juggled both?” Stuff the media and the left will never talk about, while our everyday people live with the consequences of an abortion aftermath.

In addition, we were starting to see that over 90 percent of abortions were elective and didn’t have to do with the bogeyman scenarios the left created. Sorry, but rape and incest don’t even constitute a sizable majority of abortions. And in cases where the woman’s life is in danger, almost every circumstance would go to saving her in every state, including ones outlawing abortion.

I can’t be the only one who got to see this play out in the lives of people I knew well. I’m not a fan of children, never have and probably never will. As an only child growing up, I was always hanging out with older people and I’m not a particularly good mentor in the traditional sense. But I do know many are not like me: they love children and are equipped with a patience I don’t have. Some of these great parents were fed the lie that abortion is just “business as usual”. The emotional impact and the negative repercussions are felt through the rest of their lifetimes.

I will never forget a screening I threw of the movie “Unplanned” at Orange Coast College in 2019.  We had a great attendance and a panel afterwards where women shared their stories about abortion. A young man came up to speak and talked about how his girlfriend got pregnant and aborted their baby without his knowledge. He only found out after the fact that this happened and his girlfriend simply assumed he didn’t want the baby. If only they had the conversation, he would have loved to keep and raise the baby. Now the action was done and it’s too late. He broke down in tears as he recounted this story. This is what happens when something gets normalized in a culture.

Abortion is not a good thing. If you’re for the right to “choose”, there are levels beyond the woman’s right to make a decision. There are men involved and also the baby. That is what is lacking in this society. The care for another in the things that really matter, like life and the ability to grow up and realize your potential?

Now, the left also made huge missteps beyond their tone deaf monotone messaging. They also made mistakes on their political strategy.  Through their arrogance, Ruth Bader Ginsburg did not retire when she should have, during the Obama administration. Many of these justices on the left are addicted to the power and position that they choose not to exit stage when appropriate. What happened was the infamous RBG died during the Trump administration giving him an extra appointment into the lifetime court, allowing for this to happen. Hilary Clinton, being the worst candidate the Democrats could put forward in 2016, also helped greatly in this process, as her lifetime lying and disingenuity shined through.

But the funniest part in all of this, is that we had riots the night of and the day after in Los Angeles and New York, two localities that will not only be unaffected by the Roe v. Wade overturned decision, but may actually see an uptick in abortion providers. Roe v. Wade merely puts this domestic issue back to the states for them to decide on an individual basis. If you really want to have an abortion, you can still travel to Los Angeles or New York to have one. So when the left gets overdramatic and hyperbolic about clothes hanger abortions and back alley operations, they are being simply disingenuous.

So unlike what the left has peddled to me for years, that they’re so above emotionality and this is merely a woman’s right to choose, there are many holes in that positioning. They are reacting emotionally to a very matter-of-fact decision that merely puts the authority to the individual states. And they can’t even comprehend that detail to the point they’re rioting and destroying private property because they want to stick it to conservatives and Republicans. Some of them even claim to be Christian. But I urge them to examine their beliefs and grapple with this issue for themselves and maybe figure out what I figured out. Some of the most important people in my life now would not be in my life as they were almost aborted as babies. I would challenge that the left are actually the heartless ones judging by their irresponsible actions and inability to process factual information and react so emotionally and violently when things don’t go their way.

(Marc Ang ([email protected]) is a community organizer in Southern California and the founder of Asian Industry B2B. He focuses on the minority conservative experience. Marc’s book “Minority Retort” will be released in 2022.)