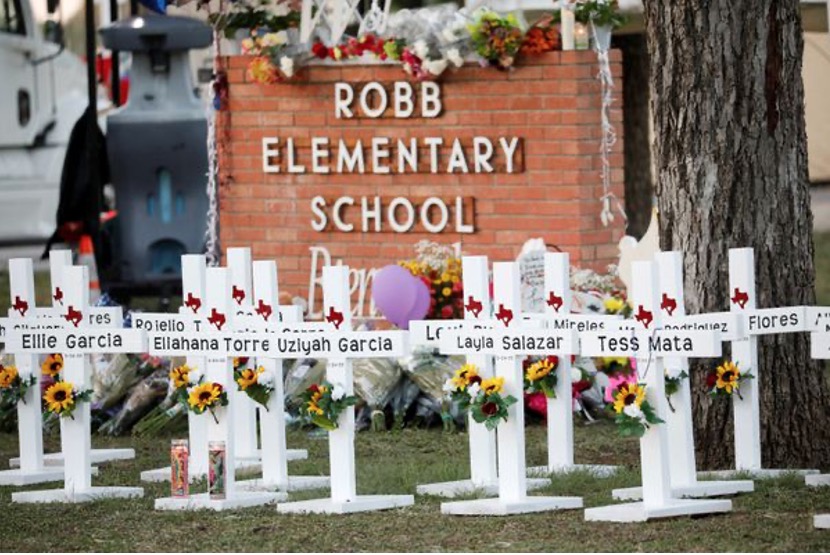 ACCORDING TO LIZ - Some people argue that it is disrespectful to the dead to use such a tragedy to score political points.

But this is EXACTLY the time to make a difference, to honor the dead by ensuring that others may live.

Damn it! We need to kick the folks who piously call for a moment of silence in the ass and ask for some action, not for just a moment but for the rest of our lives.

This is definitely the time to damn those who oppose regulation to hell and encourage them not to come back again. We don’t want them and we certainly don’t need them among the living, threatening our future.

Senator Chris Murphy of Connecticut said “This only happens in this country and nowhere else. Nowhere else do little kids go to school thinking they might be shot that day.” Although I suspect that it also applies to Yemen, Ukraine and Afghanistan, it’s a pretty sorry statement about public safety in the United States today.

Handguns exist for only one reason – to kill people.

More than 35 people are murdered with a gun in the United States each and every day.

The FBI reported that the frequency of “active shooter” incidents, where someone tries to kill people at random in a public space, has doubled since Parkland with a 50% increase in this last year alone.

The sheer volume of guns in Americans’ hands and the angst and depression permeating our lives today is driving that increase. Chiefs of police across the country is what used to be minor altercations now too often escalate into shootings and murder.

Four years ago, when the Parkland murders happened, there were some 300 million guns in this country; right now there are about 400 million, more than the entire Russian and Chinese armies combined. How can this POSSIBLY be good for our public safety?

Nearly anyone over 21 can carry a handgun in Texas without a license. So, while it’s not ok for a woman to have an abortion to save her own life, in Texas it is perfectly legal to have that laughing sentient child shot to death at school?

And instead of doing anything our elected officials choose to pray.

I’m exhausted by moments of silence – stop the silence… And stop the carnage.

Our scurrilous Supreme Court is poised to strike down a New York law that requires anyone who wants to carry a gun in public obtain a permit, and mandates that the wanna-be public gun-toter demonstrate a real need for self-defense to get that permit.

Once over-turned, the trickle of lawsuits against gun violence reduction legislation will turn into a torrent, eviscerating state laws that serve to protect their residents and welcome the Wild West of more Uvaldes, more Parklands, more Sandy Hooks.

This is a public health crisis but too many of our elected officials continue to cave to the power of the gun lobby; when the Centers for Disease Control and Prevention tried to research gun violence decades ago when it could have had some real impact, Congress cut its funding.

We need to insist every single one of our elected officials strenuously advocate for reducing gun violence. Gun regulation makes a difference.

Since implementing more effective gun laws, firearm homicide rates in Connecticut dropped 40% and suicides by 15%, while the easing of gun laws in Missouri led to a 25% increase in gun homicides and 16% in suicides.

Let’s focus on becoming a kinder gentler people. Without caring for others, without acknowledging that sometimes individual rights must give way to the greater good, America will never become great again.