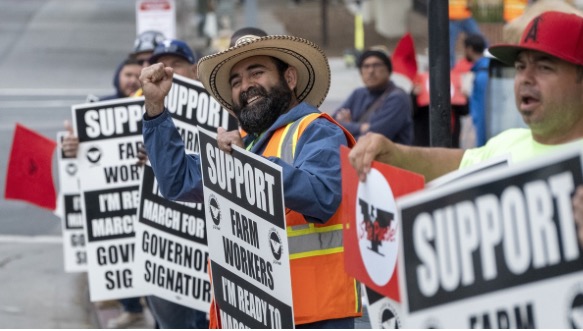 UNIONS - After vetoing similar legislation last year and threatening to do so again last month, California Gov. Gavin Newsom on Wednesday signed Assembly Bill 2183 into law, making it easier for farmworkers in the state to participate in union elections.

The Democratic governor's about-face on the measure represents a major victory for labor leaders. It follows a monthslong push by United Farm Workers of America (UFW) and the California Labor Federation (CLF) and comes in the wake of pressure from President Joe Biden and two high-ranking national Democrats with California ties—Vice President Kamala Harris and House Speaker Nancy Pelosi.

"This is an incredible victory," said UFW president Teresa Romero. "Starting next year, farmworkers can participate in elections free from intimidation and deportations. ¡Sí se puede!"

A.B. 2183, which the CLF called "the most consequential private sector organizing bill in our state's history," gives farmworkers a streamlined way to unionize without having to cast a ballot at a polling place on or near growers' property following a monthslong anti-union campaign.

Proponents say the newly enacted law, which contains several provisions aimed at preventing union-busting and was opposed by dozens of agriculture industry groups, will make it harder for bosses to subdue and retaliate against the workers who provide most of the nation's fruits and vegetables, many of whom are undocumented and fearful of being deported.

When California's Democratic-led Legislature approved the bill last month, Newsom's office expressed opposition. The governor only signed it after his administration, the CLF, and UFW "reached a 'supplemental agreement' on provisions that will be introduced in the next legislative session," the New York Times reportedWednesday.

According to the Associated Press: "The agreement includes a cap on the number of unionization petitions over the next five years and will allow state regulators to better protect worker confidentiality and safety, Newsom's office said. It would do away with an option for workers to unionize through mail-in voting that is contained in the current language, but keeps a 'card check' election process."

Under the revised law, farmworkers will still have the opportunity to "vote from home or anywhere else they feel comfortable," reducing the likelihood of employer intimidation, UFW legislative and political director Giev Kashkooli told the news outlet.

As the CLF explains:

Majority sign-up, or "card check," allows workers who want to join a union to sign a card authorizing the union to represent them in collective bargaining. If a majority of workers sign cards, the cards are submitted to the National Labor Relations Board (private sector) or the Public Employment Relations Board (public sector). If the Board finds that the majority of workers want a union, the union is entitled to recognition. In California, public sector employees already have the right to majority sign-up; all workers should be able to organize under this fair and democratic system.

In a video, Romero told those who led and supported the fight for free and fair union elections that "this is your victory."

"Every one of you who struggled and donated your time and your energy to get this done," said Romero. "Farmworkers organized and sacrificed to make their voices heard and to pass A.B. 2183."

Starting on August 3, as KCRA reported Wednesday, UFW members embarked on "a 24-day, 335-mile journey from Kern County, near Bakersfield, to the state capitol, a march that civil rights activist César Chávez first led in 1966."

Although Newsom disappointed farmworkers by announcing near the end of their march that he "cannot support an untested mail-in election process," labor organizers around the state—with an assist from Biden and other top Democrats—continued to hold rallies and eventually won important reforms.

On social media, the CLF wrote: "This victory belongs to every farmworker who marched and sacrificed. It is shared with the whole California labor movement, who mobilized and stood in historic solidarity with the United Farm Workers. The fight of farmworkers is the fight for all of labor."

That message was echoed by Sara Nelson, president of the Association of Flight Attendants-CWA, who said that "this is what happens when we organize with urgency. Together, we can win."

The effort to secure free and fair union elections follows "years of dwindling union membership among California farmworkers," the Times noted. "There are more than 400,000 agricultural workers in the state," but the percentage who are unionized is "statistically zero," according to recent estimates based on data from a 2020 Bureau of Labor Statistics survey.

"In this historic time when workers want a union more than ever before, everything we do—including legislatively—must be focused on organizing," CLF chief officer Lorena Gonzalez Fletcher told the Times on Wednesday. "It's natural that in California, our farmworkers will be leading the way."

Also on Wednesday, Newsom signed A.B. 2530, which protects the healthcare benefits of striking workers. As Unite Here put it, the newly enacted law allows workers to "exercise their right to strike for better jobs without jeopardizing their families' access to care."

In a statement, Gonzalez Fletcher said, "Workers have the right to stand up to their boss and go on strike to improve wages, working conditions, and for a better life."

(Kenny Stancil is a staff writer for Common Dreams where this article was featured.)