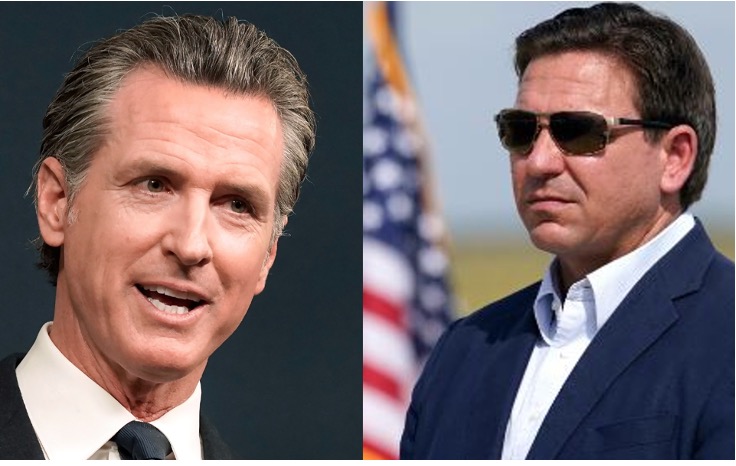 CALIFORNIA WATCH - Should Floridians get to vote in California elections? Should Californians get to cast ballots in Florida?

These questions might seem strange, but they’re not. Gov. Gavin Newsom broadcast his first re-election TV ad not in California but in Florida, appealing to Floridians to either join California’s fight against the policies of Florida Republicans, or move to California. In response, Florida Gov. Ron DeSantis blasted California policies and accused Newsom of treating Californians “like peasants.”

The tussle has been dismissed as partisan trolling, and evidence of both governors’ presidential ambitions. But its import is broader than that. Unwittingly, Newson and DeSantis are opening the door to a novel democratic idea with global implications.

The idea has been called “reciprocal” or “consociated” representation.

The dictionary definition of “consociated” is “brought into association.”  In democracy, “consociated representation” would give people the power to vote for representatives in places with which they might feel association, but are not their own cities, states, or nations.

The idea should have appeal because, especially in a hyper-connected world, the decisions of governments other than our own can have profound effects on our lives. Consider how trade and manufacturing policies in Mexico or southeast Asia have changed the economies of American communities. Or think of your home region, and how the decisions of a big city government can have profound effects on the economic prospects, transportation options, or safety of those who live in surrounding suburbs.

Or—in the context of the Newsom ad, which says that Florida’s educational and health policies threaten basic freedoms—consider how the politics and policies of big states like California and Florida can affect each other, and other states’ and national policies as well.

Florida under DeSantis has led a nationwide attack on teachers’ freedom to say what they want in classrooms. The state has also limited the rights of women and transgendered people—so much so that California is changing laws and starting programs to make itself a sanctuary for people who must leave Florida—and other states—to exercise their rights. Meanwhile, California routinely uses its size and leverage to try to shape laws elsewhere, on matters from climate change to immigration.

A harder step would be to form another consociation with other large states with which it sometimes quarrels—imagine California, Texas, Florida, and New York agreeing to allow their citizens to elect representatives to each other’s legislatures.

In such a context, Californians deserve to have more of a say in what Florida does—and, yes, vice versa.

But how? A smart and coherent proposal for consociated representation comes from Joachim Blatter and Johannes Schulz, political scientists at the University of Lucerne, Switzerland, writing in the European Journal of International Relations.

Blatter and Schulz argue that globalism has allowed international corporate elites, powerful national leaders, and unaccountable international organizations like International Monetary Fund to have undemocratic influence over people in other countries. This, in turn, has inspired populist backlashes that polarize politics, threaten the unity of federal systems like the European Union or the United States, and undermine democracy.

Their answer to this major threat is to expand democracy, and link voters in different nations and states. Specifically, Blatter and Schulz argue that governments whose policies overlap should “mutually grant their citizens the right to elect representatives not only in their domestic parliament, but also in the parliaments of ‘consociated democracies’.”

Under their proposal, these “foreign” voters could not elect many representatives in other places—only a handful, a tiny fraction, of your parliament or Congress or legislature would represent people from other places. And they say legislatures should expand to accommodate these new “consociated” representatives—no one would lose representation in the process.

It’s a modest step, but one that could “channel popular dissatisfaction into productive lines” including actual conversation and collaboration between states, Blatter and Schulz write. Systems of what these two scholars call “horizontally expanded and consociated democracies” could offer at least a little defense both against internal authoritarianism and against external enemies (like Russia and China) that seek to exploit divisions within democracies.

Consociated democracy would be a natural for California, which sees itself as a future-shaping nation-state. To start, it would be easier for California to negotiate with other Western states that are already political allies—Oregon or Washington—to form a consociation of democracies. A harder step would be to form another consociation with other large states with which it sometimes quarrels—imagine California, Texas, Florida, and New York agreeing to allow their citizens to elect representatives to each other’s legislatures.

But such arrangements, while novel, are not entirely new. Blatter and Schulz note that as more people have multiple national citizenships, it’s become more common to vote in multiple countries.

Elements of consociated democracy are already present here in California. The city of Los Angeles allows people to vote in local neighborhood councils even if they don’t reside in that neighborhood—having even a tiny interest in a place (even if it’s only stabling a horse there) gives you democratic rights. And the state of California allows people and groups from other states to sponsor and qualify ballot initiatives that enact laws and amend our state’s constitution. California’s legislative term limits and animal rights protections were brought to us in this way by non-Californians.

For California, it might be easiest to introduce consociated representation at the local level.

Your columnist, for example, feels strongly that he should be able to vote in Los Angeles city elections even though he lives in a small city that borders L.A.

Here’s my logic: The media non-profit where I work is based in Los Angeles. I spend most of my leisure time in L.A. (shopping, eating, enjoying sports and other entertainment), and pay local sales taxes. And for transportation, I depend on roads and trains overseen by L.A. officials.

So why shouldn’t Los Angeles empower me—and residents of other surrounding cities—to vote for a couple of additional members to represent us on the L.A. city council?